Just like the snapshot, this final version booted up superfast with LiveUSB. The first thing I wanted to test was my TouchPad which had an issue with snapshot. Awsome ! the TouchPad is working, it detects and working perfect ! OMA team fixed this, claps for you my friends.

My wifi is the notorious Realtek RTL8821CE, the Debian family and OpenSuse family and Fedora all of them haves issues with this Wifi Card and needed to install third party drivers to recognise it but just as what OMASnapshot done, this final version also picked my Wifi Realtek up properly. Mageia 8 done that same as well.

One good thing I notice from Mageia 8 to OMA4.2 in terms of Network Management is that : in Mageia, rfkill softlock is on when I booted up the machine, so in order to make my WIFI actually connects, I have to run rfkill unblock manually. But in OMA4.2, it handled on boot itself. Again claps for the OMA team

Another noticeable thing is that OMA uses the NetworkManager-qt by default but in Mageia they use the plasma-networkmanager which throws me some issues to configure and connect internet. These may be minor things but it actually adds a better user experience.

So I installed the OS to my HDD and booted. The installation process is butter smooth and super fast, however, I got a error widget says ‘Post Installation Script error’. It was just a simple window error screen, I closed it and rebooted my machine. Now, my system booted into the grub screen, I think there is a room for improvement to make a better GRUB Screen. Any how the booting time is good, nothing to complain, no errors and logged into KDE Plasma easily.

The system is pretty responsive. The default desktop without any further application running, takes around 900MB RAM. 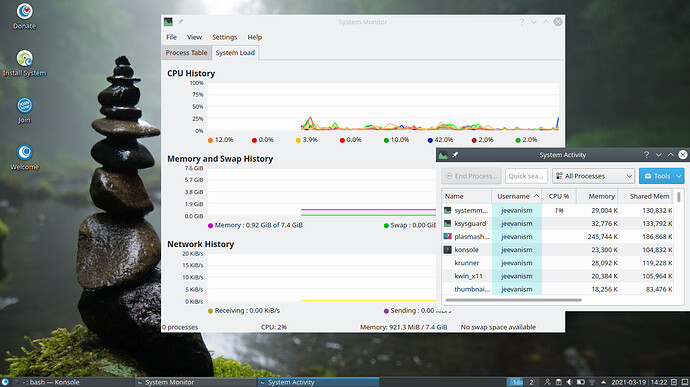 The issue I had with screen-brightness adjustment in 4.2Snapshot, still with this final version but after I added acpi_backlight=native parameter to grub, I can adjust my screen brightness with my keys.

So I am happy rather satisfied with 4.2 Final version, 3 of my issues got fixed with this version. Once again, best wishes to the OMA Team and thanks for the hardwork.

Thanks @jeevanism for the kind words and the report.

The default setting for screen brightness seems to be acpi_backlight=vendor. I do not know if there is any possibility of a perfect setting for this. What would work would be computer makers that actively pursue Linux support. But given the fractured nature of Linux distributions that is unlikely to happen.

Even computers from companies that specifically build computers for Linux will see problems with this when the users install Linux distros other than the distros that company is familiar with.

Companies that I know of that make laptop/notebook computers specifically for Linux are System76 in US and Tuxedo in Germany. Lenovo also is in the beginnings of some level of Linux support, but note that Lenovo is focused on *buntu. More from Lenovo about Linux support.

I would encourage users to prefer AMD CPU’s and to boycott nVidia as they do not play fair with Linux developers.

so you will be happy that znver3 is coming
https://www.phoronix.com/scan.php?page=news_item&px=GCC-11-Znver3-Round-3