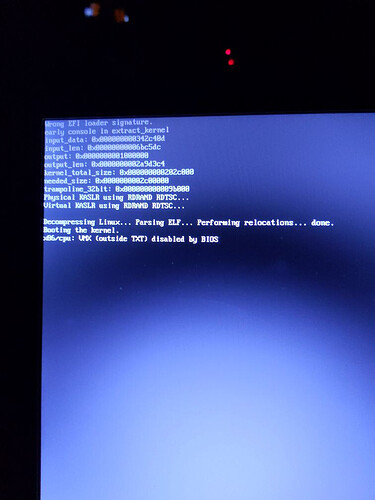 @zaivala is it a fresh install?
If so, and if you want Rolling I’d suggest to install one of the latest builds.
We are going to release OM Lx 4.3 so there may be too many differences to safely upgrade Rock published long time ago

and the most recent Rolling/Lx 4.3RC ISO build 347 have undergone the same testing and were also OK.

Did I Roll too far?

FYI: Do not use discover, do not use dragora, never. Or they will get into troubles for sure.

we have a great tool now available: DnfDrake.

If you prefer GUI, it is the only one I feel comfortable to suggest.
It has been recently added as a module to OM Welcome, this means that you need just one click to install it and enjoy 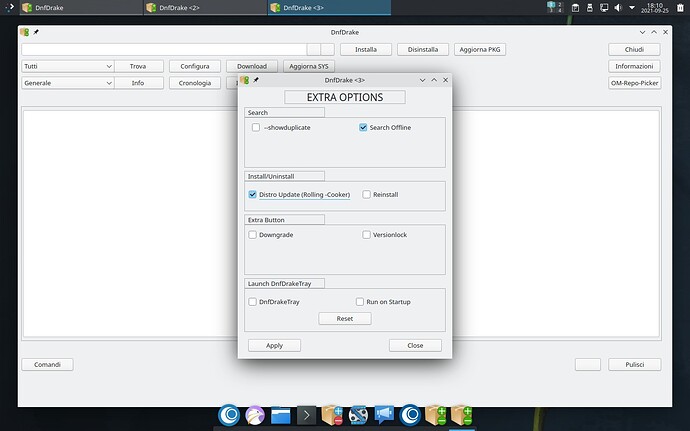 Is very late here. I’ll take a look tomorrow and see or ask developer for help if we need to.

May be around tomorrow some time after 14:00 CEST.

For this one I’ll need to think and possibly do some research before I post.

Followed instructions to convert to Rolling. Finished everything. Rebooted. Still 4.2. Read the forum to see that I might need to change my symlinks. Did that. System refused to reboot or do anything else. Did a cold reboot. Does not fully boot, although I get past the 4.2 splashscreen.

OK, first I need to be sure I understand the problem and what led to it.

You changed all enabled repositories to rolling from rock? You can check this with command in Konsole:

Every repo listed should have rolling in it’s name.

Then you would upgrade your system with dnf distro-sync command like this:

Note: The GUI package managers Discover and dnfdragora do not use the dnf distro-sync command they use dnf upgrade. That matters. For a system upgrade the upgrade command won’t do the job.

So am I right so far?

Of course I missed something.

Read the forum to see that I might need to change my symlinks. Did that. System refused to reboot or do anything else. Did a cold reboot. Does not fully boot, although I get past the 4.2 splashscreen.

You can not boot graphically. Can you do this. When you start up your system Go to the second line, hit Enter key, and select to boot in Console mode. I’ll post screenshots: 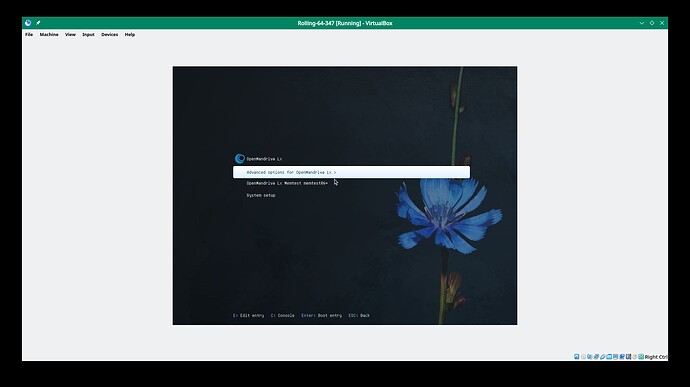 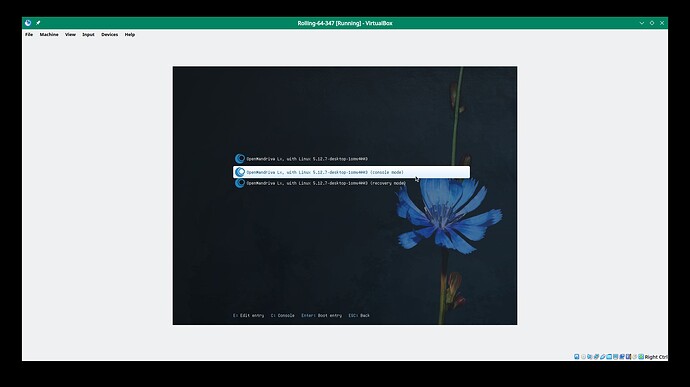 There you get a login prompt where you will enter your user name and password. If you can do this we can probably fix this.

Post-edit: Should you have problem logging in to Console mode try Recovery mode. There the prompt will say something like Press CTRL>D for something or enter root password. Skip the CTRL>D and just enter root password. You will be root but you can run the same commands. At this point we just want the information. We can fix things from either Console or Recovery mode.

In this screen shot I have booted a Rolling system in Console mode, logged in as user, and run the command to check which repos are enabled: 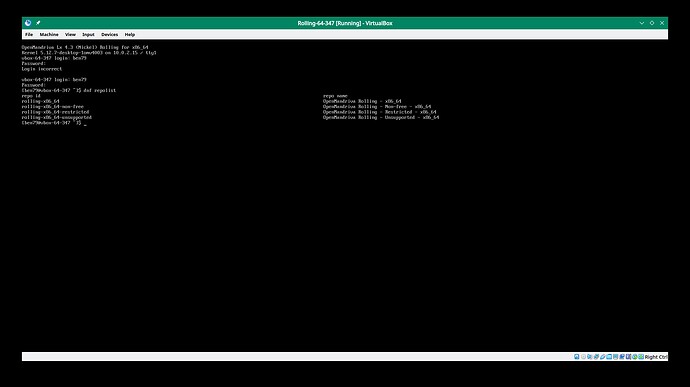 Note: Users do not need to have all of those enabled. You must have then main repository enabled, the one with id rolling-x86_64 and repo name OpenMandriva Rolling - x86_64.

To check the symlinks that needed to be changed for the Rolling distribution upgrade we run this command while still booted in to Console mode: 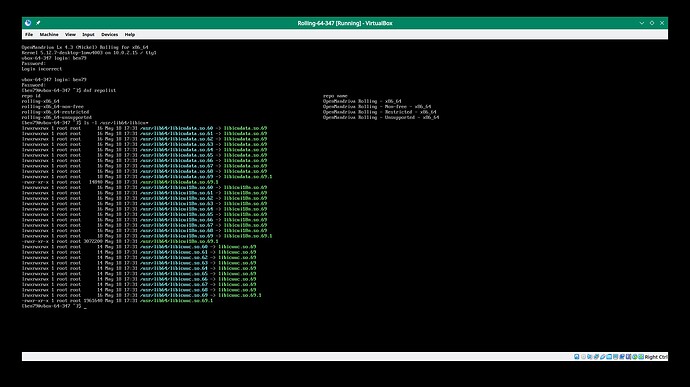 I hope this approach gets us some answers. The boot problem could be something incorrect with the symlinks or it could be some package confusion that happened with the upgrade that did not get you to Rolling.

Yes, it was a fresh install. Yes, I changed repo to Rolling… although as I reread the instructions, it said to change it to Release and then back to Rock… I also used Terminal and used dnf.

Let me get to some of the other responses.

Console mode stuck at the same place, and then moved on to where I have a login prompt. I logged in, and have a prompt:

I got into console mode, but my dnf repolist is not close. 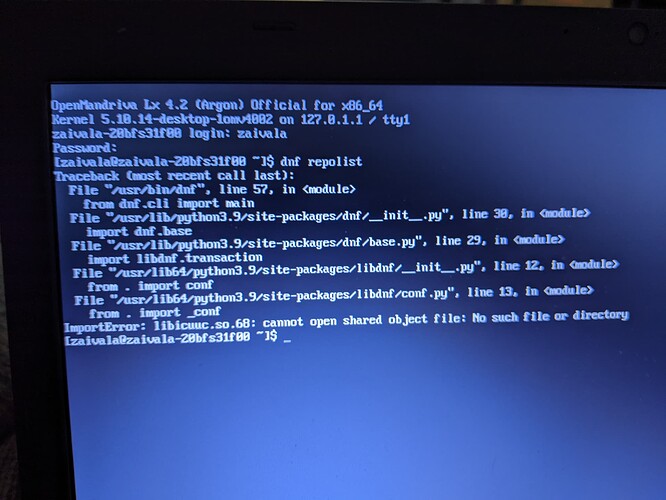 I think my best bet is to reinstall and try again.

we run this command while still booted in to Console mode:

See the line ImportError: libicuus.so.68 that is the next thing to fix. First we need to remove the old symlinks like this:

Next in console as you are run these 3 commands and reboot:

I tried to reinstall. Several times. I keep winding up with this: 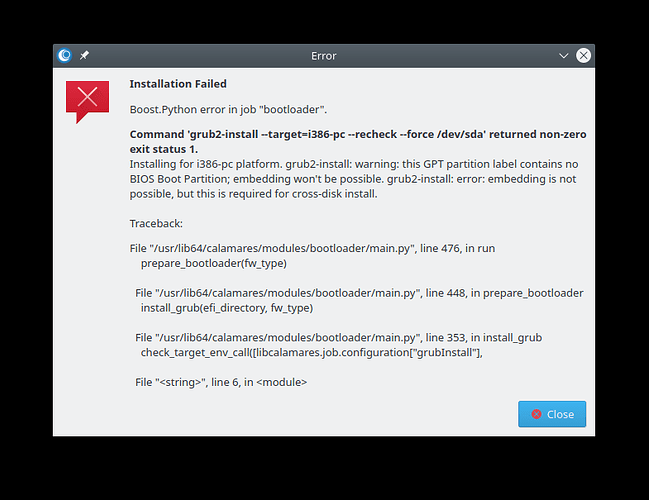 I still have the installation on sda1. I think I’ll just leave it Rock for now.

Please help if you can, and please come up with an easier way to convert to Rolling. I’m using OMA Lx 4.2… maybe 4.3 will be different…???

As far as feeling like an idiot or a fool, I have been in the same position to many times. I shudder when I remember all the dumb things I have done…

I fact I made a big mistake earlier in the post where I showed you how to add new symlinks for libicu* .so files. I forgot to include the first step of removing the existing symlinks. I will update that post now with the added step. Apologies.

Followed instructions to convert to Rolling. Finished everything. Rebooted. Still 4.2.

Convert to rolling means converting an existing OM Lx 4.2 system to Rolling from Konsole. A fresh install from an OM Lx Rolling iso is different. I thought we were trying to fix conversion attempt that went asunder. And it looked like we were close to fixing that. However if you can do a fresh installation that is preferred over a distribution upgrade always.

But to help I need to understand what you want to do.

This thread has instructions to do a distribution upgrade from OM Lx 4.2 to Rolling. It is a little complicated if user is not technically inclined.

If you want to do a fresh install of Rolling I recommend using this ISO.

I tried to reinstall. Several times. I keep winding up with this:

This error looks like a mistake in partitioning step. My best guess:

“contains no BIOS Boot Partition” might be that it wants user to select which partition is the existing /boot/efi partition. If user is using the older Legacy boot method there is no need for boot partition so it would not ask this in that case. This indicates a system that is EFI/UEFI boot so the /boot/efi partition has to either be selected or created.