Was out looking for a new AUR helper to replace yay and ran across news on you guys having a new rolling release with the Plasma desktop (openmandriva.rome-23.01-plasma.x86_64). I have been a big fan of Mandriva since the early days of Mandrake so I was ecstatic to see this. I have some questions since I have run Mandriva / OpenMandriva in a long while.

Thanks again for what looks to be a great release.

Hi @Locutus welcome,
thanks for your kind words.

I dislike discover and dnfdragora

Is the later GUI so I can see what updates are available before launching Konsole to update? 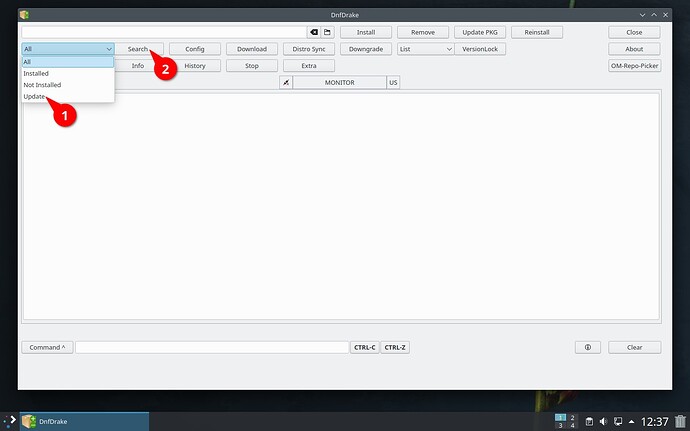 Still looking for answers to there two questions before I do a install.

Timeshift is packaged and (afaik) maintained.
I suppose that we did not receive enough feedback from users who well know it to confirm if it works fine as it should.
Testing (and any help) would be very appreciate though.

BTRFS works fine. I use it as my desktop machine from few months without any issue. BTRFS is used on root and home partition here.

Timeshift is available in repo in latest version 22.11.1 and should works fine with btrfs and rsync but i have to admit i haven’t tested it with btrfs yet.

Testing (and any help) would be very appreciate though.

Be more than happy to test and provide feedback.

I guess one last question till at least after the install. does grub-btrfs and timeshift-autosnap work? As for the version yes looks like it’s currently maintained, cause I just checked my version and it’s the same as yours.

Welcome @Locutus to the OpenMandriva forum.

OK first bit of feedback Installed using BTRFS. Had to do manual partitioning cause OM Rome wanted to use the boot partition on my nvme drive instead of creating one on the drive it was being installed to. Next after landing on the desktop and doing updates, tweaking the Plasma settings, and configuring Dolphin I was presented with not being able to add rootactions directly in Dolphin from the context menu section on top of a ton of items in the context menu section that should of been already been checked that were unchecked. Next I installed GParted without issue, but when I went to install Disk (gnome-disk-utility) I got a dependency error. One should never get a dependency error installing Disk. I’ll go back in later and attempt both Disk and rootactions again and post the error messages here.

In the meantime can someone please let me know which repositories I should enable? Thanks

In the meantime can someone please let me know which repositories I should enable? Thanks

Don’t know what other people should do. I do this: 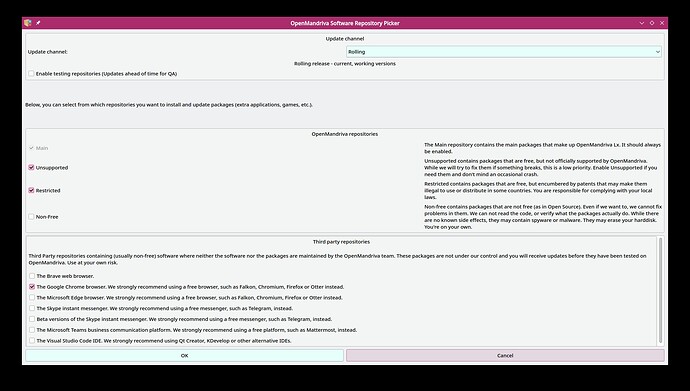 There is a brief description of each repository in that application. There is more about repositories in Release Plan and Repositories.

General user info: If you or any users believes there is a bug please report those here. You or any user may also talk directly to OpenMandriva developers and other contributors at OpenMandriva Chat.
There is information and tutorials in the English forum Resources section and in OM Wiki. As a Community distribution of Linux we depend on community members to help solve issues and make things better in OMLx.

Apologies, I heavily edited this post after first writing. 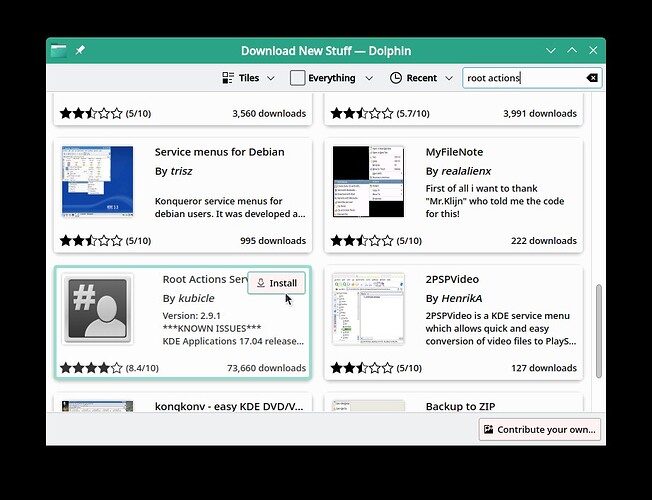 As I recall that has not worked for a long time. Bug report may be in order. Not sure where this problem would be but I suspect it would be with the software author kubicle or with KDE.

Here almost everything under context menu was checked by default: 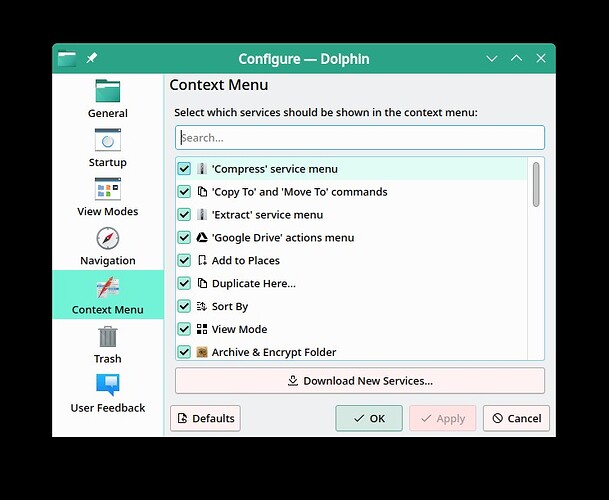 No sure what is wrong with that. There is also KDE Partition Manager which is installed on ROME Plasma systems.

I hope this was helpful.

Had to do manual partitioning cause OM Rome wanted to use the boot partition on my nvme drive instead of creating one on the drive it was being installed to.

Not sure I understand this one.

Is this with using Partitioning>Erase disk? Are you referring to EFI System Partition or /boot/efi? That is separate from the /boot directory that is part of the operating system, it is a complete separate partition with some kind of fat (fat32, fat16, vfat) file system.

EFI is designed with multi-booting in mind, normally there is no need for more than one /boot/efi. It is specifically designed to be used by multiple operating systems. FWIW On a 300 MB /boot/efi with 3 operating systems I show 99% of space free.

But I am not sure what our Calamares installer does with Erase disk if it recognizes an existing /boot/efi.
Or what it should do.

In the meantime can someone please let me know which repositories I should enable?

OK let me start with Rootactions. Looks like OM is one that adding rootactions from within Dolphin doesn’t work. That’s actually not a surprise since it depends on the OS(some it works fine, others you have to use their software search tool), that said it did install from DNF Dragon.

Now for the repos I added 3 that matched the closely the name of the one installed. When I go back into OM I’ll edit this and add their names.

Now for disk I did it after adding those repositories and this time it installed without issue.

As for the items not being checked under the context menu I will have to take a look since I did a reinstall using the other ISO. I’ll edit and post the name once back in OM.

Ben I’m referring to boot/efi. my second SDD I wiped, and chose erase disk and it wanted to use the whole drive for the BTRFS partition and just use the boot/efi partition on the main drive. I know it’s not really a issue, just use to when I go to install a OS on the second drive it normally wants to created both a boot/efi and BTRFS partitions. I prefer it just incase I decide to wipe the main drive or something should go wrong with the main drive then I don’t have to go in, partition, create a boot/efi, and then point grub to it. This way if the one drive for whatever reason isn’t available I can still boot into OM without any added effort.

Anymore questions or more clarification fom me just ask. Thanks for all the feed back.

let me start with Rootactions 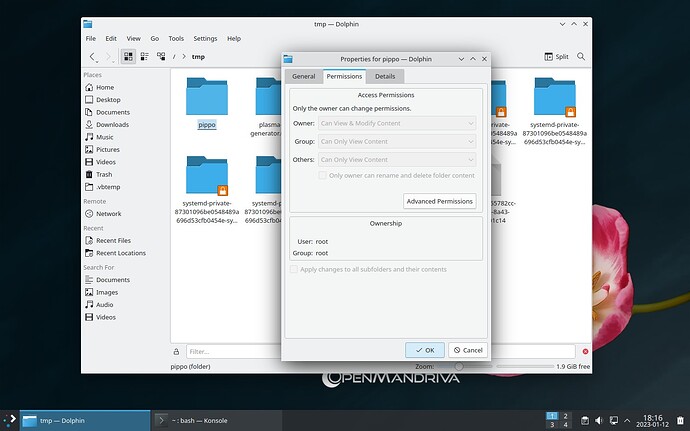 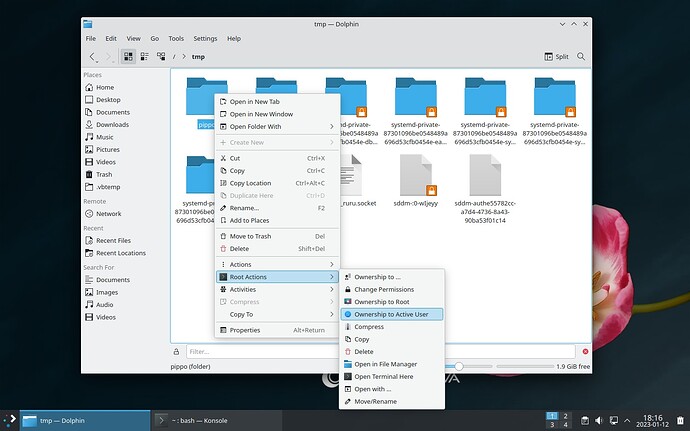 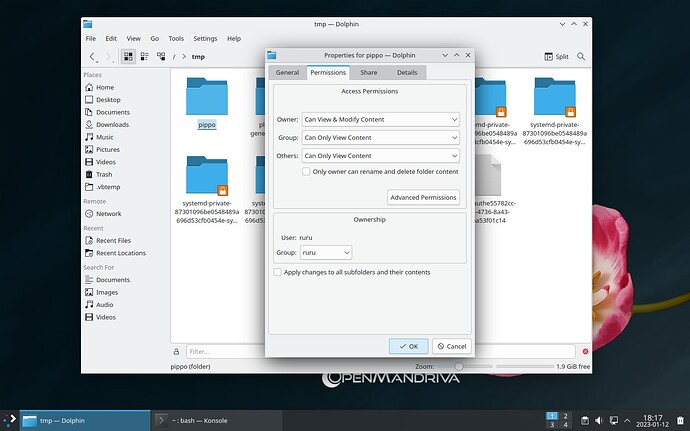 I did not find any problem, the servicemenu is immediately available, and it works as intended here.

Now for the repos I added 3 that matched the closely the name of the one installed. When I go back into OM I’ll edit this and add their names.

It is perhaps easier to open Konsole and run this command dnf repolist and post the output here as code. Example:

Another way is to use Spectacle to post a screen shot. Example: 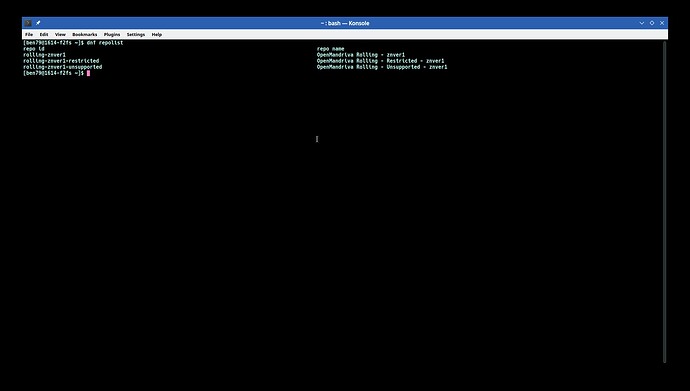 The most important point is that if you intend to have a ROME system all OpenMandriva repos have rolling in the name. Sometimes users want to add cooker repos which will cause problems or break things.

The 3 repos you listed from your output and one other are what I checked. I made sure they matched what I was running.

For the second time I’ve launched dnfdragon, file, repositories, and checked and applied rolling-znver1-non-free, rolling-znver1-restricted, rolling-znver1-unsupported on top of the rollingznver1 that was already checked. Even when I check dnfdragon and see that all 4 are checked the command keeps saying.

Finally figured out that I needed Software Repository Selectror

For the second time I’ve launched dnfdragon, file, repositories, and checked and applied

@Locutus you can’t find and will never read anywhere in official documentation to manage repositories from dnfdragora (or discover).
Never