What applications are missing in OM Lx 4?

I also asked developers “What software have Y’all removed from repositories”. Answer other than drakxtools nothing comes to mind. So developers are well baffled by the “lacking applications”, they don’t understand what people think is missing.

The dropping drakxtools has been announced and pretty well covered previously and over time we hope to develop new software or backport software from other sources to replace these. That is a WIP (Work in Progress) that will continues after OM Lx 4 is released. The reason for doing this is that it has gotten to difficult to develop with up to date Linux tool-chain packages and keep the ancient, decrepit code of drakxtools working. In retrospect we probably should have done this a few years ago. But then hindsight is 20/20.

So the situation with both drakxtools and URPM is not something missing it is something being replaced. Granted in the case of drakxtools that is going to take some time but that is unavoidable with our current resources.

And please be sure you have enabled all repositories before mentioning a missing application.

This is currently the command to enable all active repos in OM Lx4 Rock (4.0 currently):

To disable replace --enable with --disable. To enable or disable a specific repo, well you can figure that out can’t you?

Developers want to know specifically what applications are missing that our users or potential new users would like to see included in our repositories? So please if you think there is something missing let us know in this thread.

Dear users, please read also this and this.
You are welcome to write your suggestions here below.

Tempted to Close this thread> lack of interest among users. But note the title. We asked users what applications are missing from OM Lx 4 and got nothing here. We did get an occasional mention in other threads of individual package and these are mostly built and in use now. A few are to deprecated upsteam or to old and difficult code for us to try to maintain. But the ones we can do we have done.

There are still some projects on back burner we work on from time to tie like using TV as Monitor with Intel and nVidia hardware.

MySQL Workbench for me.

BlueGriffon seems to be the sequel of kompozer

Those are all unmaintained packages upstream. Our developers have looked at all 3 and given up on scan2pdf and kompozer as far as I know. Currently someone is looking at gftp but so far all build attempts have failed.

scan2pdf I’m less sure about. Skanlite and Simple Scan are listed on some websites as alternatives to scan2pdf.

Thanks Ben
not easy to readjust to new software …
:O(

not easy to readjust to new software …

Yes, and OM does not have a large developer group. Larger distros may have these packages working, I don’t know that for sure though.

I do know OM devs have put a lot of time and effort in to getting our tool-chain packages up to date.

@td22 there is a bit of good news for your requests. gftp is now available in all OM branches. Shown here in a OM Lx 4.0/Rock VBox system" 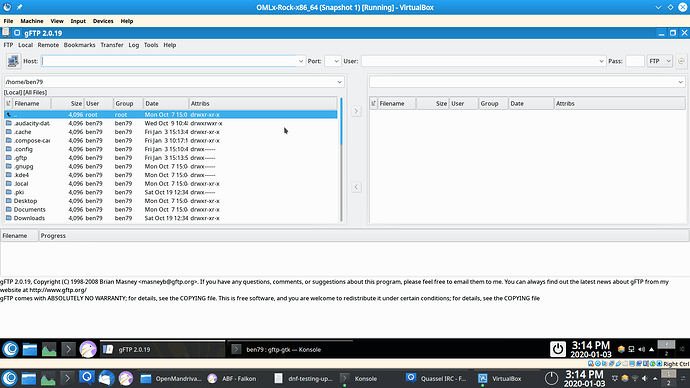 Post-edit (Jan. 06): gftp package is moved to unsupported/release repo in Lx 4.1 and unsupported/updates repo in Lx 4.0. We can supply specific installation instructions if anyone has need. In Lx 4.0 if you set your repos as described in post #2 above then this should just install normally from Konsole or dnfdragora.

there is a bit of good news for your requests. gftp is now available in all OM branches

I tried installing gftp and bluegriffon using dnfdragora but I couldn’t find them …
I just have some very basic notions for linux … do an installation from a DVD, and install software through dnfdragora I get there, but after …: o): o)
Thanks to all the developers for the work

I just have some very basic notions for linux … do an installation from a DVD, and install software through dnfdragora

Start with the right (IMO) approach: forget dnfdragora and use a terminal/console.
You will find that it’s the most easy way for someone suggesting ‘how to’ and the most easy for you to do.

To install in OM Lx 4.1 Alpha/Rolling: 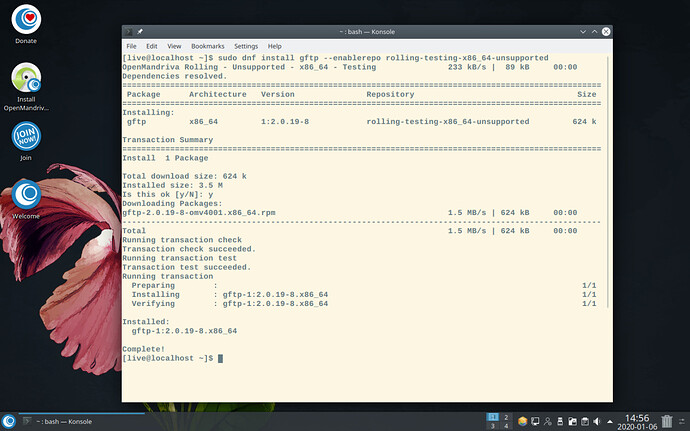 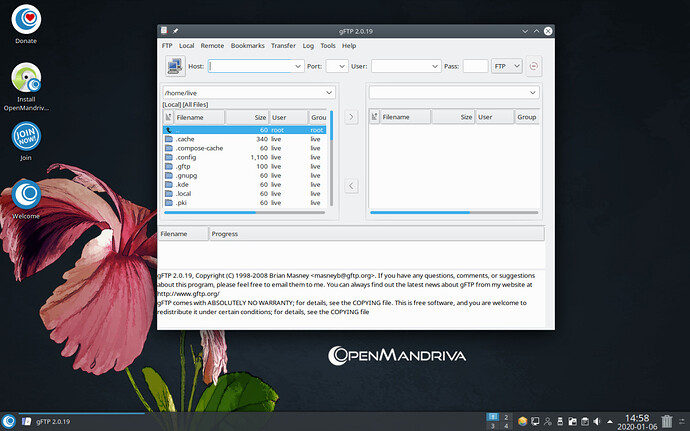 If you are in OM Lx 4.0 and you set repos as described in post #2 above you should have no problem finding either.

BlueGriffon installation is currently broken because of some dependency issue. @Colin is working on it.

do an installation from a DVD, and install software through dnfdragora I get there

If that’s all it took then Linux would be a lot easier to use than Windows or Apple.

Ok Ben …
It works, I found GFTP with dnfdragora …
I do not master Linux commands well … when I have a problem I am lost … I even reinstalled Openmandriva following a problem which I could not find a solution …: joy:: joy:: joy:
I have been using Openmandriva for 15/20 years