Can be those “categories colours” be standarized inside the site?

Another point of standarization can be to have the same categories in all languages. However, I understand this couldn’t be needed at all, as, except Italian, there are few messages in the languages different from English.

Every language part has its own sub-categories.
In the ideal world yes for concistency some of them, the basic/more important ones, are arranged with the same tree pattern.
As you well noticed, except the Italian category in the other forums there are very few messages, so we can handle all this in case of need.

A lot of the languages also don’t have the same categories. The language I moderate, Spanish, people wanted a “free chat” and a place to post the translations of articles about OpenMandriva, while other language groups are more focused on support, and others still, the development of OpenMandriva.

I agree with the idea to let the users decide, in each language category, which sub-categories they want/need.
But if there is the same sub-category (1) in different language it should have the same colour, at least for the first level.
Would you propose a pattern?

(1): of course, the same sub-category has not necessarily the same spelling in different languages. For example, support in English is aide in French. This is one reason for keeping the same pattern.

Support is one of the main cat for all languages

After, we have Announcements and Communications. I think this too may go under the tree pattern.

Anyway, again, please let’s not create empty categories. It would be very sad to see

Postedit:
A free chat category may be useful too in all languages.
For example in IT we have Pausa caffè (Coffee break).

A free chat category may be useful too in all languages.For example in IT we have Pausa caffè (Coffee break).

I suggest whenever a category is the same or very similar to a category in the English forum, we should use the same colour, otherwise pick one. To try and keep uniformity between all the languages’ colours would be a linguistical and logistical nightmare.

Do you like “Coffee break” as free chat category name?
Or do you want to keep something more serious?

“Coffee break”, why not?
Maybe “Pizza hunting” would not be agreed

Maybe “Pizza hunting” would not be agreed

@jclvanier Will you take care of free chat category in French forum?

Not only colour uniformity, but also language colours are “related” with a representative flag, except for Spanish !

Not only colour uniformity, but also language colours are “related” with a representative flag, except for Spanish !

Here I am going to bother again…

If I open the discourse home page I can see only the language categories. 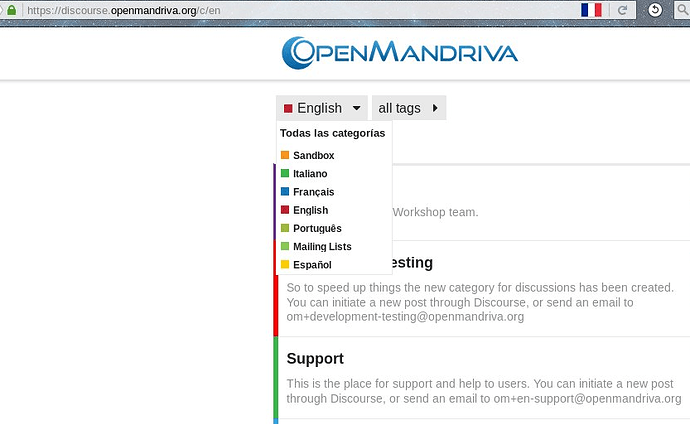 Keeping this thread related to the colours, I can see that “Mailing lists” also has green !! (which already belongs to Italian and Portuguese). So I think we can select a new colour to “Mailing” that probably don’t appear in flags too much, like purple or pink or brown.

PS: Now, “Sandbox” colour is similar to (new) Spanish, but I can distinguish them. I don’t see the need of change here. But remember orange is a colour associated to the Netherlands and Ireland. If Dutch is a language that appear in the future we can have the necessity of change “Sandbox”. You’ll see if this is a problem or not (it’s not, IMHO).

Addendum:
Forget something.
Italian “Desktop art” (title in English) and English “Development Testing” are too similar to the red-orange “Resources”, which is a standard category.

That’s the “colors nightmare”…
Now support, free chat and announcements have the same colors in all languages. Which makes sense and was easy to achieve.

Why not black for MLs and white for sandbox?
I like white sand …