Hello, I’m using OMLx4.2 in VMware, and I’m trying to upgrade to latest kernel using source code from kernel.org (the latest kernel is 5.18.9 currently), but whenever I try to upgrade by installing updates, it says that I do not have enough disk space or "Disk Requirements: At least xxMB more space needed on the /filesystem. I tried using this guide How to Upgrade the Linux Kernel on CentOS 7 | PhoenixNAP KB but I’m stuck at Step2 update OS part due to insufficient storage. I tried increasing the disk size up to 100 GB but the same problem persists.

I tried skipping the upgrade part but it requires glibc although i had upgraded glibc using sudo dnf check-update glibc command.

May I know is there any solution to this problem, or is there any other way to upgrade the kernel using source code ? Thanks in advance.

Welcome to OpenMandriva and this forum @Alectrona.

I do not know enough to adequately answer your question but will try to say what I do know.

OpenMandriva contributors are a very small group of part-time, unpaid, volunteers. One major goal is to promote opensource solutions for OM Lx users.

As far as I know versions of OM Lx newer than 4.2 do not boot in VMware. I looked in to this a bit but got nowhere.

OpenMandriva has kernel-5.18.9 in our development branch called Cooker. This version will likely also move to our Rolling branch very soon.

This next part is not a recommendation:

I have been able to install Cooker kernels in current Rock (OM Lx 4.3). This is a “Do at your own risk”, “If there are problems do some problem solving yourself before reporting” type of project.

You can find latest cooker kernels is our ABF.

There is more information in OM wiki.

@Alectrona this command should install the kernel:

A word about repos. Do not mix repos form one branch of OM Lx with another. Example: If you add Cooker repos to a Rolling or Rock system you will break your system. Using the --enablerepo option like in the command above is safe if you want to try something. In the case of installing kernel the existing kernels are not removed so if what you try does not work just reboot to kernel that does work. Unless you want to problem solve then dnf rm the package that did not work.

Thank you for replying! Unfortunately, I tried using
$ sudo dnf in kernel-desktop --refresh --enablerepo cooker-x86_64
command but it seems like there is “No such file or directory” error 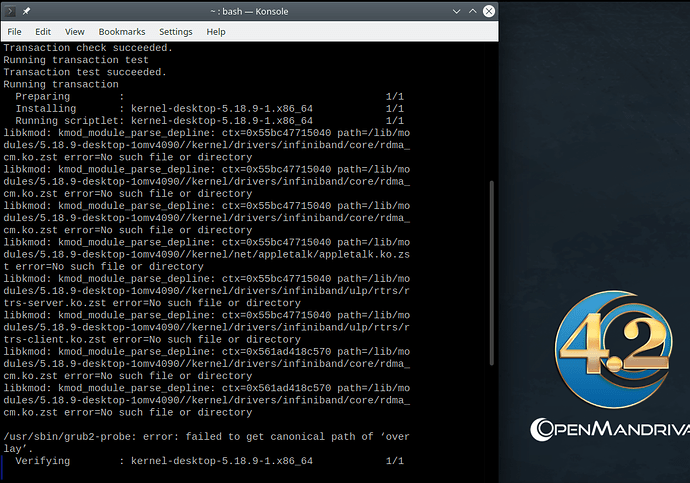 and the kernel is not updated even after reboot. Does that mean there is no other way to upgrade kernel in VMware, instead I have to try installing Lx 4.3 instead? I tried both vmware and virtualbox but both do not work for Lx 4.3. Sorry if I’m asking very basic questions, I’m very new to OM and learning about Linux.

I tried both vmware and virtualbox but both do not work for Lx 4.3.

The issue with VMware not booting Lx 4.3 is known and discussed here.

People in the contributor group use VirtualBox for testing thus we know Lx 4.3 and other versions of OM Lx do work in VirtualBox. We would need more details about your situation to problem solve anything.

The screen-shot shows that on OM Lx 4.3 host machine I have OM Lx Cooker, Rolling, and 4.3 VM’s. I use them all every week for testing various things. On the right you can see settings for one VM so you can see what works here. 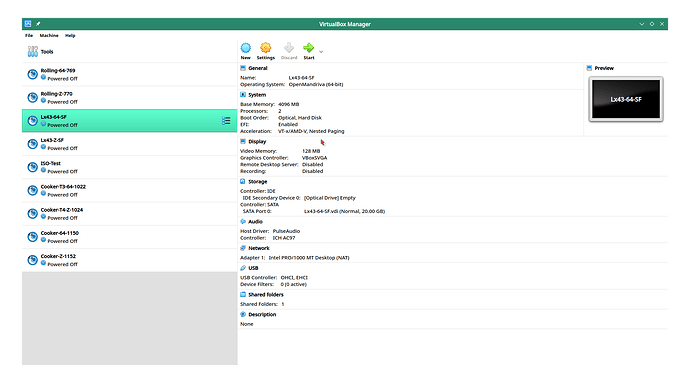 You will need at least 2 GB memory and 8 GB disk space for OM Lx in VirtualBox. I would recommend 15 GB of disc space if you can do that. Also things to look at are Graphics Controller where VBoxSVGA works here but other folks report using other settings for that. Also look at settings under Paravirtualization Interface, sometimes different settings work for some people. The Graphic Controller is more likely to be a problem than Paravirtualization Interface so I would play with Graphic Controller first. 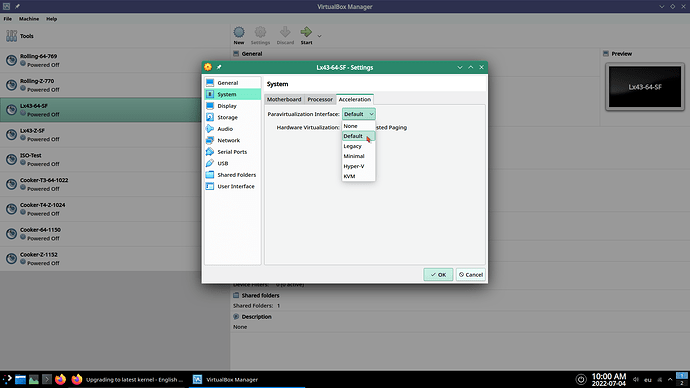