Here is how oma-welcome is currently.
We need a few fixes to get it updated to OMLx4.0 new major release and in the mean time we may want to change some of the suggested displayed apps. 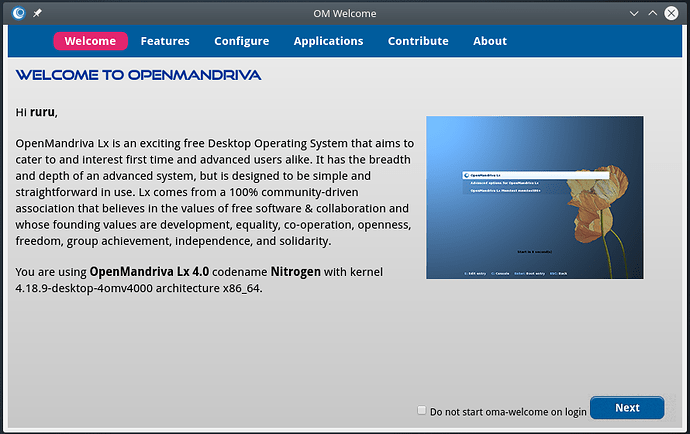 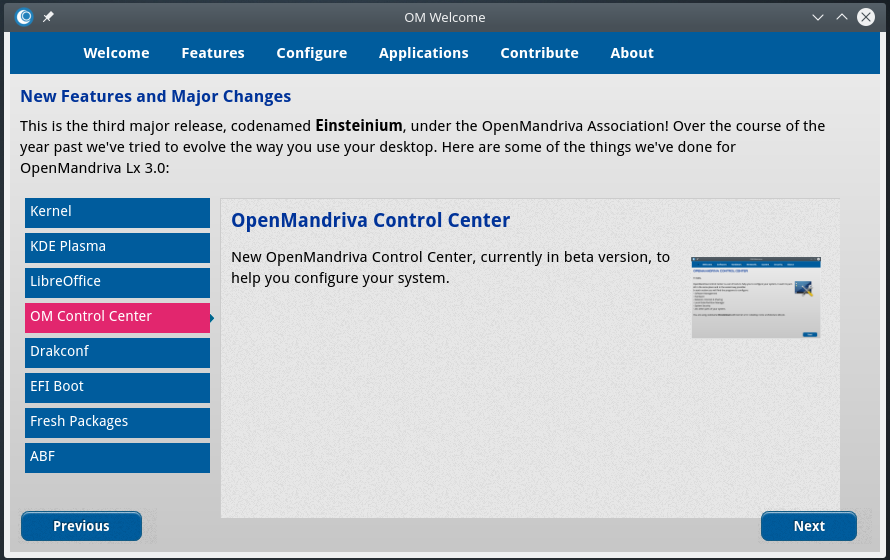 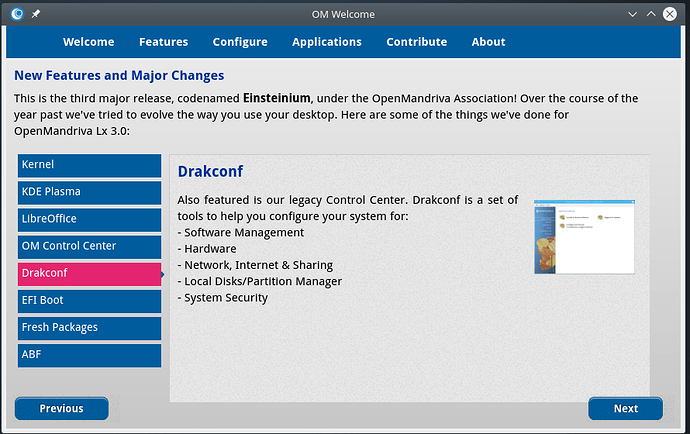 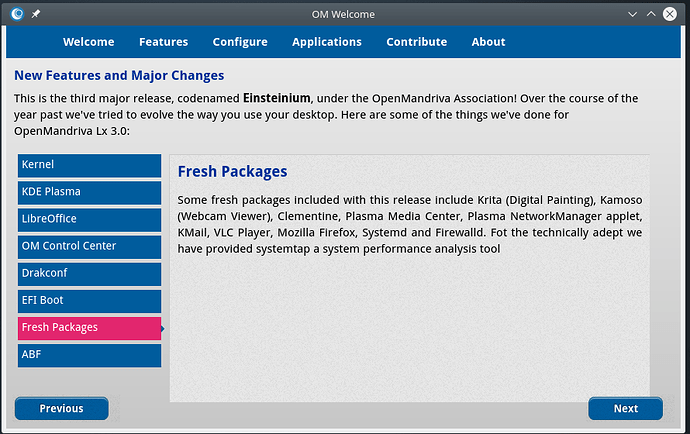 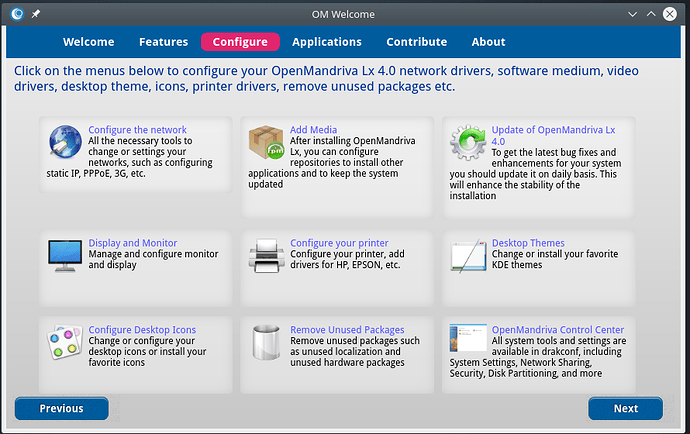 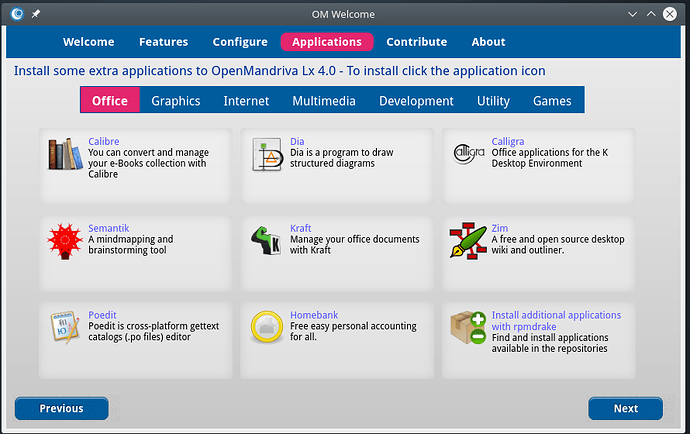 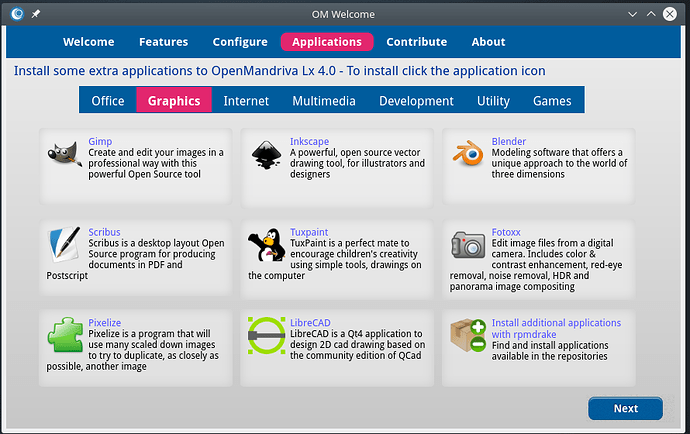 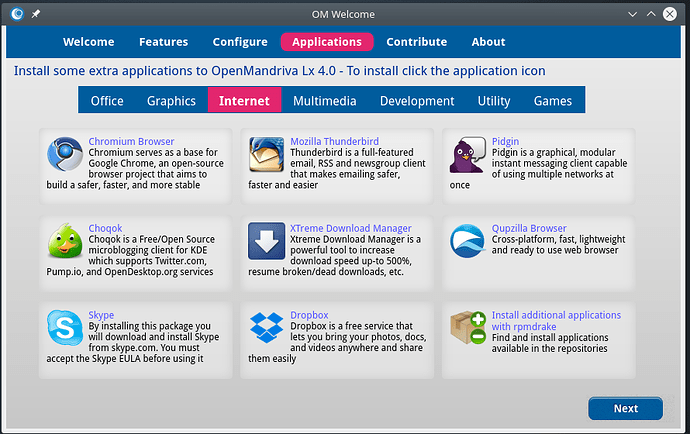 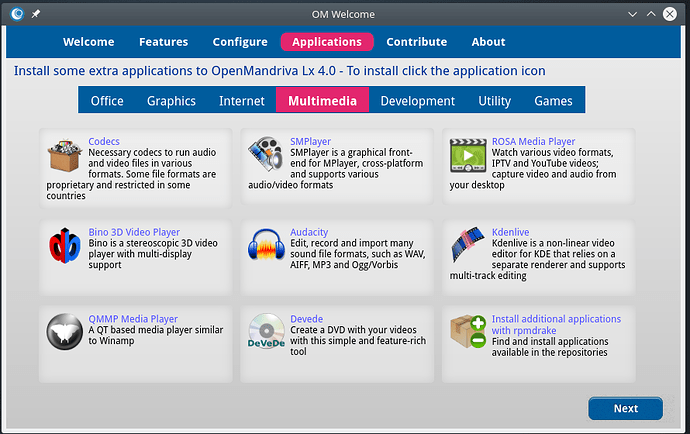 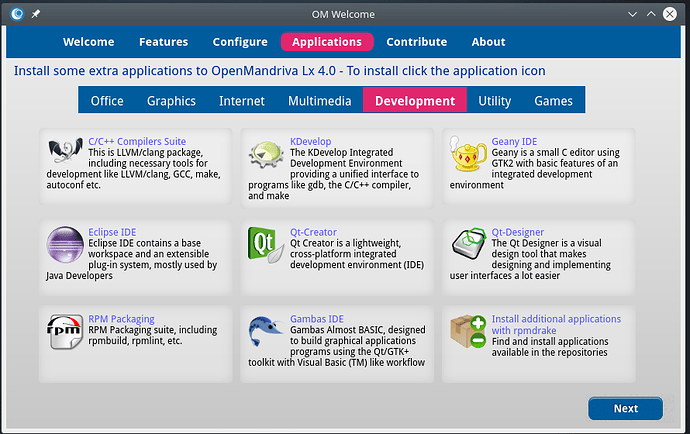 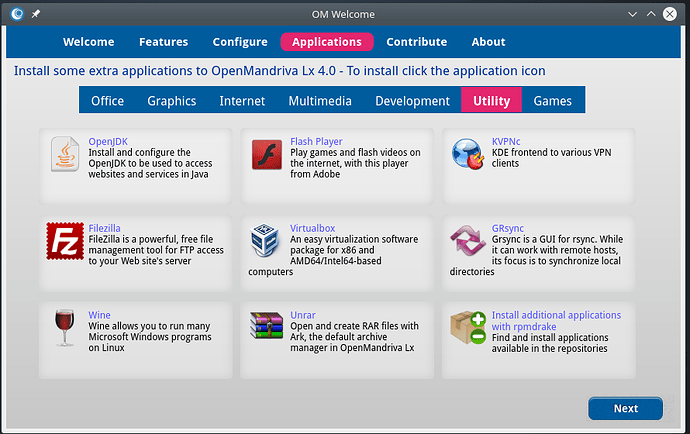 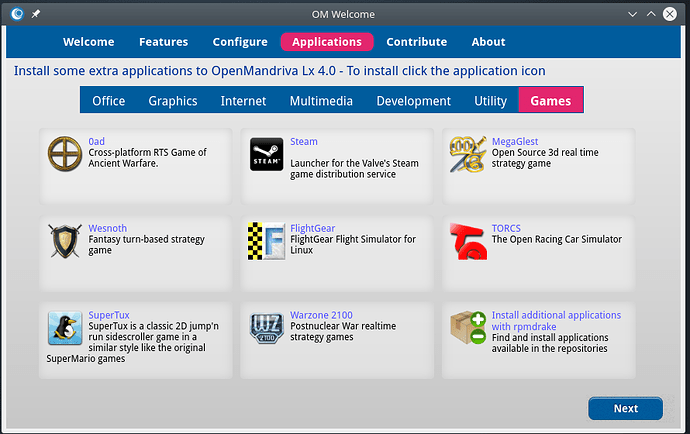 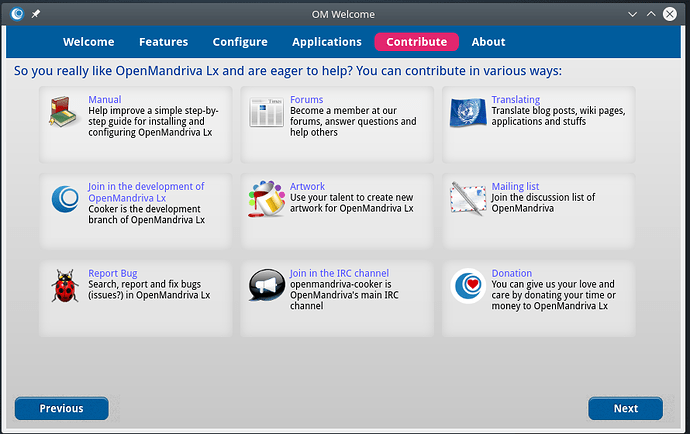 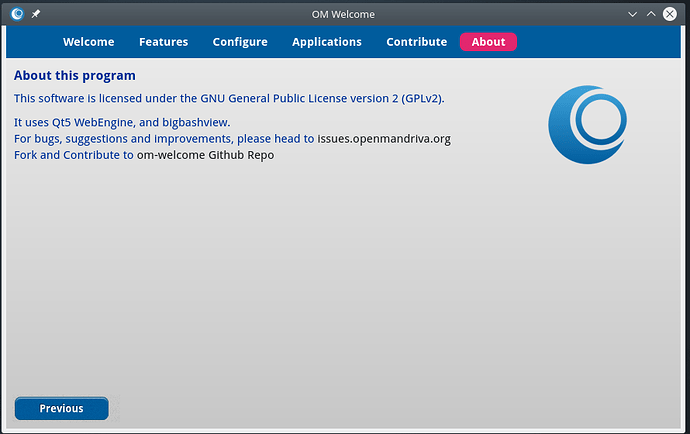 - OpenMandriva Control Center
What to do with it?

- Drakconf
Guess is to be deleted

- To check if informations are correct, in particular
It uses Qt5 WebEngine, and bigbashview 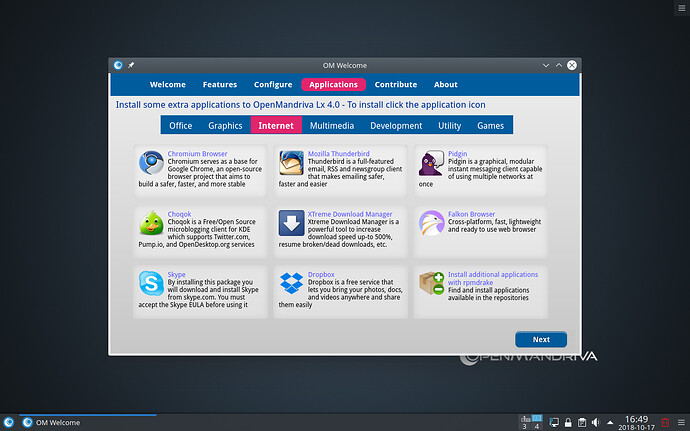 This is wikefied so everyone can edit.

Just need to be sure is accurate and up to date.

drakconf references need to be removed and replaced with manatools.

I would remove references to ABF, most users won’t know or care what that is all about

don’t know if panel about EFI boot is still needed?

OpenMandriva Control Center to link to updates OM-CC by @bero

that’s as far as I have gotten

These will need all the links to install updated

Also maybe what packages are listed needs updating as well?

We could use some user input on what applications should be includes don’t you think?

Something, need to check further

just check and be sure is accurate and up to date 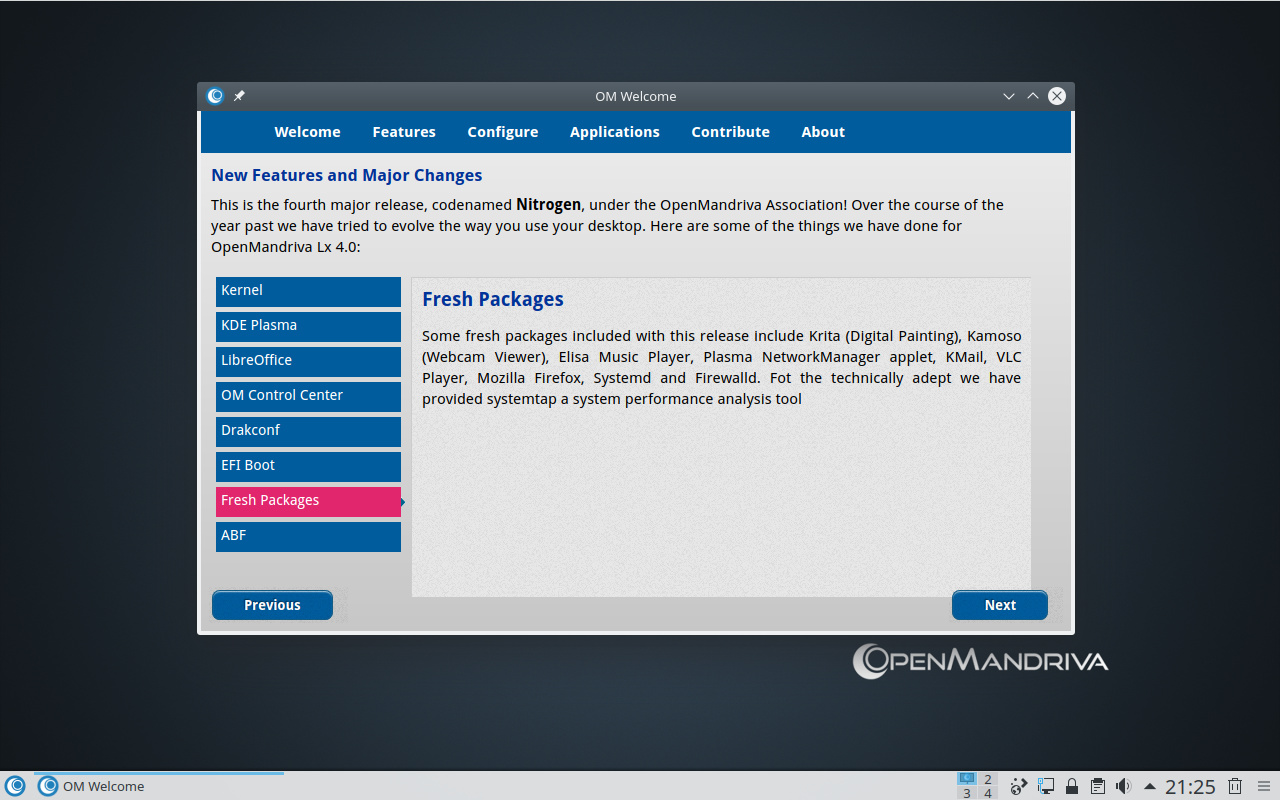 What the heck is a systemtap? And where is it, I haven’t found in application menu yet?

And there is a fot that should be a for.

What the heck is a systemtap? And where is it, I haven’t found in application menu yet?

If we can’t find it in application launcher I would suggest it not be there.

What the heck is a systemtap?

So is this meant to be a replacement for omv-bug-report.log? Or an additional tool?

it should be in Application Launcher

I have the feeling that it works in CLI (aka command line interface, for windows-ish ppl

SystemTap provides a simple command line interface and scripting language for
writing instrumentation for a live running kernel. We are publishing samples,
as well as enlarging the internal “tapset” script library to aid reuse and
abstraction. We also plan to support probing userspace applications. We are
investigating interfacing Systemtap with similar tools such as Frysk,
Oprofile and LTT.

I think that we could (or should) replace get-skype with skype (online). 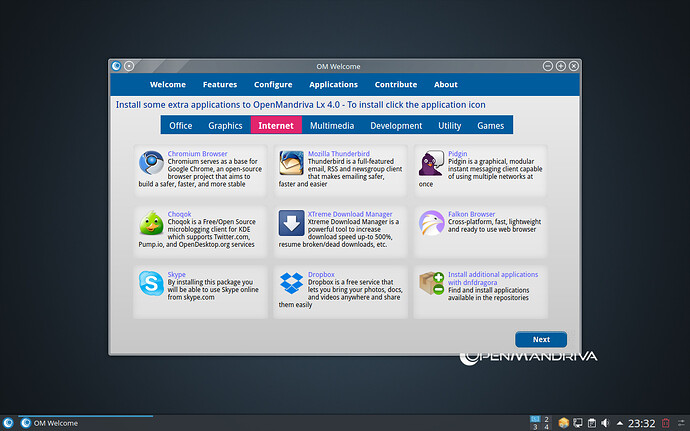 Also, not sure how to edit this sentence properly:

“software medium”, “video drivers” and “remove unused packages” should go away I guess. 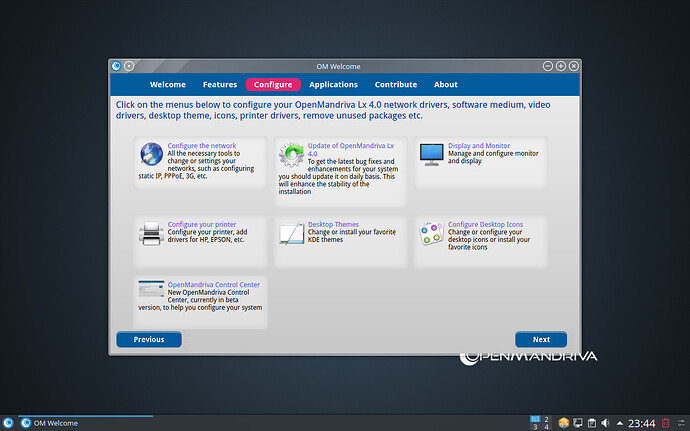 I think that we could (or should) replace get-skype with skype (online).

Or we can add both. get-skype still should work fine and still is in development for linux.

Choqok still works in Cooker but I agree. It should be removed from this list. Last update was long time ago and I dont think that many people want to use (mostly) Twitter app. If anyone want, always can install it via dnf install choqok.
Proof of working choqok: Imgur: The magic of the Internet

BTW. If I can, I would suggest removing:

Xtreme Download Manager - is outdated but stillinstallable but broken. You can’t launch it. So remove it or someone should update/fix it.

Choqok still works in Cooker but I agree. It should be removed from this list. 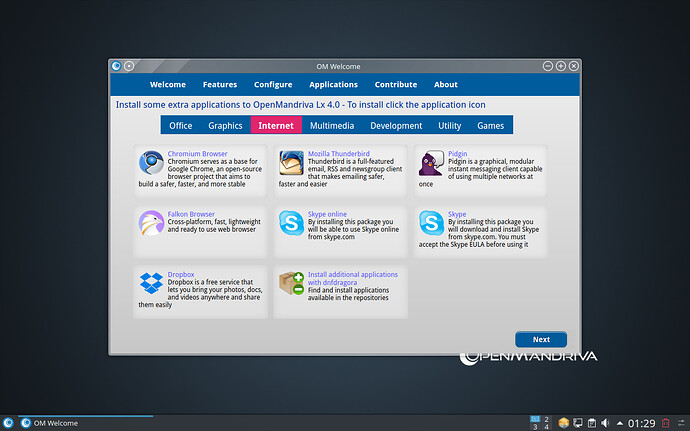 Now we have one free place available to fill

Also, not sure how to edit this sentence properly:

Maybe “Click on the menus below to update your system, configure network, printer, desktop theme, icons or OpenMandriva Control Center for more.” 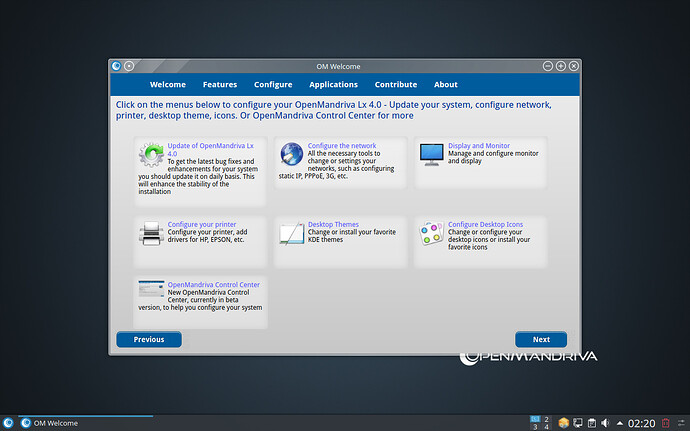 I am pretty satisfied so far.
Waiting for @bero, or another willing fellow, to commit the changes.

Hi,
I just got to Moscow and still have some stuff to prepare, probably won’t get around to it before I’m back (Tuesday night). Would be great if someone stepped in before.