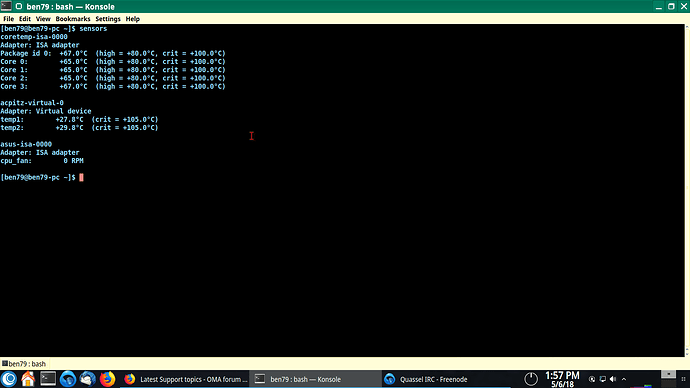 I forgot to ask my questions.

Below is screenshot of what I was used to on OM Lx 3 and still see on openSUSE and Manjaro partitions. 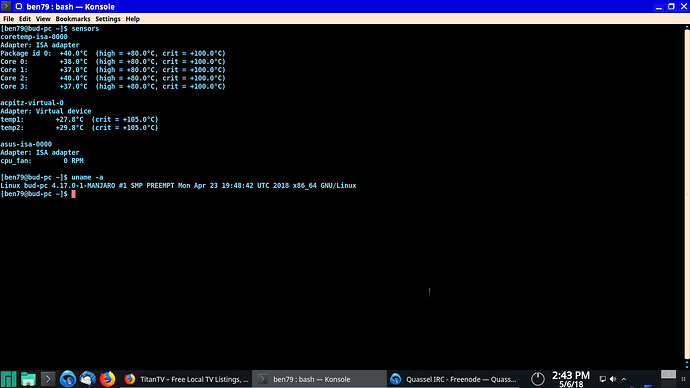 I have tried with different 4.15.x kernel versions and that does not seem to be the issue unless issue predates kernel 4.15.x. I doubt this or I would have seen the problem sooner.

One obvious question would be if there are any runaway processes using a lot of CPU or 100% of a core or something like that. No these readings are observed with CPU usages in 1-5% range.

Edit: Also no excess memory usage or network or anything else I’ve thought to check so far.

I’m running at 32.2 c with a lot of graphics , that’s pretty normal …then again I’m in the basement where it’s cool .

Thanks for the input @jimmyc. If you are using Lx 3 and fully (or close enough to it) updated and running at 32 C then my problem may partly be related to hardware like a Haswell processor (Intel i5 4590). But it can’t be totally hardware or my system would not run cooler in Manjaro or openSUSE partitions. Or so I’m thinking.

I think this is a partly hardware issue related to Intel CPU’s and maybe only some Intel CPU’s. Like mine.

Progress on this. With the help of Gabriel Craciunescu on IRC (#openmandriva-cooker) we found that the way OM Lx 3 is configured cpupower was not working. To check your own:

and if it isn’t running try:

This corrected my elevated CPU temps at idle or with desktop just sitting around.

Postedit: Note: This issue has been with me for at least 6 weeks. I’m by no means and expert with Tuned but I did play (a lot) with Tuned settings and nothing in that regard ever had any affect on my CPU temps. It is not like I did not try anything else before coming to this conclusion for this issue.

Thanks @jimmyc and @mandian for you input. Thanks Gabriel Craciunescu for getting me to this point with this issue. Now I can “hang out” in OpenMandriva Lx 3 again instead of my openSUSE or Manjaro partitions.

Here you may find some useful info about CPU frequency scaling also referred to Intel processors. I remember for some kind of processors the only usable choice was to use performances governator, but this highly depends on the specific processors are you using.

I wonder if this isn’t related to the last cpupower update:

It seems like both cpupower and tuned may be broken or not quite configured correctly:

That’s a good catch by the way @jclvanier!

OK, I’ve checked my own logs in freshly installed system with no testing packages (only packages from release and updates repos). System is fully updated. There have been no changes or customizations to system package. No changes to cpupower or tuned. And I have that exact output as well. It occurs as the system is shutting down so I don’t believe this indicates that tuned isn’t working. As far as I know tuned is working on my system.

Some of the relevant packages:

This show tuned working on the system mentioned in my last post:

Also tuned has it’s own logs in ‘/var/log/tuned/tuned.log’.

The only thing I see amiss with the package in updates repo is the command:

does not work. It is supposed to work, I think it is anyway. I wish it did.

Maybe this from ‘/var/log/tuned/tuned.log’ has something to do with my elevated CPU temps with desktop at rest:

Post edit: And remember that my initial problem is CPU temps but it has been demonstrated that the likely cause is that the CPU frequency stays at or near max all the time. As shown by ‘cpupower frequency-info’ in this line: