New version of xscreensaver for Lx 4.1

OpenMandriva does not recommend using Xscreensaver due to security concerns. We do make this available and users may use but any security problems are the users responsibility.

Few people complaing about this: 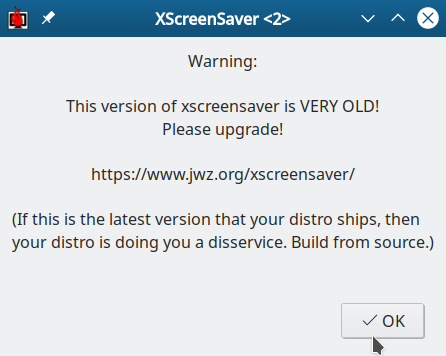 I tested the xscreensaver package in Rolling and it seems as if this error message has been removed. Also the version in Rolling is newer 5.44 vs. 5.42 in Lx 4.1 so I built the package for Lx 4.1. As always with new packages it goes to testing repo first and then after testing will to to main/release repository.

Very Important Note: xscreensaver is no longer a part of OM Lx default installations as it is considered to much of a security risk. We do continue to make this available for users. Users with old CRT’s may actually need this to avoid “burn in” on their monitor. Anyone still using a CRT that does not have any burn in, congratulations, that is some sort of achievement. Users use this software at your own risk. *

To install the new xscreensaver package:

If you already have xscreensaver installed:

We can update xscreensaver to 5.45 and this warning should gone.

If we can update it that would be great. I thought the warning was gone with v. 5.44, but I could be wrong.

xscreensaver 5.45 built for Rolling/Lx 4.2 and Lx 4.1 and published to respective testing repos. To install for:

If you already have xscreensaver installed you will need to replace the install with upgrade in the command string.