Edit: The Release Notes include a link to this.

You may want to look at minimum system requirements also. For Plasma desktop you need 2 GB ram.

Hi! Thank you for your reply. I shall look for the notes you pointed out. There is 4MB RAM on the notebook. Hopefully that is enough for the Plasma desktop. Good!

Welcome @petramus to the OpenMandriva forum.

Thank you! I have earlier used Mandrake Linux over 10 years ago. OpenMandriva looks like an interesting linux OS distribution. I am at the moment using Endeavouros linux.

I burned the ROME iso (Build ID 1613) to DVD with k3b. Booted it and am posting from ROME ‘Live’ running off that DVD. Works. Calamares installer starts. It does take what seems like a long time to boot but DVD’s are a lot slower than a USB flash drive. Wifi works. 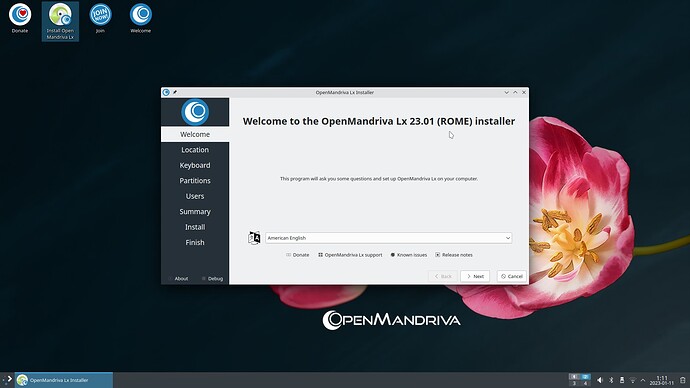 Edit: Did some tests. On my desktop ROME iso boots from DVD in about 5-6 minutes. I can imagine this may take longer on some hardware. Tested both Legacy boot and UEFi and time was about the same for either.

Hi! I am obliged for your fast reply. I burned the OpenMandriva Rome 64 bit OS using K3B programme to a DVD+R disk. First the media DVD disk was not recognized, but I got the EndeavourOS recognize the DVD disk. However, it is now same kind of problem as 9 months ago when I first installed Manjaro and after that EndeavourOS to my notebook on SSD.

Change of boot order from a SSD to DVD did not work. Finally I got EndeavourOS Live distribution to work. Before EndeavourOS I tried Manjaro Live. The booting of such an Arch operation system was a slow process. Perhaps it is now same kind of problem than in last spring. I shall try to install a second one SSD to my notebook.