How to use ABF to build rpm's

I don’t see openmandriva2014.0 branch on my personal repo. You have it.

have you this configuration here 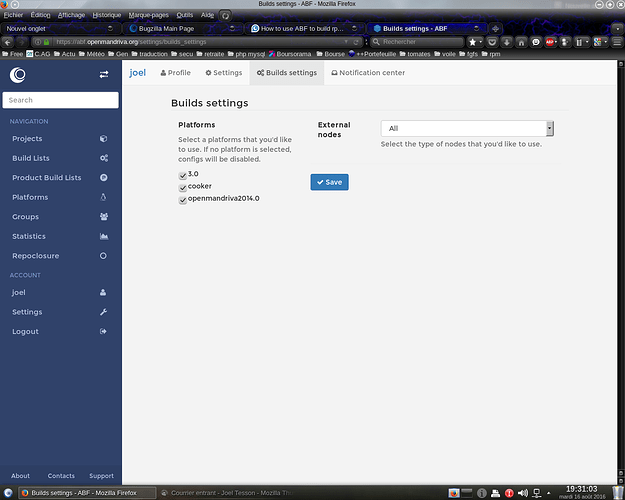 @luca No, I haven’t. It is mandatory?

@jojodu34 yes I have the same configuration.

Here is an example of the error. I also tried with a customized live of openmandriva 2014.0 and I got the same error so I think it isn’t an abf issue but a rpmbuild.

No, I haven’t. It is mandatory?

Here is an example of the error. I also tried with a customized live of openmandriva 2014.0 and I got the same error so I think it isn’t an abf issue but a rpmbuild.

seems bad address or bad name something like that

In any way putting that link in the browser works. The link with the full name doesn’t work.

Usually github uses a link containing only the version number but when you click on it using a browser it saves an archive with the name and the version. This doesn’t happened with wget, of course. But the archive in the OpenMandriva file-store contains the full name so I use the full name in the file .abf.yml and the real link in the spec. I don’t know if it is the right way.

I already tried this but is doesn’t solve. I also tried with another package using a direct link to the file (i.e. without redirections) but I got a similar error.

It fails even with branches

It fails even with branches

So I must pay more attention to the name of the archive before to load in file-store, at least for 2014.x.

I was following the tutorial but I had this problem where the site http://file-store.openmandriva.org does not show the option to search for the file

as you can see in this screenshot

as you can see in this screenshot

Add files does not work?
Nor drag&drop?

I have also similar question, like how can I get the sha 1 file. with out the file will it be possible to move forward, that I want to build in https://penmypaper.com/. Looking for the answer, and thanks in advance.