Hi, my system failed in black screen suddenly during i was browsing on internet, then after i rebooted it can’t load the login screen. When i try to boot in recovery mode and run the ‘‘systemctl default’’ i get the screen on the first picture on the second pic is the last lines of log file. Please help me to recovery my system 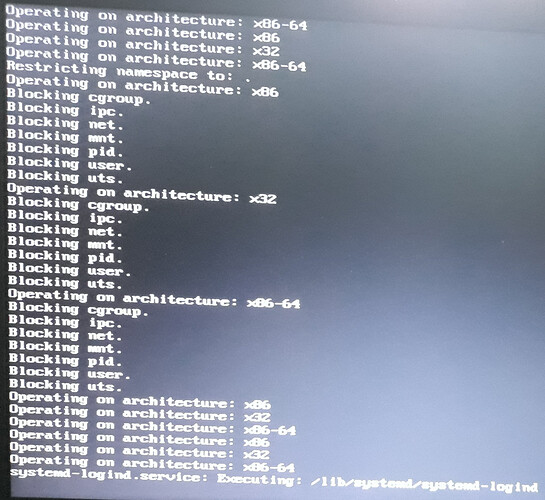 Do you know how to run a command and post that as a file here? For a boot problem like this you would do this with dmesg and journalclt -b.

This will create a file:

Explanation: This > is called “redirect” and you are simply redirecting the output of a command to a file. (You can name the file whatever you want.)

Where the file stored? may i set it?

It is stored in the directory where you run the command. After running the command just run:

and you will see the file.

Aw thank you it’s so simple, am going to doing it and i will return to post the outputs.

Before going any further what had you most recently done to you system before the crash happened. For instance did you upgrade packages? Anything else?

Also let’s check what version of sddm you have. Post output of this command:

No any change on my system at last days it was very weird, i got the black screen as i scroll down a page on firefox…

This is the problem:

First you probably should disable testing repositories. (That package came from main/testing it never made it to main/updates for a reason.)

And then run this command:

For all users of OM Lx 4.1 the correct version on sddm is:

Ok thank you, some questions now… i guess i must disable the testing repositories via command line how can i do that?
second question, i remember when i update my system on lx4.1 the default update app was the dnfdragora now is the apper may i return back to dnfdragora as the default updater?

i guess i must disable the testing repositories via command line how can i do that?

No there is “Software Repository Selector” in Application Launcher>System. 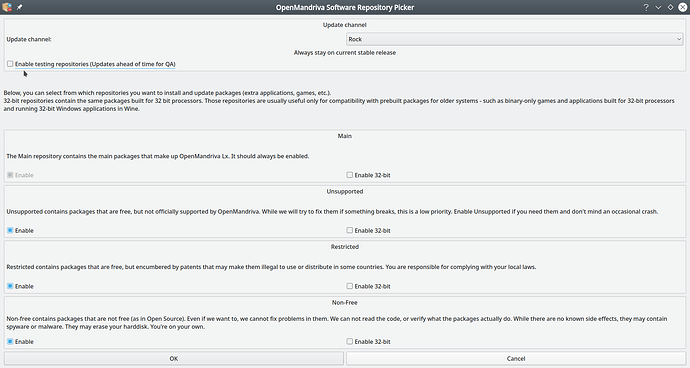 dnfdragora was default updater for OM Lx 4.0 for OM Lx 4.1 we switched to Discover. apper is not part of a default install. We provide a GUI for this for users convenience but it is not really more convenient. Users of GUI PM’s tend to not pay attention to what they are doing. Not paying attention to what you are doing when you are upgrading your system is just plain dumb.

I do not recommend using either dnfdragora or Discover to upgrade any operating system. Instead for stable versions of OpenMandriva Lx open Konsole and run this command string:

you don’t even have to type the command every time. If you have used command recently just use up arrow key and find the command you want and press enter.

For users of Cooker or Rolling branches the recommended upgrade command is:

Sorry i was wrong said apper but i mean Discover… i also don’t meant upgrade OM of 4 to 4.1 when i upgraded my system to 4.1 i did it on a clean installation using a live usb system, i mean the usual software and system updates , the $ sudo dnf clean all && sudo dnf upgrade referred on those?

i also don’t meant upgrade OM of 4 to 4.1 when i upgraded my system to 4.1 i did it on a clean installation using a live usb system, i mean the usual software and system updates , the $ sudo dnf clean all && sudo dnf upgrade referred on those?

Yes I mean the usual software and system updates.

FWIW if user can manage it a fresh install is always preferred to trying to upgrade form one operating system version to another. The upgrade from OM Lx 4.0 to 4.1 was not exactly straight forward and is described in detail here for users information.

Also it is worth stating that some of what I’m talking about is related to OpenMandriva being all part time, volunteer organization as opposed to Mandriva which had a company with paid employees behind it. Also OM is a much smaller developer group than Mandriva had. So reality of limited resources is that we can’t do nearly as much to make things as user friendly or especially newbie friendly as we would like to. We are trying though. And it seems that bit by bit we are getting better at this.

Ben, am so happy! i am writing now using my favorite distro, thank you very much!

Thanks for the kind words! And I’m happy that we got you problem sorted.

You guys doing great job and the less we can is to thank you!