The problem with this being broken is that we do have users that use OMLx in VirtualBox and we have in the past stated publicly that we support this. Latest chromium-browser-stable-102.0.5005.115-1 in Cooker/main and Rolling/main/testing repos seems to be broken in VirtualBox. This is the Konsole output from Cooker VirtualBox VM:

Cooker and Rolling/testing users should know what to do in this situation.

The Konsole output looks horrible whether chromium-browser-stable is working or not working. For sake of curiosity here is Konsole output from Cooker hw system:

Edit: Changed title and first post to reflect this issue is specific to VirtualBox.

Problem in VirtualBox persists with chromium-browser-stable-103.0.5060.53-1. Konsole output looks about the same:

Edit: I do not necessarily assume this is a problem with chromium-browser-stable package, it could be something else. Am using OM virtualbox-6.1.32-1 in Rock/4.3. I have not filed a bug report because I would like to see a new working version of VBox in Cooker first in case that is the problem.

I filed a bug report on this issue.

@AngryPenguin showed me a workaround for this issue.

That should open the browser. Then in open browser go to Settings>System and disable hardware acceleration. Now browser should open normally in VirtualBox. 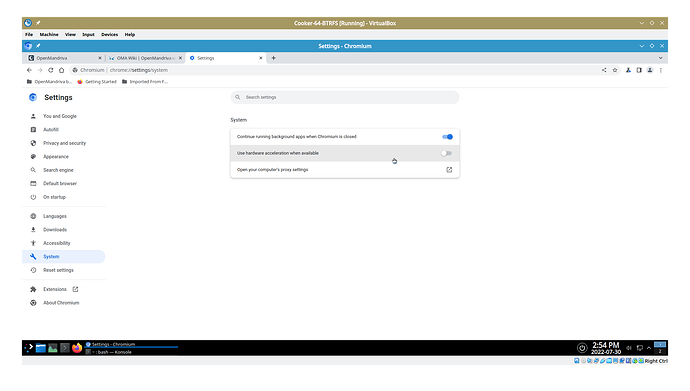 An example, trying to go to https://chrome.google.conm/webstore will cause it to crash.

I tried something that became necessary during my early Fedora (version 21) days, to prevent Mozilla-derived software (Firefox, Thunderbird, SeaMonkey) from crashing all the time and that was to disable GLX by placing a .conf file in /etc/X11/xorg.conf.d and rebooting.

After doing the same in one of the other OpenMandriva VirtualBoxes, logged in with Plasma/X11 and also Wayland, Chromium - with hardware acceleration disabled, continued to crash upon going to the same Chrome Web Store link. Once relaunched (as long as it stayed away from that link!), it was fine for a little while, then began to display “Aw, Snap!” pages referencing SIGILL.

Same version also crashes in Cooker inside a VirtualBox, without displaying browser UI.

Disabling GLX as above, did not have any affect.

That link should perhaps be Chrome Web Store.

I know Google Chrome sync does not work in Chromium anymore, hasn’t for a while. Not sure but I seem to remember this is being due to some change Google made in their code for Chrome that they don’t share with Chromium.

Would not have thought that would affect access to Chrome Web Store but I can confirm that here Chromium 105 in ROME VBox system does crash using Chrome Web Store. That url does work in Falkon and FF in the same ROME VBox system. That indicates the problem might be with Chromium not VBox. But I wish we could narrow it down to whether this is a Chromium or OM’s Chromium issue.

I checked this in Rock VBox system and Chrome Web Store crashes there also.

Does Google Chrome itself, crash in VirtualBox? I don’t have that repo enabled.