is someone using the Realtek 8821ce wlan card and can tell me if it is properly recognized by OM 4.1 or do i have to to a workaround to get it working ?

No, sadly Realtek does not provide one for Linux.

You can try to use this one Contribute to tomaspinho/rtl8821ce development by creating an account on GitHub.

but to be honest I have no idea how well it works.

if it is properly recognized by OM 4.1 or do i have to to a workaround to get it working ?

Thanks for report. Looks like @bero add support for this driver in kernel-clang in cooker. So should be supported now. See this commit:

But to be sure that everythings works fine, we need make some tests. You can help us in this by installing cooker and trying last clang kernel 5.5.7-2 or manually download this kernel (if you not use Cooker) Build list - Project openmandriva/kernel-release-clang - ABF

Note: The following is for testing only.

@Krischan To test this in OM Lx 4.1 x86_64 you can install the latest ‘kernel-release-clang’ from Cooker repositories. In Konsole like this:

Then you need to reboot in to the new kernel. When you do reboot it will not boot to this kernel automatically so in grub2-menu you navigate to ‘Advanced Options’ and find this in the list: 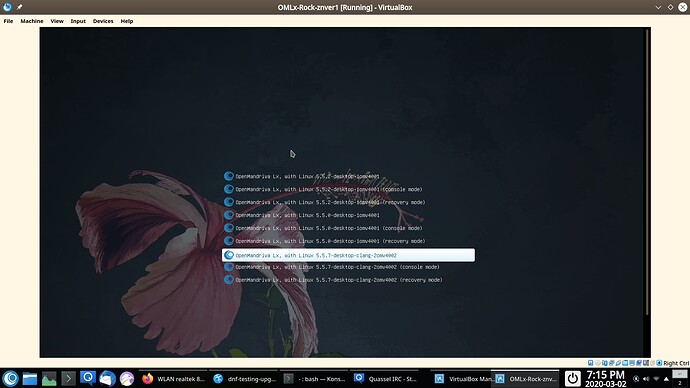 Select enter and boot in to the new kernel and see if wifi driver for realtek 8821ce is working. And most importantly let us know one way or the other if this works.

Note-2: I have tested this in Lx 4.1 system and it works for me. If you do not experience any problems with using this kernel there is nothing wrong with continuing to use it until we get new Lx 4.1 kernels built with this support. This will not remove any existing kernel so if there is any problem what so ever you can reboot in to kernel version you are used to using. You can remove this Cooker kernel with this:

Thank you very much ben79, i will give it a try the next days.
Right now i am testing Mageia, there the Realtek card is supported out of the box and the card is detected immediately after boot
Does OM have cooker isos ? I`d like to make a fresh install directly with cooker

Does OM have cooker isos ? I`d like to make a fresh install directly with cooker

Yes. That would be better for testing. We will probably be building new Cooker ISO’s today or tomorrow and I’ll post a link when they are built and checked.

sounds good
take your time, i`m not in a hurry

oh…btw. my Laptop has a Ryzen 5 3500 CPU so i assume the znver version is the better for me, right?

Yes, you would likely notice a performance difference if you are a gamer, video editor, heavy compiler, scientific/mathematical user, or other power user. From Release Notes:

We have also built a version specifically for current AMD processors (Ryzen, ThreadRipper, EPYC) that outperforms the generic (x86_64) version by taking advantage of new features in those processors.

znver1 is for the listed processors (Ryzen, ThreadRipper, EPYC) only, do not install on any other hardware.

Updated 2020-06-20 Note: Both ISO’s worked on hardware, znver1 works in VBox. To install x86_64 in VBox I had to keep restarting sddm.service until desktop worked. x86_64 installed system in VBox requires downgrade of virtualbox-guest-additions to version 6.1.6. YMMV. See bug reports in next post. The most recent Cooker ISO’s are: Cooker ISO x86_64 3304 Cooker ISO znver1 3303 Cooker is OpenMandriva development platform. As such it is where developers do some of their work. This work can an…

OK, thanks die the Info
I’ll have IT a try