What is command to revert from packages in testing repos?

Should be --downgrade, I think?

Yes, but not by itself. How do you get urpmi to recognize the installed from testing repo packages that need to be downgraded?

FWIW: This was in Kahinah on this page (or home page) at one time but it’s gone now:

and I foolishly did not seem to copy and paste it anywhere. Can’t believe I didn’t do that.

IIRC I think you have to remove the repo, then do urpmi --downgrade – and
it should automatically pull in the packages that need to be downgraded
(don’t quote me on that - I forget lol)

Are you talking about this: 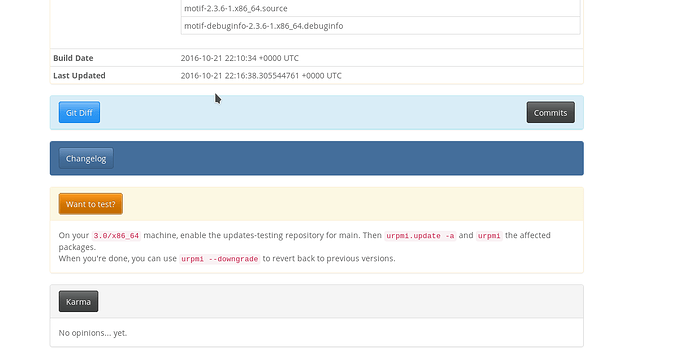 No. Run ‘urpmi --downgrade’ and what do you get? Same thing as if you
run ‘urpmi --help’. There has to be something that tells urpmi what
packages to downgrade. It would depend on how you have labeled your
testing repos. It is something like this but as you can see what I have
is wrong:

Try it yourself with how you have labeled your testing repos substituted
for ‘main-testing’.

For me testing repos are disabled and I’m not testing packages until I
have the command to revert to stable packages.

I there’s going to be a bash script needed top do this. --downgrade only seems to do something (not sure what yet) if you supply it with a package name.
First then we need to get the full package name of everything in testing…You can do that with
urpmq --list --media main_testing -r
Then you can use xargs or parallel to feed urpmi --downgrade something like this.
I’ve distilled the whole thing down to a single command line as it’s easier for me to pass the list of files to parallel as a variable. The --dry-run flag to parallel just shows what would be done.
It’s possible that the user has not installed all the packages in testing because obviously some programs may not be installed so they can’t be updated.
To get around this you’ll note that parallel has a programmable failure threshold which means it will only halt when the number of failures reaches the number specified on the command line.
In addition a log is written to the users home directory.
Here is the full command:-
DG_LIST=urpmq --list --media main_testing -r; printf ‘%s\n’ “$DG_LIST” | parallel --dry-run -q --keep-order --joblog $HOME/downgrade.log --tty --halt now,fail=10 -P 1 --verbose /usr/sbin/urpmi --downgrade

This may not be foolproof I will run some testes in a VM. If downgrade doesn’t work then there are other ways to achieve the same result.
Comments and suggestions please.

or a script like this (to be tested and no guarantee):

I guess I’m giving up on this.

Also currently I’m not going to test packages as I don’t have the time to deal with breakage manually.