Spell check not working in LibreOffice (2014)?

In 2014 in LibreOffice Writer my spell check isn’t working. Or maybe I don’t have something set correctly? Oddly it is working in OM Lx 3. Anyone else seeing this? Any ideas how to get it to work?

after in menu >Tools > spelling and check automatic spell 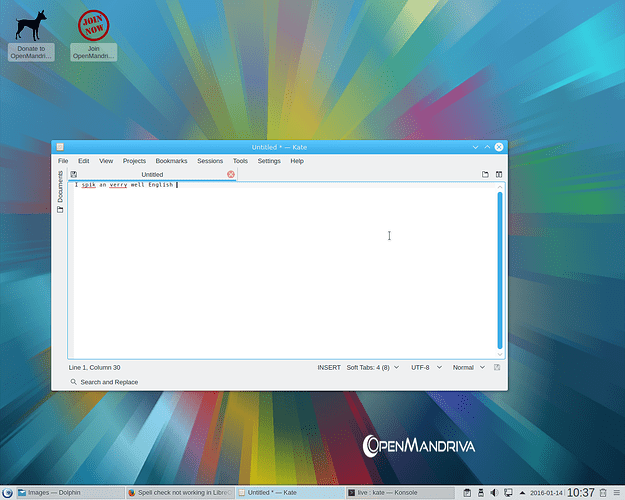 To get the squiggly underlines in kate or kwrite (2014.2), I had to install the aspell package corresponding to my language et set “automatic spell checking” in systemconfig/locale/spell checker.

Thanks, I had the aspell packages but had to install the myspell EN_US package. That got red squiggly underlines back in KDE apps in 2014. Unfortunately that doesn’t work in OM Lx 3.

IMPORTANT: Thanks to the red squiggly underline I now know that squiggly is a real word with a proper spelling in US English!

Thanks, that stuff is all set in Kate, Kwrite, and SystemSettings. And as such no F7 and shift>F7 don’t work in the sense that there are no red squiggly underlines.