Installed Windows 10. Grub removed.
How do I recover GRUB after installing Windows?

If you boot a live OpenMandriva system you can use the terminal way in the article to fix grub.

@pujithadimuthu This is current to the best of my ability:

In that Ubuntu doc the “Graphical way” and “Ubuntu Alternate CD” probably will not work in OM Lx. The section on “The terminal way” has elements needed but I think is not quite accurate for OM Lx.

OpenMandriva needs better documentation on this. And we will have that some day, but I won’t promise any time frame since everyone involved with OM Lx is an unpaid volunteer and we all have other work/family/life commitments.

However with this article you should be able to figure out how to do this on a Windows/OM Lx multi-boot system. I suggest using the Rescatux CD if it will boot for you as that can re-install grub2 automatically. If Rescatux does not boot you should be able to use Super Grub2Disk to boot in to your system and re-install grub2 with these commands. The first command creates the grub2 menu:

Then this command installs grub2 to BIOS mbr or EFI Firmware:

I do know that in normal circumstances, (meaning nothing was erased from /boot/efi partition that should not have been), then if user can use Super Grub2Disk to boot in to the system user wants to boot from the above commands do work to do that. (This has been tested.)

Also the above commands should include your Windows system in the grub2 menu.

There is a wiki article for this now here.

in normal circumstances, (meaning nothing was erased from /boot/efi partition that should not have been), then i

What will happen if I type

What will happen if I type

I have BIOS. I tried grub2-install /dev/sda in Mageia 5 (Correction) Command not found.

I tried to add Grub Parameters But some I do not know. Mageia 5 has MCC
If I boot OMV 4 from Mageia 5 then I can execute grub2-install /dev/sda.

Well it looks like you got your problem corrected.

I tried grub2-install /dev/sda in Mageia 5 (Correction) Command not found.

Mageia may not use exactly the same command. Some distros use grub-install instead of grub2-install. Any instructions I give are tested only in OpenMandriva Lx so may/may not be correct in other distros.

I tried to add Grub Parameters But some I do not know.

If you mean on OM Lx options for grub2-install use --help and man. Like this:

Or were you meaning kernel boot parameters?

kernel boot parameters? yes. Need to add to the grub.

kernel boot parameters? yes. Need to add to the grub.

For OpenMandriva Lx. This adds changes to all graphical and “console mode” boot entries but will not change “recovery mode” entries. To add kernel boot parameters on permanent basis you add them to the file /etc/default/grub to the line that begins GRUB_CMDLINE_LINUX_DEFAULT=. That is highlighted in this screen shot: 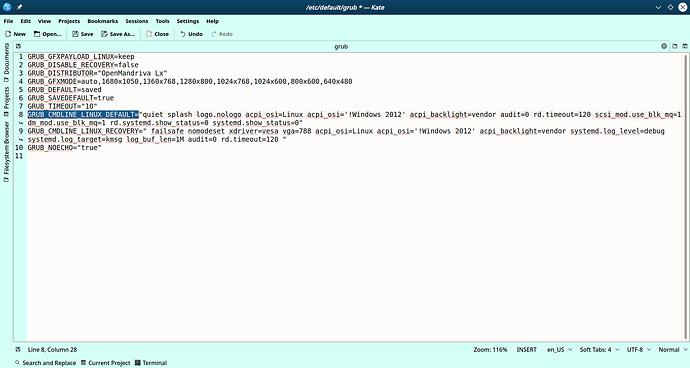 So to that file I’ll add radeon.si_support=0 amdgpu.si_support=1 which for me forces OM Lx to use amdgpu driver for my video card (gpu) instead of radeon driver. 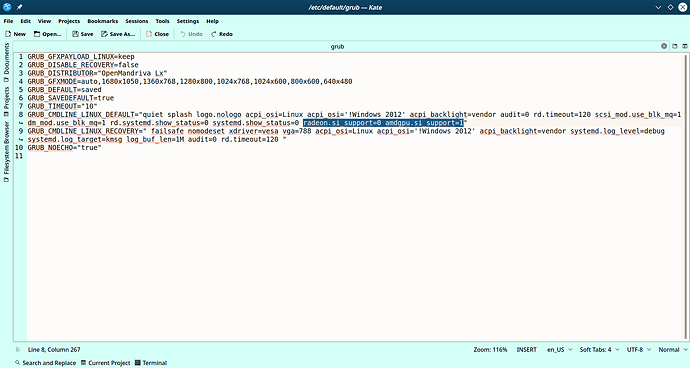 to update grub2 menu (/boot/grub2/grub.cfg) and reboot. Hope that is information you were looking for. For lists of kernel boot parameters you can find that with internet search.

So if you want to check if changes were/were not made you look at the file /boot/grub2/grub.cfg before and after doing the steps above. The changes will be in a section called:

To what we call the “linux” line.

For OpenMandriva Lx the command is:

Then this command installs grub2 to BIOS mbr or EFI Firmware:

I use this command normally several times every week in testing things. (In all versions of OM Lx too.)