Plasma Wayland provides full-screen resolution in VirtualBox but not X11

In VirtualBox, a Plasma Wayland session essentially gives me a full-screen resolution inside the host’s VirtualBox window, but with X11, the resolution max’s out at 1440x900 (the same as with my OpenMandriva Xfce VirtualBoxes) . If I select a larger resolution for the X11 session, some aspects of the screen, including the panel, get chopped off.

Is there any particular reason for the differences (Wayland vs X11)?

Is there any particular reason for the differences (Wayland vs X11)?

I never use plasma-wayland in VBox. Only use X11. So my answer is “I do not know”.

Hope I am not to far Off Topic with the rest:

I rarely use any desktops in VBox other than Plasma. I boot the ‘Live’ iso to desktop and then maximize the window. The VM window just automatically adjusts itself to that. If I install the iso I leave the window maximized. I can minimize and maximize the VM windows as needed. (This probably does not work for all other desktops.)

Always use VBox host which can be Cooker, ROME, and occasionally 4.3. The VM’s are in a directory in a data partition so those are shared with all operating systems. Using whatever is latest virtualbox package version that works in each operating system.

Been leaving everything else as default.

I use VBox mostly for testing packages and iso’s and I do a lot of both. Don’t have time to muck about with settings and customization. Most everything I do is with very default systems, little more than what is on iso’s. For testing non default packages I normally test and then remove them when I am done testing whatever.

This works for me but would not be right or necessarily recommended for other folks other than as a starting point.

I certainly am not an expert about how VBox works anymore than I am about how OMLx operating systems work. I am fairly expert at using VBox under the limited conditions layed out above. (If I do say so myself!

Using plasma-x11 I end up basically with this: 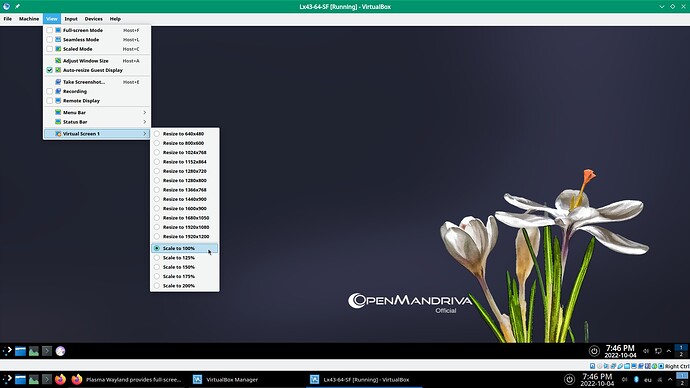 I do test plasma-wayland on my desktop from time to time and it seems to work OK there.

Today using ROME host and ROME VM I try plasma-wayland and get a black screen with no VT’s.

This probably is something we need to start testing, at least in Cooker in case the devs every make wayland the default over x11.

I am seeing the exact opposite as you in VirtualBox. In both Cooker and Rolling, X11 max’s out at 1440x900, but in Wayland, it’s (essentially) full-screen. 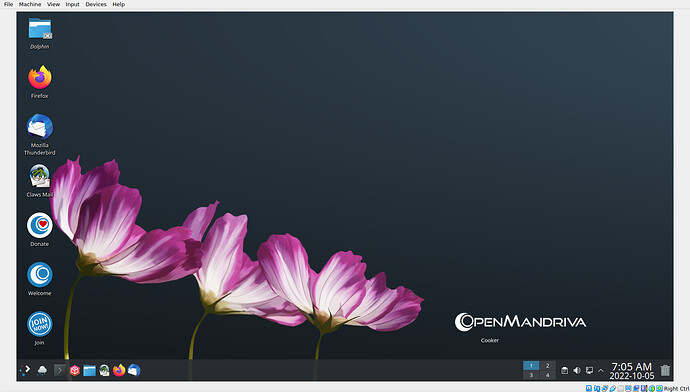 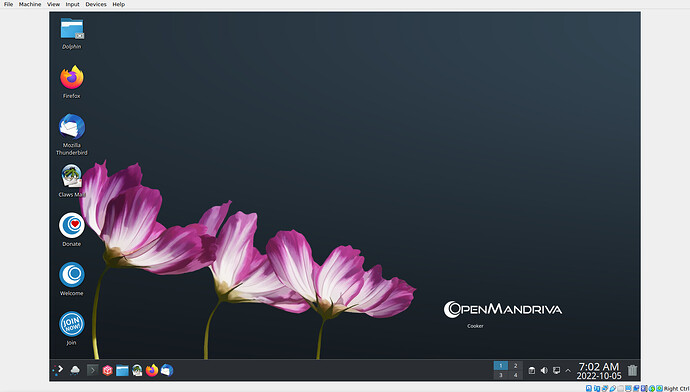 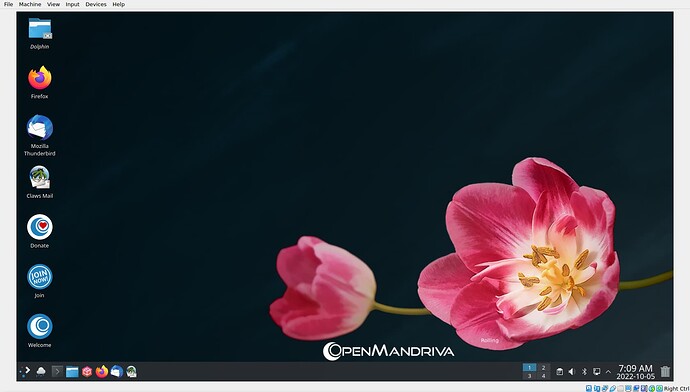 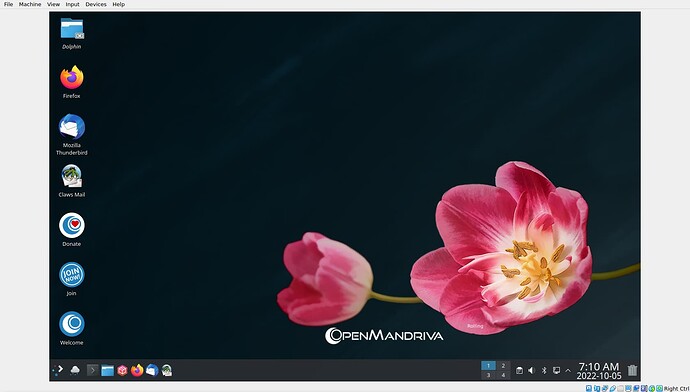 This is Plasma/X11 in rolling-testing after installing x11-driver-video-vboxvideo and selecting VBoxSVGA in the VirtualBox settings. Essentially full-screen. I will install the same package in the other VirtualBoxes and set them all to use VBoxSVGA. My preference is to have the same display with the Xfce cooker and rolling VirtualBoxes 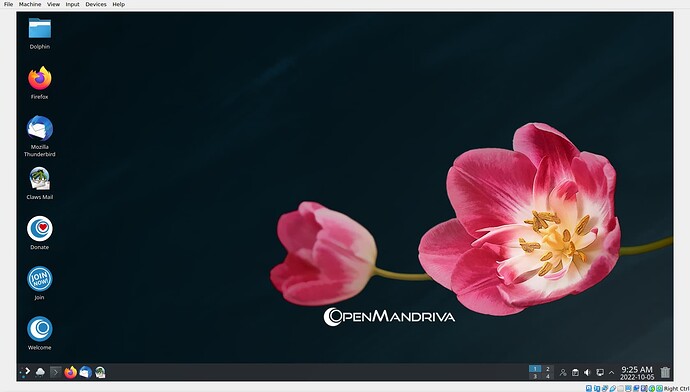 And I now have a full-screen Xfce VirtualBox, using VBoxSVGA.

I am going to do a lot of testing with these, as I now wonder if perhaps the freezing of the Linux host OS and VirtualBoxes may have been related to using VMSVGA with them. (And they might even perform faster, too…) 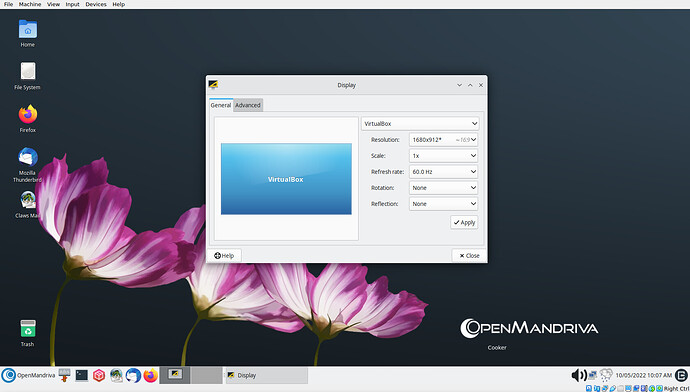 And I now have a full-screen Xfce VirtualBox, using VBoxSVGA. 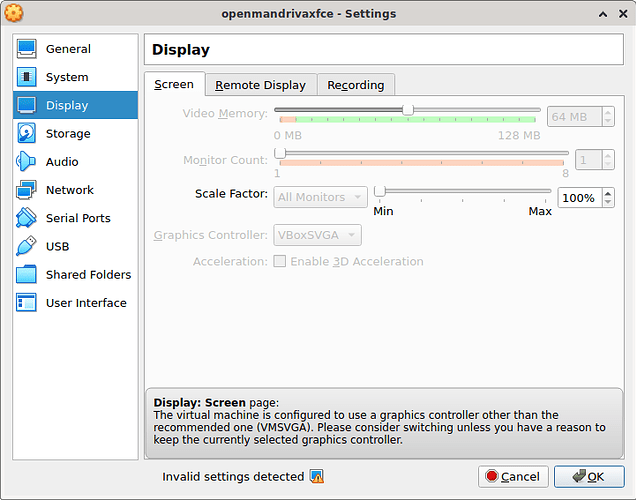 Looking at ROME VM I do not have x11-driver-video-vboxvideo. I do not know what or how video is done now in VBox for Plasma desktop. There are:

Don’t know if any of those have anything to do with it either. I think or guess it is just dynamically configured by magical elves when you boot in to your VM. My memory is that x11-driver-video-vboxvideo was dropped because “It does not actually do anything anymore”. However my memory is not perfect…

x11-driver-video-vboxvideo is in both the Cooker and Rolling repositories.

My understanding is one of those x11-driver-video-vboxvideo is a software package in the OpenMandriva operating system. The other VMSVGA or VBoxSVGA is a virtualization setting with in the virtualbox software. They are not the same thing at all.

But I am more sure we have reached a point, once again, where I can prove I do not know enough to answer your original question.

I think for a developer to answer they would need to know what host you are using and why it is requiring VMSVGA?

Edit: If anyone is using a OMLx os as host when you create a new VM for any OMLx version you want to see this: 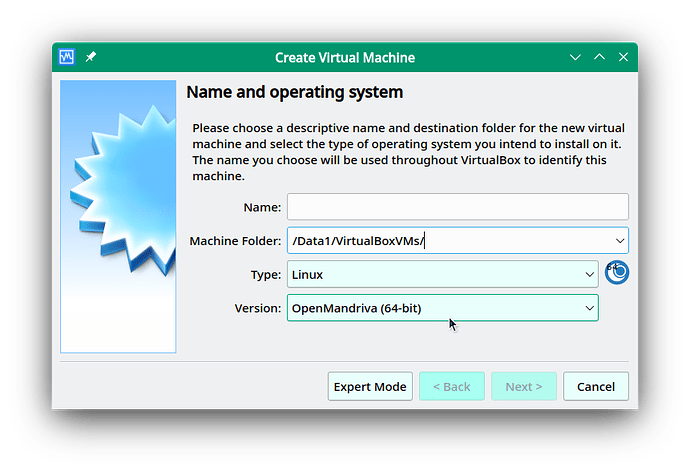 That line where is says Version: OpenMandriva (64-bit) is key. What I don’t know is how to duplicate whatever settings that creates in another version of virtualbox in some other operating system. But I can wonder if that may not be what is needed for @epp?

To be fair folks in OpenMandriva contributor group simply can not answer for what other Linux distros do any more than we can for Windows or Apple. The place to ask such questions is with that Linux distro, Windows, or Apple. They are much more likely to be able to help. Does not mean we won’t try, we usually will if we are able. But being able is pretty limited in such cases.

Edit-2: The fact that OM developers do create this option in VBox should tell us something. I am not sure what this is telling us yet, but now I have more reason to want to know.

My current host OS on this desktop is Mageia (8). The VirtualBox package supplied by them, uses VMSVGA as the default for a Linux guest and the docs on the VirtualBox web site indicate the same.

But some virtualbox.org • View topic - VMSVGA not working advise not using VMSVGA for a Linux guest.

Although the Mageia package lists Mageia and the original Mandriva in the pull-down list for the operating system, it does not include OpenMandriva, which forced me to use Other Linux (64-bit) to create the OpenMandriva Virtual Boxes.