Here are hopefully are the final ISO’s for the 3.02 release.

They have all the fixes that were raised after the last set.
Namely Calamares size in virtual box has been addressed.
Starting Calamares from the second item in the grub menu now works
but may not work on all hardware. So please test on as many boxes as you can.
No need to test the install just the start-up.
kdenlive now starts without crashing and is usable. It still crashes on exit but the cause is known
and will be fixed by an update.
Issues with old libraries being pulled in by the akonadi pim suite have been fixed.
The nVidia drivers are available, tested and working with exception of nvidia304 which has low demand
but will be updated after the release, nVidia 381 will be shipped once it is out of beta which will address all modern cards.
The software on the iso is substantially the same as was on the previous ISO. The only significat change is an update to akonadi which will affect the KDE pim suite kmail, knotes etc. There do not seem to be any issues with this update but some superficial testing may be useful just to cinfirm this.
mlt and kdenlive have been updated (kdenlive uses mlt as it’s engine). The clang compiler has been updated and finally the X drivers see a new release.
Those of you who are running pre-release 3.02 should have had these updates already and so they will have had some testing.
Since there is little to test it would be good if we could have reports in quickly with a view to releasing over the weekend. I am unavailable until Sunday but have done some testing and have not found anything that would prevent release. So it’s a GO from me. If everyone else is happy please feel
free to release.
Thanks to TPG for fixing up the issues.
Best,
Colin

Can we have one common thread in English section for reporting on ISO? Which one should it be? This one or this one?

FWIW: I’m dealing with Family matters and will have limited time for testing. Will do what I can. I don’t know of any reason to not release. If there is a GO/NOGO meeting I’m currently GO.

And yes I know there are some things I’ve talked about needing correcting that haven’t completely happened yet or happened at all yet but there is effort being made to do so. It’s difficult, and frustrating to get some things done with so few contributors.

Can we have one common thread in English section for reporting on ISO? Which one should it be? This one or this one?

Done. Let’s continue discussion here below in this topic.

TPG asked me to make an official announcement and this is it.

TPG asked me to make an official announcement and this is it.

Thank you Colin and TPG.

It’s legit to ask for a dedicated thread, it’s good to have just one active where to collect all reports and feedbacks

It was agreed that there should be a freeze for 4-5 days once the final iso is released.

build 1145 : impossible to install a samba shared printer. Samba is not proposed in printer installation

other question, why the x11-driver-video-intel is not in iso (without it I have no video) ?

No video or no graphics? Meaning can you simply not play videos or do you not have a graphical interface?

Traditional graphic drivers are no longer used by default in Lx 3.02 instead it uses packages from Xorg/Mesa. As far as I know this is unique to OpenMandriva.

We dumped Intel, nouveau and Radeon drivers in favour to modesetting driver. This happened after 3.01 release. Modeseetting driver is way more stable and it eliminates all the strange issues which happened to those drivers.

@ben79 This is not unique to openmandriva, fedora and suse did this too.

I got this warning at first run of kmail.
Don’t know if it’s important nor what it means. Just reporting.

This is 1145 build installed in VB virtual machine. 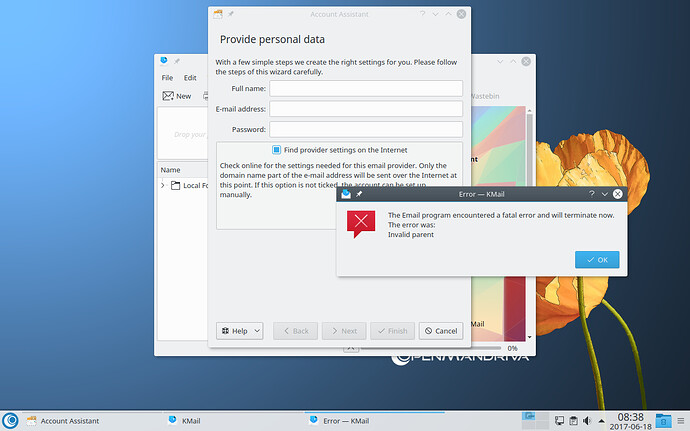 2nd run of kmail from console it seems to me showing nothing useful. Is it? 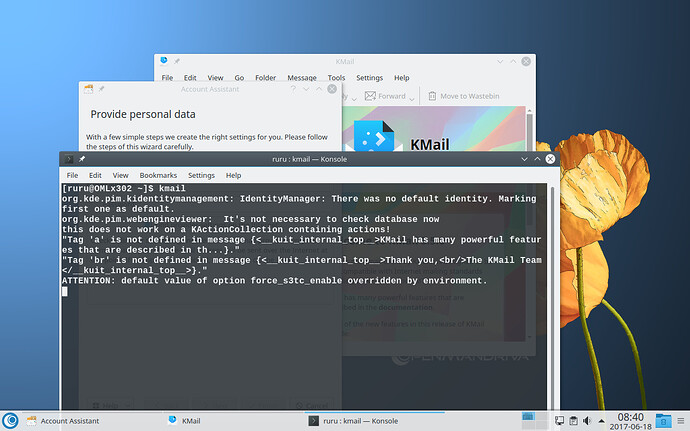 We dumped Intel, nouveau and Radeon drivers in favour to modesetting driver. This happened after 3.01 release. Modeseetting driver is way more stable and it eliminates all the strange issues which happened to those drivers.

Tanks @TPG, but I have old video chipset and the only way to have video is to install intel driver, run XFdrake and modify the xorg.conf to use it and not Modesetting.

But what prevents me from using the 3.02 is the impossibility of installing a printer network shared with samba

Thanks for clarifying that for me/us TPG.

But what prevents me from using the 3.02 is the impossibility of installing a printer network shared with samba

Thank you @luca but I have already tried this solution, unfortunately I can not browse the network and my printer is not found.
All this works with the 2014.2, with rosa kde and plasma

Thanks @Colin but it is not a firewall problem.

something new, when my mouse is over the browse button I have a message :

in English, something as “browsing not possible pysmbc is not installed”

but the rpm python-smbc is installed (but maybe not working)

Thanks for this; I think you may have discovered something here.

and if you use the correct uri with http://localhost:631 ?