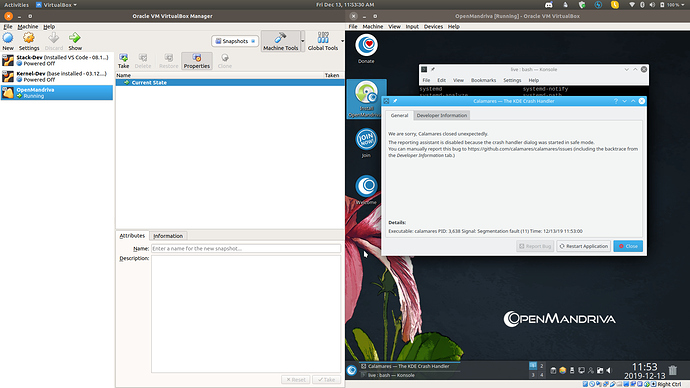 I mean how can be install for an ordinary user on this?? Let say “Zero knowledge”

If this inquiry/ already exist, kindly merged it in order for me to track down.

We need more information. What ISO are you trying to install. (For instance sometimes we see people trying to install from a znver1 ISO on computer that does not have a zen CPU which won’t work.) One way to positively identify exact ISO is when you first boot it in the grub2 menu it has a “Build ID” number. Or identify as something like “The Lx 4.1 Alpha x86_64 iso from SourceForge.”

KDE crash handler is known to not work. I think for it to work user needs to install debug package but not sure about that.

Problems with Calamares installer? Run from Konsole with:

and post entire output in a .txt file here using the upload icon (Up arrow).

This shows that the application Calamares crashed not KDE. So the above suggestion to run Calamares from Konsole should get us to some likely explanation.

Post-edit: I don’t know about runnning znver1 ISO in VirtualBox on non-zen computer. I don’t do that myself. In other words on box with Intel CPU I use x86_64 only and Box with Ryzen CPU I install znver1 in VBox.

The one source of the issue which I attempted on earlier was the “Install OpenMandriva” App from the desktop.

After executing : pkexec calamares -d kconsole
The one caught my eyes is the notification “The system is not plugged in to a power source”

In my humble opinion, it is unique and of course I have sufficient power battery on it to proceed the installation which I think not much power needed, screen below 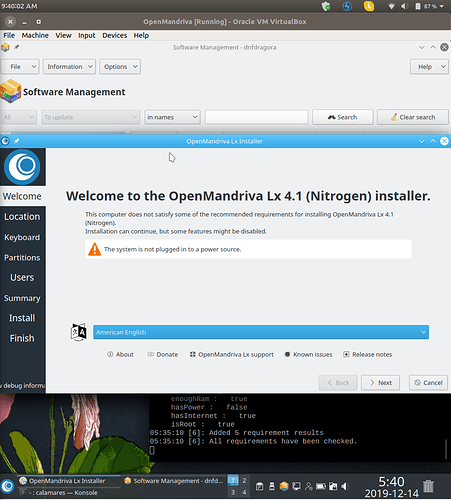 Default Installation was successful after executing the command above.

After rebooting, splash menu come up, and I want to execute ACPI shutdown(Machine -> ACPI Shutdown) from Virtualbox, failed to shutdown. I do not know whether on boot or reboot, does the enabled ACPI already initialized or not yet?

After rebooting, splash menu come up, and I want to execute ACPI shutdown(Machine -> ACPI Shutdown) from Virtualbox, failed to shutdown. I do not know whether on boot or reboot, does the enabled ACPI already initialized or not yet?

Here if I do what you describe from grub2 menu I get this error:

You are trying to shut down the guest with the ACPI power button. That is currently not possible because the guest does not support software shutdown.

Post-edit: Otherwise it is good to hear you got a successful install. Also I would think warning people not to install an operating system with out computer plugged in to a power source would be standard procedure. But it is probably meant for hardware installs not VirtualBox.