Hello,
is there a way to install Nvidia driver on 5.11.12-desktop-1omv4002 kernel?
Actually I can’t find it on official rock repositories.
Thank you for your support.

for devs
there is 2 ways

I do not have nVidia hardware thus I cannot test the driver software. I can test whether the OM Lx packages will install but that is all.

Yes, install the driver that works with that kernel version and your nVidia hardware from nVidia website or legacy site. Any questions about doing this you should ask at the nVidia Linux forum. One may also find numerous tutorials for this with an internet search.

Remember that nVidia proprietary drivers are not only hardware specific but kernel specific. If you install a new kernel version you will need to install a new driver package. Everytime.

I would imagine users find OpenMandriva’s support for nVidia hardware confusing. Officially OM supports only the opensource nouveau driver. This is stated here. There is one part time Community Contributor, @Colin, that tries to make the proprietary drivers available from time to time. As I understand things there will be no new packages for OM Lx 4.2.

Actually I can’t find it on official rock repositories.

In any version of OpenMandriva Lx any nVidia proprietary drivers will be in non-free repository. This command will show what is available:

A recommended alternative would be for user to upgrade to OM Lx Rolling where one would have a choice of:

Which surprisingly works with 5.12.7 which is the most recent kernel version available for Rolling.

Hope this information is helpful to @Marco and other users.

To enable non-free repository for your version of OM Lx: 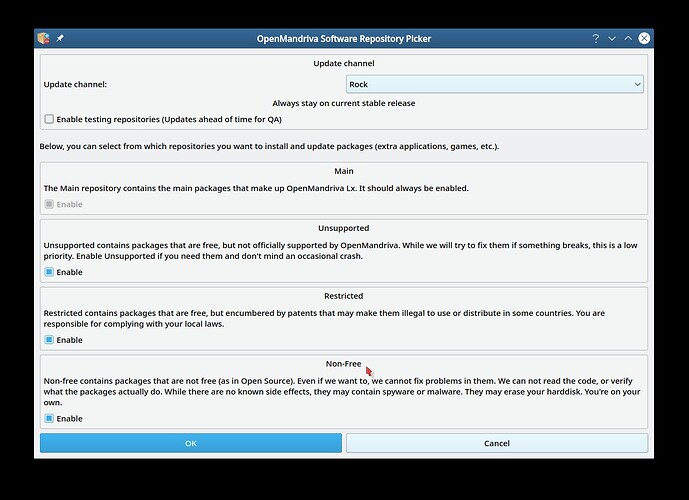 As I understand things there will be no new packages for OM Lx 4.2.

I’m in the process of rebuilding some packages for Lx 4.2 and Rolling. I will post another thread when I get things sorted and get the commands straight and tested. Working with nvidia packages is complicated and sometimes downright irritating.

Thank you for your support.
I realize that dealing with proprietary software is just annoying, but don’t understand why Nvidia drivers are available for the newest kernels in Rolling while they are not for the older, stable kernels in Rock.
I thought Rock repository was more complete than Rolling. Maybe I have not clear the difference between them.

realize that dealing with proprietary software is just annoying, but don’t understand why Nvidia drivers are available for the newest kernels in Rolling while they are not for the older, stable kernels in Rock.

They are available in Rock, I just built them a few days ago.

Today I upgraded OM nVidia proprietary driver packages with the goal of getting packages that work with most recent kernel versions for Lx 4.2 and Rolling. However I do not have nvidia hardware so I can not test if the packages work, I can test that they will install. And usually if a package willl build and install it will work. So I know the packages will install but we need you to tell us if they work. The Lx 4.2 packages install and should work with kernel v. 5.11.12. The Rolling packages in…

Thank you so much, Ben!
I confirm Nvidia driver for kernel 5.11.12 work fine.
Great work! I look forward to getting the 4.3 release.

Thanks for the feed back. It helps.

Great work! I look forward to getting the 4.3 release.