This is an experimental build of the non-GLVND legacy drivers. My kit is too old to test this so it’s over to you guys with ultra-modern hardware. nVidia-long-lived will follow soon.

If we can’t get any testers for nvidia proprietary drivers is there any reason we should be building them? Neither @Colin nor @ben79 can test these because we don’t have the hardware.

Did you have easy add for non-free repo? 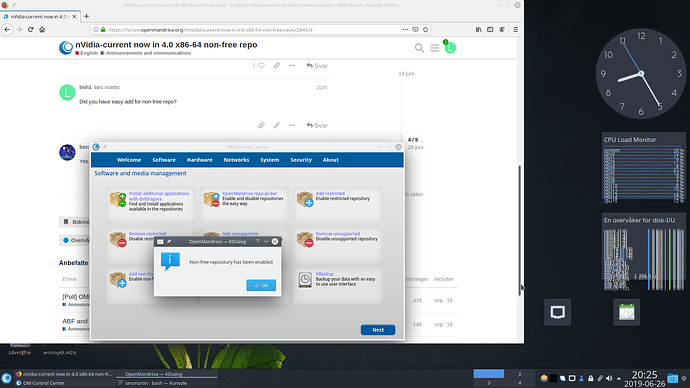 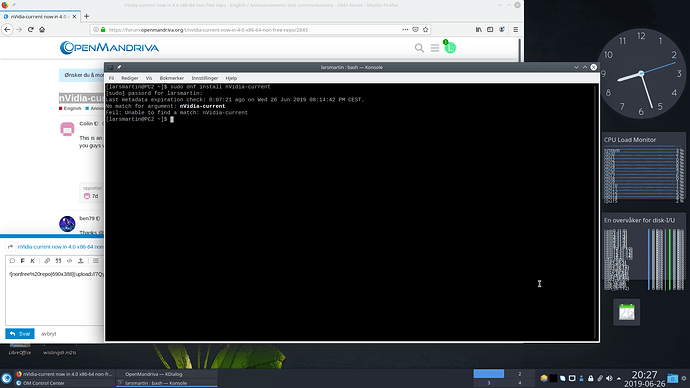 in 4.0 packages in non-free/updates So you need enable updates repo too.
Also look at packages name. You use wrong name. Look here: Index of /4.0/repository/x86_64/non-free/updates/

@AngryPenguin thanks as always for your wisdom. In another post he shows that he is still using cooker not 4.0. This is kind of important to get right.

Plus he needs to use the correct package name for dnf to work.

Post-edit: For 4.0 the packages are here.

I have no idea what @lmh1 is posting about.

As far as the nvidia-current drivers I don’t know of anyone that has bothered to install and configure them to even see if they work.

Post-edit: I don’t have the hardware to do this. My best guess is that a user would need to install x11-driver-video-nvidia-current-430.14-2-omv4000.x86_64.rpm and dkms-nvidia-current-430.14-2-omv4000.x86_64.rpm and then user would need to do this. Post-edit-for-challenged-users: Links provided are for 4.0 repository if you are using a different repository find the corresponding packages in the repository you are using.

This is a community distribution. Some people in the community with nVidia hardware need to figure this out or we can abandon our efforts IMO. Post-edit-some-more: Don’t know how many times we need to tell people we don’t have hardly any nVidia hardware among contributors group and what little there is is old. So this is really and truly something other people are going to help with or it won’t be done.

You want us to pay for drivers…rofl…

All i need is a current code command book if madriva lx 4.
I have had to combine two diffwrent sets of linux commands and gueuss a bit to get around my lx2 phosohorous intall.then when tranfereing the files to boot partitions…grub 2 corrupted…
So im using plasma…already found a few bugs…nothimg huge…i love madriva ir mandrake.

Nvidia are some of rhe best graphics xhip combos made…maybe. NVIDIA should Purchase or Create linux drivers themselves…
Or if for urchase.
Please supply the open source.
Im just re-starting to learn programming n scripting…
So im at the begining once mire n have an old 2010 nvidia chipped ZOTACminiPc that looks like it was made for Superior linux​:facepunch:

Welcome @bigmeatheadmusic to the OpenMandriva forum and OM the distro. Hope you enjoy your time with the forum and the distro.

Otherwise I’m thinking @ben79 should remove himself from this conversation due to frustration and other factors.

Hi,
you misunderstood the meaning of non-free. We don’t make anyone pay for anything, and we do include the Open Source nouveau driver that generally works.
The “non-free” in the repository name has nothing to do with price (you can download it for free), it has everything to do with the contents of the repository not being Free (as in Open) Software. That’s not our fault, it’s nvidia’s fault and we hate them for it.
While their hardware quality isn’t bad, nvidia is – because of their driver licensing and their general attitude towards anything that doesn’t come out of Microsoft or Apple – worth boycotting.

Of course we need to keep old stuff working, but if you’re thinking of getting new hardware, please consider supporting a vendor that supports open drivers – anyone but nvidia.

Did you test it?

I don’t have the hardware to do this.

Some posts are just plain dumb.

Also @lmh1 if you had read the original post in this thread perhaps you would have caught this:

This is an experimental build of the non-GLVND legacy drivers. My kit is too old to test this so it’s over to you guys with ultra-modern hardware.

Note: The word legacy is probably an oversight on @Colin’s part as the 430 drivers are the most recent and thus “current”.

This is a call for testing, as several users complained about missing nvidia drivers.
But I’m not seeing anyone of them actually testing and leave a proper feedback.

This is a call for testing , as several users complained about missing nvidia drivers.
But I’m not seeing anyone of them actually testing and leave a proper feedback.

I moved this to Development Testing for the above reasons.