When I asked “Is this what you get?” I meant to ask you if the new longer log file (“failed calamares install log.txt” - 1,012 lines) I was uploading came through for you to view, instead of the truncated version of only 393 lines you reported, which did not contain the lines 938 - 974 I had referred to.

Regarding the suggested quick workaround:

It appears that the responding dev is presuming that I am personally attempting to do this.

I was not personally responsible for trying to delete the root user via a CLI-based installation… I merely entered the requested installation information by filling out the on-screen GUI-based Calamares installer page section asking for the user name and passwords. (I entered a name and user password, and left the admin password blank.)

So:
My immediate response is to attempt the installation by creating and entering both the user and admin password.
(Attempting now, will advise of result.)
TTYL

Ok, got past the previous error to the 90% (on-screen) progress indicator, failed with message:

I will run installation again with the log saving option.
TTYL

I was not personally responsible for trying to delete the root user via a CLI-based installation… I merely entered the requested installation information by filling out the on-screen GUI-based Calamares installer page section asking for the user name and passwords.

No one thinks you were trying to delete the root user, it was setting root password empty that is doing this. This is actually a bug that may go back to Mandrake days. Thanks for discovering and reporting this.

Any fix will only appear in future versions of OMLx. The fix we are attempting needs to be tested and that will take some time.

Once again, installation got to the 90% (on-screen) progress indicator, failed with message:

I found a few Google references to the message, but none appeared to be directly related.
Any suggestions?

The external command that failed to finish is:
[/usr/sbin/calamares-post-script

I entered that command in Konsole and obtained this result:

Now attempting the installation as su (sudo), will advise…

The correct command to install from Konsole is:

Not sudo or su. To run Calamares in Konsole and generate a log file in the /home/live directory open Konsole and run:

For all users: This is correct command for any current version of OMLx including Cooker, Rolling, and Rock. If anyone has trouble installing OMLx read this first.

That’s what I had originally done, which failed with this message:

I am now going through your “read this first” link point-by-point to exhaust all cited possibilities.
Will advise…

I ran inxi_F.txt per your link suggestion, and obtained the output of the attached file:
inxi_F.txt (2.0 KB)

Note appearing at the end of line 3:
<superuser required>

As you had previously stated not to use the sudo command, I presume that there is another alternative way to do this, and am exploring options.
Suggestions?

As you had previously stated not to use the sudo command

Apologies for any confusion I have caused.

No I did not mean to not use the sudo command. To run the Calamares installer requires a very specific command. For Calamares it needs to be pkexec not sudo. But sudo is perfectly OK for most things one would do in terminal that require super user privileges.

pkexec=something like packagekit execute. Using pkexec has to do with the scripts Calamares runs.

As far as inxi -F the only thing that needs super user is serial number of computer or motherboard. Generally that is not needed for problem solving here. You might need that for dealing with the people that made the computer of mobo. You can run sudo inxi -F or sudo inxi -M if you need those serial numbers.

Ok, thanks for the clarification.
Unless you have any other ideas to try, I suppose the appropriate action would be to submit the information in a bug report.
I haven’t done that before, but I did sign up & log in to their site. I’ll check back tomorrow with you here before I post to their site, in case you have any suggestions.
Thanks again for all your help.

Ok, back on the case…

Following the most recent installation attempt from live boot in basic graphics mode, in which Calamares fails and exits. (See attached screen shot.) 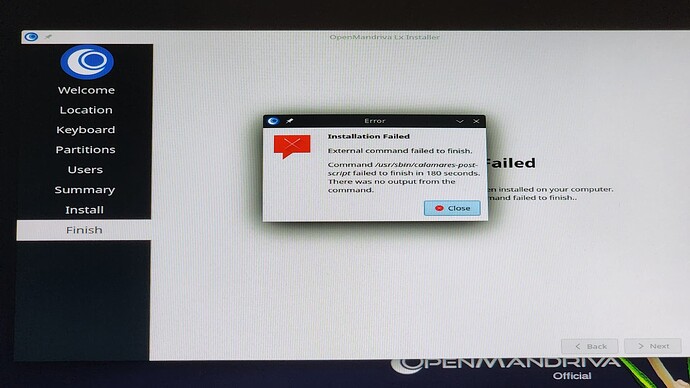 Please advise if you think I should present this information in a formal bug report.
Thank you.

Edit: Posts like this are humbling to the author…

Uh, oh, maybe I was wrong and that is how the command:

creates it. Sorry about that.

Worth noting: the error is for /usr/sbin/calamares-post-script which is a post installation script, and for some reason it times out before it finishes.

Your install log seems to show a successful installation with boot loader installed. When it gets to this point:

The important part there is “Installation finished. No error reported.”

It is done. Calamares has finished installation and installed grub2 boot menu with an entry to boot /boot/initrd-5.16.7-desktop-1omv4003.img,

After that all it is doing is removing unneeded packages. It then removes most of those packages and at the end something times out. And I think maybe 5 packages did not get removed.

So try booting into the new system. If you can boot into new system then you can open terminal and run:

If you have graphic issues with that computer it is because of this:

I do not have nVidia hardware and I have no idea what is best way to handle that nVidia chipset.

Another thing to remember that Rock/OMLx 4.3 does not work with secure boot enabled in BIOS. I recall that you had previously had Windows on this box so might be worth checking the BIOS and being sure that is disabled.

Thanks for the reply, Ben.

Clarification:
I did not have Windows on this computer,
Windows was previously installed on the original 40GB drive, which was removed from another computer. The most recent attempt replaced that 40GB drive with two WD 13GB drives.
This computer does not have any secure boot function setting options appearing in the BIOS, so there’s nothing I can do about that.
The “basic graphics” boot setup works fine, the default boot option does have some glitches. The Nvidis graphics are on-chip MB graphics. I’ve used this same board for many years with various incarnations of open mandreva, Although there would be some mentions in the logs about Potential restrictions, I never had problems with the video previously. (I never attempted anything particularly out of the ordinary as far as video graphics.)
From looking at the logs I saw many repeated any repeated entries that something called uvedma (spelling?) was not responding as expected. I’m not familiar with that, but from what I can tell it has to do all it has to do with overseeing overseeing devices, So I ran the disk checking utility in K Partition Manager, and that showed no errors.

Do you think I should forward this information to the bug report link you sent me?

Do you think I should forward this information to the bug report link you sent me?

Again the Calamares installer installed boot loader. Did you try to boot in to the newly installed operating system?

From looking at the logs I saw many repeated any repeated entries that something called uvedma (spelling?) was not responding as expected.

Why report something this way? Post the exact journal entries or post the actual journal log. Edit: But udev actions are critical so that could be something very important.

The most recent attempt replaced that 40GB drive with two WD 13GB drives.

A 13GB / system could get to full rather easily.

Booting into default GUI, logged in as user, returns this screen before I can open a terminal: 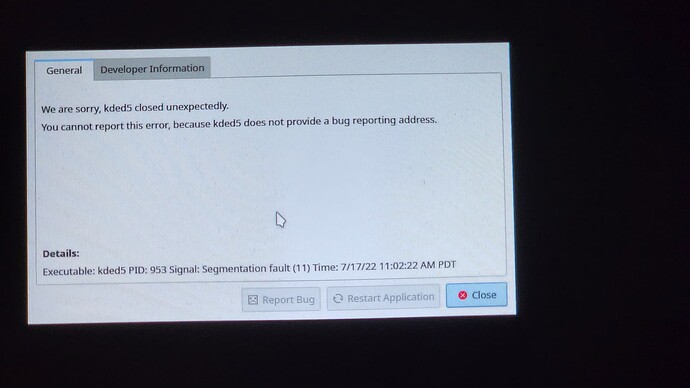 Booting into Advanced Options CLI, logged in as user:

Thanks.
Booting into Advanced Options CLI, logged in as user: 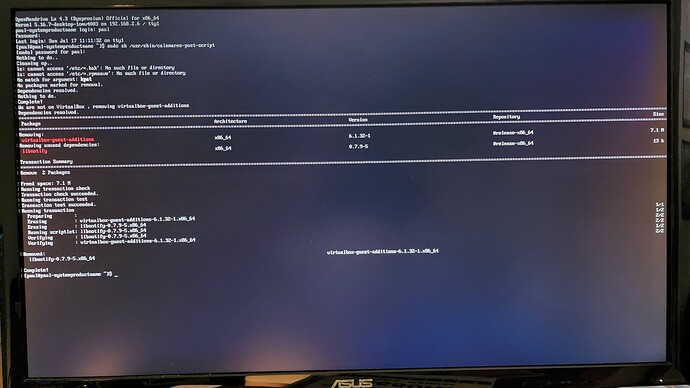