This morning I just boot up in OMV Lx3 to update Plasma, according to what was said in https://discourse.openmandriva.org/t/updated-plasma-and-kde-framework-packages-for-om-lx-3/200/8.

But I had a surprise. Discover (v. 5.5.1) lasted about 15 minutes to finally say “The software on this computer is up to date”. But urpmi told me in less than a minute that there were 701 packages to update. 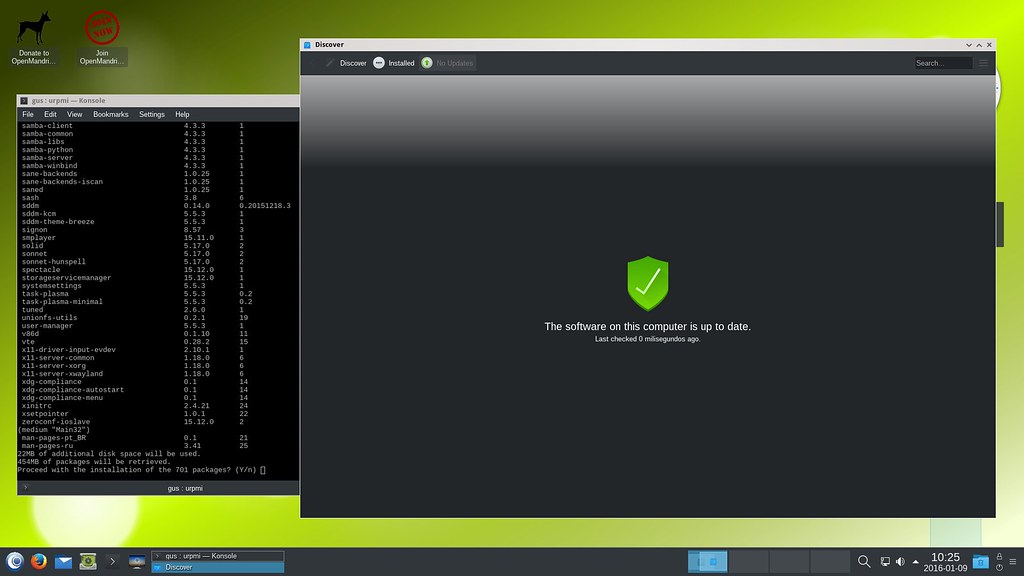 I don’t publish this in Bugzilla yet because discover is one of the packages being updated (to 5.5.3). However, there’s no bugs reports in https://issues.openmandriva.org regarding the discover package. Does the problem in discover was previously known?

After the update I’ll see if discover and urpmi both say the same.

I found, checking System Monitor, that muon and discover are the same. So bug 1381 refers to discover doing nothing and lasting years.

Yes. I just found that !

The bug was originally reported by @luca on October 10th 2015, three months ago.

Anyway, discover (and muon) are KDE packages. I really prefer that package maintenance be managed for a more desktop-environment independent package.

Yes it is well known problem that packagekit (muon/discover is a frontend) does not work really good with urpmi.
I’ve tried to debug this many times, and i just gave up

Is it too hard to “extract” or “adapt” part of the code (the part where talk about updates) of MCC? Or to create a front-end for “urpmi --auto-update”?
mdk-applet already do this. Why change it?
I still prefer a DE-independent way to apply updates.

PS: I don’t use just “–auto-update” but I also add “–download-all” and “–noclean”, to avoid problems when a big number of packages needs to be updated. Those options are not present in the MCC front-end, so I normally update from the CLI everytime a mdkapplet alert appears on my notification area (OMV 2014).

Is it too hard to “extract” or “adapt” part of the code (the part where talk about updates) of MCC? Or to create a front-end for “urpmi --auto-update”?