How many java packages do we count on OMV repositories? 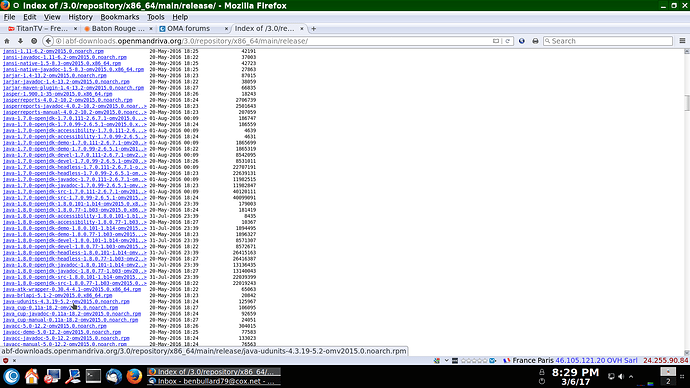 Edit: to list literally every java package from cli:

I will double check (or triple check), but it seems that an important application I will have to use these days works only with openjdk 1.8 or JRE packages. In OMV 2014 it was possilbe to configure the system to use one specific java package via alternatives, then having openjdk 1.7 and 1.8 and JRE packages was not a problem. Maybe it is worth filing a trivial/enhancement bug suggesting the availability of these extra java packages, isn’t it?

Found openjdk 1.8 at cooker. Did someone already try it at OMV LX 3.0?

Look above that’s a picture showing java-1.8.0-openjdk in Lx 3 main repository. It’s right there. I have it installed here:

It might be worthwhile to do a request for sun jre java if you can document a reason why only it and not openjdk java won’t work for something.

In OMV 2014 it was possilbe to configure the system to use one specific java package via alternatives,

That’s still possible if it’s necessary. The command would be:

I’m confused. I have two computers. In one of them I got no reference for openjdk-1.8.0. I have no access to it now. This one I’m just using has this java release. Sorry, but I have to check why it looked absent for the other computer yesterday.

And no, I probably will not need proprietary JRE. I’ve just consider that because I thought 1.8.0 was not available for OMX LX 3.0

Aging process is inevitable! Maybe this explains the confusion I made!

I’ve not seen any reference to openjdk 1.8.0 because MCC was configured to show only graphical interface packages (why openjdk 1.7 was shown?).

Now I’ve installed openjdk 1.8 and went to the next step.

I tried to quit having birthdays.