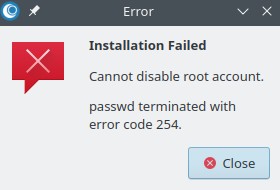 Why would someone do this. It is a security feature that some folks may find useful or desirable. Default behavior for OMLx is that root with no password equals root account is locked so no one can login as root. Administrator functions will need to be done as sudo.

Default behavior for sudo is that Calamares installer adds the “first user” or the user created by the installer to sudoer list. Any other users that one wishes to add to sudoer list must be done manually with visudo.

Users can learn more about this by doing their own internet search. There are short articles about this here and here.

OMLx developers report this issue fixed in Cooker branch. In addition it was decided that this is not something that should go in OMLx 4.3 as there could be packages or scripts that rely on the old password implementation.

I just tested Cooker ISO # 1268 using root=no password and installation was successful with no error.

Cooker is development branch of OMLx. I doubt you would want to install it for production use as we guarantee that it will be broken at times. That “being broken” is a natural consequence of the work developers do. You might find in interesting to test this though.