At home I have a printer plugged in my isp box (free a french isp). I can reach this printer with windows and linux (omv 2014.2) with smb protocol and all this works fine.
But I can’t install this printer with lx3
with system-config-printer I can’t browse the network when I choose

over the browse button with mouse I have this message

"browsing not available (pysmbc not installed)) but pysmbc is installed . 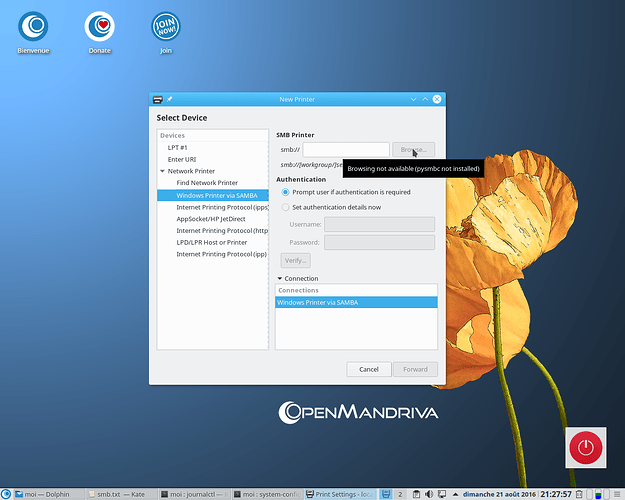 with http (localhost:631) It seems installed but I can’t print because a password is necessary and I don’t know how to say that when I configure with http
here is the message returning for the print job

Is there a possibility to install pysmbc or python-smbc (i can’t see the name of packages right now)?

you can try in this way
smb://username:password@server/printer

python-smbc is already installed but seems that system-config-printer is searching for something different.

it seems that python-smbc is a python2 pkg…

Is it a problem being a python2 package?

if system-config-printer use python3 it’s a problem. the name of the package in lx3.0 is anyway wrong. python-xxx are python3 pkgs, while python2-xxx are python2

you can try in this waysmb://username:password@server/printer

I see name and password but “Verify” is in grey

in konsole I see

when I print test page I have

with http idem also, but as my pc freezes often I have stopped to search

I also have a list of bugreports, but I do not want quarrel or stupid answers.