Help with testdisk for recovering partitions

In the image you can see the results of testdisk.

My first question is: how can I change the start point of my NTFS partition inside testdisk?

My second question is: is it safe if I first recover the NTFS “big” partition (the one with the files, but reserving all the space), then change its size using gparted and finally trying to recover the Linux partitions using testdisk again? 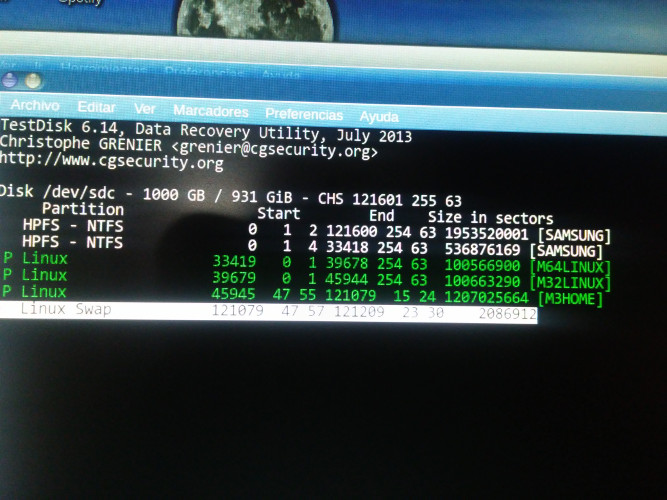 Hi,
what I would do first is the saving of the image of your disk using dd or alike. If you have not enough space but enough time, you can also compress the image. Example (adapt the parameters):
– copy with compression

I would also try the last version of testdisk

Now you have several possibilities:
– restore the first NTFS partition and copy the files somewhere else, then restore the image and do the same with the ext3 partitions
– copy the image on another drive and work with testdisk on it.
– if nothing works in an acceptable way, you might try to restore your documents using photorec. If the most important is restoring your documents, photorec might be the first choice as it doesn’t modify anything on the corrupted disk.

[quote=“Sirius, post:1, topic:1339”]
My second question is: is it safe if I first recover the NTFS “big” partition (the one with the files, but reserving all the space), then change its size using gparted and finally trying to recover the Linux partitions using testdisk again?
[/quote] I don’t know but it might be worth a try.

Thank you very much, Jean-Claude.

The disk is not my main disk, so my system is still working fine, and I don’t lost files up to now. Sadly, I don’t have enough space to save the image disk in another place. I need 256 GB (well, it’s the size of the partition, it was not full), and the only one place where I can save that much is in the “M3HOME” partition (see the image) on the same disk !!! As I can gain access to my ext3 partitions, I guess I don’t need to save the whole terabyte into a file.

What I’m doing for now? From inside testdisk I can save particular directories in another disk, so I’m slowing moving folders to my main disk and then saving them in DVDs. The process is very time-consuming, of course, but it’s safe.

testdisk I’m using is the last available version in 2014.2.

You may try to backup only MBR (512 bytes) then you may change the original partition table with testdisk or make a new one with testdisk. You may find some more info searching over the net (for instance here). It a bit risky if you have never tried it but could work if the disk is not physically damaged and you never mount the disk with write permissions on.