The OM Lx 4.1 Alpha/Beta ISO’s will be built from Rolling branch and will use Rolling repositories until repos are split for final/GA release.

Installed the x86_64 ISO on hardware system. One of the first things I noticed is that in SystemSettings when I go from on module to another SystemSettings crashes. I’ll endeavor to get Konsole output and journal logs of this later to day. Ran out of time yesterday evening.

Otherwise the system so far seems to work OK but this is based on limited testing of about 1 1/2 hours so far.

Users need to know the Rolling branch is still experimental/Alpha at this time. This is mainly because we are sorting out the kinks in maintaining this branch. There are some differences in maintaining a Rolling system as compared to Stable system.

The goal for Rolling is a stable, usable system with more up to date packages than in our Stable branches Rock and Release. More here.

This is the problem I’m seeing. It happens when I leave one kcm module and attempt to open the next one. Mainly the kcm Appearance, Workspace, and Personalization modules: 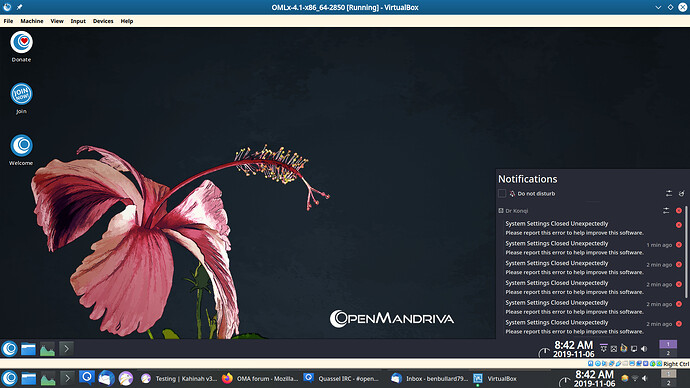 There is some unfamiliar packagekitd stuff in journal logs as well. Don’t know what that is about or if it really means anything is wrong. The logs are from hardware system.

This is the firewall-applet. I’m wondering if this really needs to be there by default? I mean if user needs to access firewall settings that is easy enough to do. 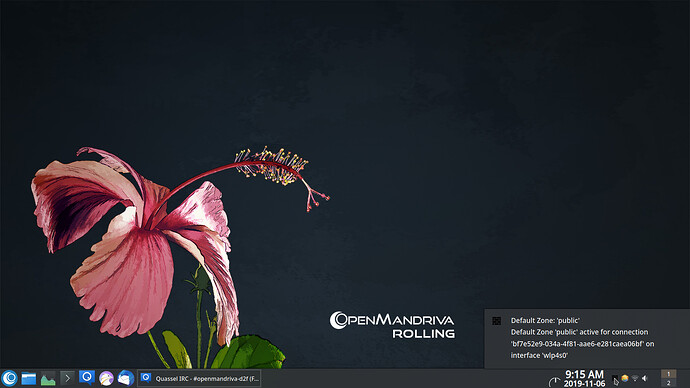 Due to the problems mentioned above about crashes of kcm modules in SystemSettings we are doing some package maintenance on the Rolling repositories. We hope to build new ISO’s tomorrow.

The ISO’s posted are OK for pre-Alpha testing. As far as I know other than the issues in SystemSettings things are working OK.