@bero just did another copy of Cooker to Rolling earlier today. This will give Rolling users a lot of new software.

Also this is a preview of upcoming OM Lx 4.3 release. Plans are to release what in now in Rolling as OM Lx 4.3 RC if our internal testing goes well.

To do this upgrade it is necessary to do it correctly in Konsole like this:

In the next post I will discuss 2 things to be aware of when doing this upgrade in Rolling.

The first thing to be aware of, and this is common with these upgrades from Cooker is this which you may notice in the dnf output as it scolls by if you are watching:

that is not a problem but the warning is this >>> On an existing system those are the files that contain your users, groups, and passwords. So generally you will want to keep the original files. Easy to do.

When you get to the end of the dnf distro-sync you will see output similar to this: 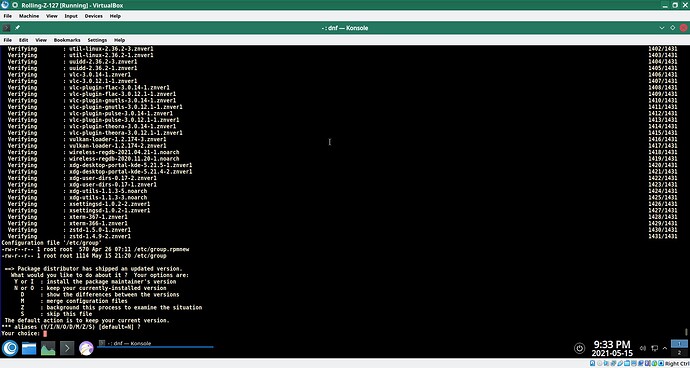 See the line that says “The default action is to keep your current version.” Normally that is what we want to do. So for the default just press the Enter key. There are four of these files so usually there are four separate dialog instances where you will press Enter key.

Note: When you see these kinds of dialogs with dnf please read them, in this case the default is what most everyone will want. But that is not always the case, if in doubt ask us.

The second thing to be aware of is more obscure and has only affected a handful of users that we are aware of. It is this described in this bug report. The workaround is in the bug report.

This one has happened when people distro-sync a Rolling system that had not been upgraded for a long time (weeks or more). The user sees dnf stop working. I can not recall the exact error but I think it is some libdnf or dnf-python error. What happens is that when the icu-data package is upgraded for some reason the new symbolic links for the .so files get erased. The workaround replaces those symlinks.

@bero just did another copy cooker 2 rolling, mostly to get a few bug fixes in plus @TPG added upgraded packages for systemd, dracut, lvm2, and a few others. Obviously not so many packages this time.