if you have kernel version 4.14.14-desktop-22omv this is the one I switch back to

Sorry the kernel change did not work , I will help research more for a resolution , if not kernel related , then maybe config file or run control (rc) on start up . It’s time to do some reading on the subject and backtrace the steps…

on my way to the airport …

So it has not been changed. Could you please post its content and the output of the following commands?

_# /etc/fstab: static file system information.
_#
_# Use ‘blkid’ to print the universally unique identifier for a device; this may
_# be used with UUID= as a more robust way to name devices that works even if
_# disks are added and removed. See fstab(5).

I tried to include text between “code” and “/code” in square bracket but with fstab it don’t works. Now I see I have to add an end of line

Could it be that the filesystemd is dirty and thus systemd will not mount it? Try cleaning the ntfs and try again.
systemd has automated fsck but maybe the driver for ntfs isn’t installed.

urpmi ntfs-3g
Then use ntfsfix. You’ll need to read the man page but as I understand it there is a command to clear the dirty flag. It can do a lot of other things too.

I think this is what you asked for:

and it seems partition is ok.

Still valid this nasty bug.
Any idea on how to mount an NTFS partition at boot?

If you need to learn more about any of the above use an Internet search. AKA: Google-ing.

And all users need to know that you can add partitons to an installation simply by using ‘Manual Partitioning’ and adding the partition. You’ll need to name the partition I un-creatively use for instance /Data1 and /Data2.

Screen-shot of KDE Partition Editor showing a /Data1 partition on a Hard Disk. 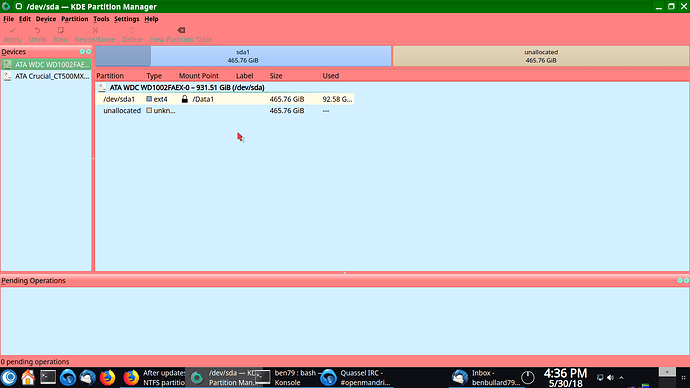 Typically I add this when I install an operating system. If I’m installing OpenMandriva I use “Manual Partitioning” to do this. But you can do this after installing with the KDE Partition Editor or other utility such as GParted or DrakDisk.

Screen-shot of /Data2 partition on same Solid State disk as operating systems on a multi-boot computer: 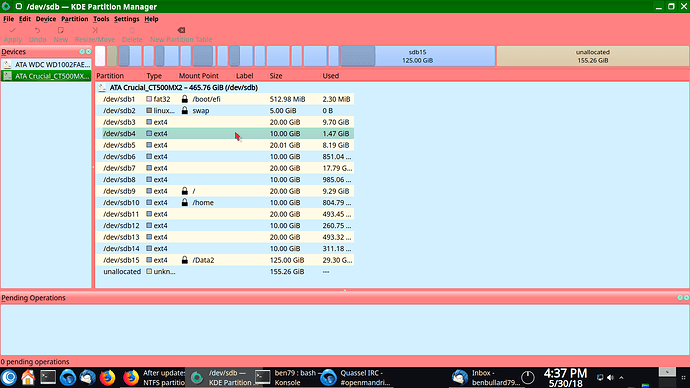 Normally you add the partition to /etc/fstab/.

In post #11 Colin seems having a different opinion.
And I don’t edit /etc/fstab/ since long time. Remember that automount worked till few months ago.

This is my question too. I don’t see anything in KDE Partition Manager that allow automount. Nor found anything in the net.

Remember that automount worked till few months ago.

Edit: In my first reply I got the answer completely wrong. What happened was at some point possibly from the beginning of Lx 3 it was set to mount everything, ie. all partitions on a computer that it could detect. This is considered to be a very bad practice by Linux developers so It was changed in the recent past probably at the time of the update where @Giorgio computer witnessed the change. So this is not a bug and will not be changed back to previous behavior under any circumstances. Again this was changed as a bad design practice that can lead to security issues as well as problems with booting and other problems.

This is my question too. I don’t see anything in KDE Partition Manager that allow automount. Nor found anything in the net.

Well. I think @ben79 explained it well and clearly.

If you still can not find this option read this:

use tool from openmandriva control center or kde partition. I prefer an old school method (I have a fondness for old times) but you can use kde partition in the same way.

I have the screen-shots for how to do this in KDE Partition Manager and will post a tutorial soon in ‘Resources’ category. Does not matter if partition is NTFS or other FS.

Dudgum EDIT: I know from experience that what @AngryPenguin posted above about DrakDisk also will work. It is very easy to do. Does not matter if partition is NTFS or other FS.

Thanks for hints. Using OMCC partition is mounted at boot then problem is solved. I’ve not tried before this way because is deprecated.
But I have two comments

use tool from openmandriva control center or kde partition

OMCC and KDE partiton manager is completely different, absolutely not equivalent. We will see how to get same result using KDE tool.

May be is bad practice in general but I need this partition mounted. The real bad practice is changing settings without user permission! And this is not the first time it happens. In my school lab suddenly boot order changed and my colleagues complained about it! Then I had to change settings in 18 pc with OpenMandriva!