Achtung: background.png does not display in sddm login screen

When I boot ISO live the image ‘/usr/share/sddm/themes/breeze/components/artwork/background.png’ displays on the sddm login screen. That is the one with the yellow flower designed by Cristina. After I install system (hardware) it is no longer displayed only a boring plain blue screen. Any idea why this is? How to fix?

I’ll be checking this on VBox later today but as I remember it is same.

I miss my pretty flower.

Never happened to me…

(never in vb, but also I installed in hw)

Ben, if it was happened to me, be sure that you would have heard me shouting even if I’m here and you there

Well, now I’m feeling like a second class OM user… Other people have a flower on sddm login screen and I don’t.

I’m sure that I can help you to get back the flowered bg. It will be done asap. Problem solved.
What it’s interesting to know is why it happened, and more if it’s your local issue or it is affecting also other users.

you may take a look at journalctl -a.

I found out what causes this. If you do a fresh install (ISO build ID 1180) you have the flower background on sddm login screen. However if you change anything in SystemSettings>Startup and Shutdown>Login Screen (SDDM) you then get changed to the plain blue background. As far as how to get it back after changing anything there I don’t know what to do.

As far as how to get it back after changing anything there I don’t know what to do.

Go to Systemsettings at the same location, click on the green-ish icon near to Background
Load from file.
This should work. 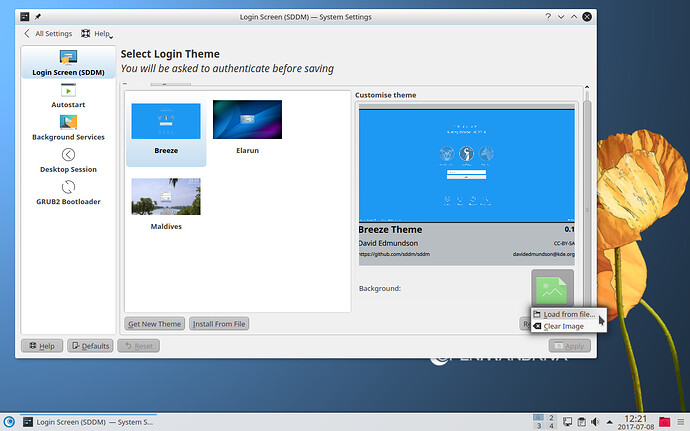 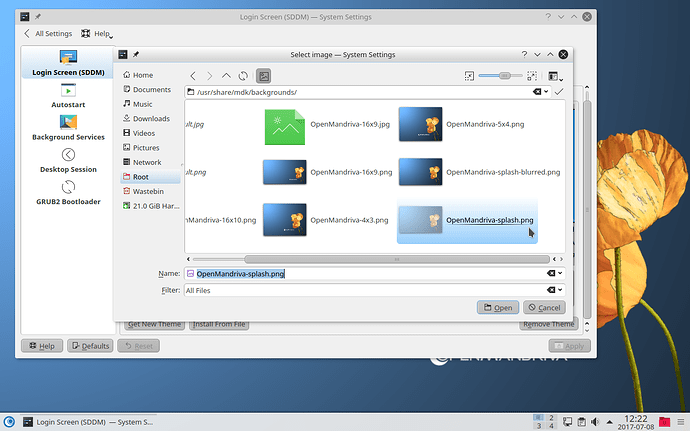 Thanks, I knew about the green icon but wasn’t finding the folder with the correct files to fix it.

Edit: Closing thread it is resolved most satisfactorily.