Does this look familiar to one of you?

Maybe for different reasons but I’ve had problems with swap and dual boot. Some of the steps I’ve taken to solve that problems are commented here,

In my case, problems came from bad choices during installation.

Don’t know much about it.

This probably should be a bug report.

A question. Does your Lx 3 system/systems ever use swap? Mine don’t, ever, that I’ve seen. With swappiness set at 10 a Lx 3 system won’t use swap until 90% of RAM is used.

Also check the 4th line of your .png where is starts "See ‘systemctl status …’ try to run that and see what it says and post that here as code also post contents of /etc/fstab as code.

Also google might come up with some interesting information such as this and this.

Helpful hint: Posting the log is great but it is more useful if posted as code (ie. preformatted text icon: < />).

I never checked if my system uses swap, I stumbled on the problem because I saw a boot error passing by. On my installation swappiness also returns the value 10

Here is the output of the systemctl command:

And this is the contents of /etc/fstab:

Regardless swap should work. I don’t know what to say or do about this situation so we need developer help. Could you post this issue on the Cooker ML?

At the moment developers seem to be elsewhere, perhaps somewhere in Europe in a Beer Garden.

Edit: Or better yet file a bug report?

On modern machines swap in not more so mush used but it may help in some case and it is mandatory if you use hibernation of the system.

I don’t know if swapon can handle directly with encrypted partition.

An usual configuration is to use LVM on LUKS.

Finally imho keep /home in a different partition with respect / is always a good practise.

swapon -s doesn’t give any reply

The second command produces an error:

I now got the time to look deeper in this encryption method and it looks by far not that promising any more.

Do I understand this correctly:

This isn’t so convenient.

Your LVM on LUKS solution and Ben79 's link are at first sight far better solutions.

But there is a problem, both solutions are using the mkinitcpio or update-initramfs commands which I can’t locate on the OpenMandriva installation.

Did one of you already test this procedure, know the location of these commands or know alternative commands?

Five times if you encrypt /boot ;). However there is the possibility to store the password on the disk so you don’t need to insert it each time, or use on time automatic password for swap.

About ‘LVM on LUKS’ you need to insert two time the same password. Actually the problem is Calamares has not support for LVM yet. I opened a discussion and a bug report but the problem is the upstream. So I haven’t tested on Lx3 yet.

I experimented a little bit with Full disk encryption with LUKS (including /boot) as mentioned in Ben79’s link. 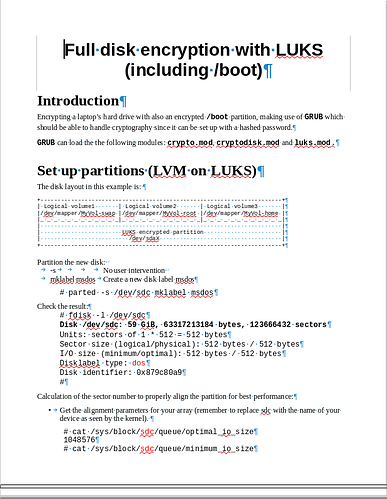 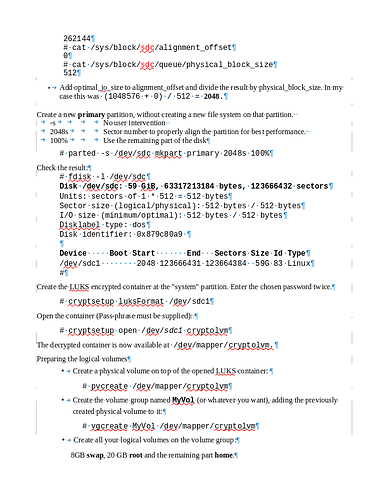 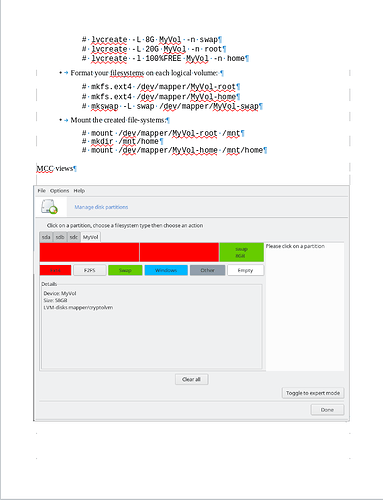 I have everything in a pdf but I don’t know how to add it to this post.

Anyway also here calamares is the show stopper. I can mount the newly created volumes as /mnt and /mnt/home. They also show-up in MCC but calamares doesn’t know how to handle them.

Isn’t there a way to bypass calamares and install a new system directly on the mounted directory /mnt?

A monkey can find links with Google. I don’t actually know much about encrypted systems/partitions and have never done it myself. The monkey also found this.

I am starting to play with this now. So far I know if I try to install say OM Lx 3.02 build # 913 and select ‘encrypt’ and ‘ext4’ for / and /home when I go to install Calamares then crashes during partitioning. But then I don’t know what I’m doing… Yet… So it must require more than selecting a check box…

Does anyone have Om Lx 3 installed and working with encryption?

Edit: Full Disclosure: I don’t hardly ever use Google itself rather one or StartPage, IXQuick, or less likely Duck Duck Go blow.

If I remember fine TPG fixed it some time ago.

You may also take a look here but select Primary instead of Extended.

As indicated in the first post of this thread, I have a working encrypted OpenMandrivaLx3 system by following the directions you gave me. My system has all available updates installed, has only two partitions (An encrypted ext4 root partition and an encrypted swap partition which doesn’t work). I created the system around 12 March, it works fine, besides the swap problem.