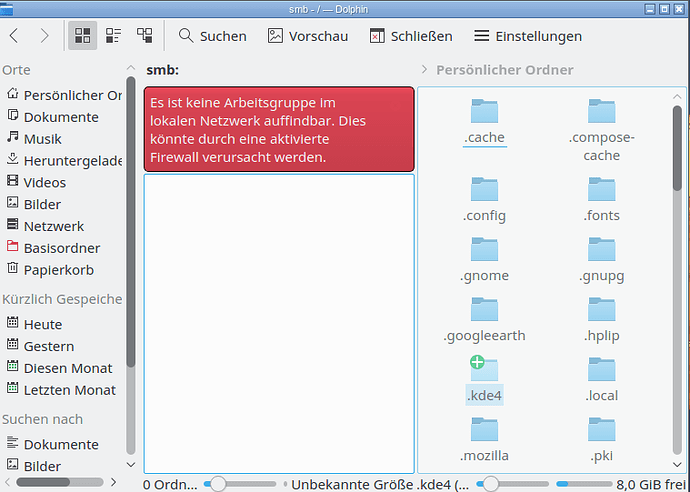 Indeed, functions(works):
smb: / “computer name”
and to me the shares of the concerning(relevant) computer are indicated(signalised) like
otherwise(but) under WORKGROUP.

and what about if you stop the firewall?

and what about if you stop the firewall?

Ok. without firewall WORKGROUP is showed.
What can I do for settings in firewall?

I only know this way, but I’m not a firewall expert:

You can set the firewall also with firewall-config

I guess you can do that from System Settings applet too.

Probably, firewalld-cmd should be written firewall-cmd (without the “d”).
The ports needed by samba are given here, at least for a simple configuration.
It’s easy to configure firewalld with firewall-config
Ideally, for a windows workgroup discovery, it should be sufficient to allow the incoming udp packets from the only port 137.
I don’t know how to do it with firewall-config, but in cli:

Note that the chain IN_internal_allow is defined by firewalld.

You can set the firewall also with firewall-config

Sure, sorry for the typo.

Ideally, for a windows workgroup discovery, it should be sufficient to allow the incoming udp packets from the only port 137.

Port 137/udp is open in firewalld config, but dolphin do not discover samba shares

But this is not permanent. With firewall-cmd:
firewall-cmd --permanent --zone=<zonename> --add-source-port=137/udp
This can also be done with firewall-config (thumbnail “source port”)
The result isn’t as specific however.

Anyway, firewall-config permits the choice of the zone for an interface. So, it is possible to choose the zone trusted to make the network discovery working.

ok. tested with source port 137/udp and it works!
thanks.

postedit: so it seems that source port 137/udp in firewalld->service->samba-client is missing

Then, what is the right command/procedure exactly?
So we can mark it as the issue solution.

Hmm, right now, I don’t see any reason to not add it.
Maybe, we could ask other people for more tests before?

Hello,
only the command

has no effect for showing WORKGROUP.

let me show the WORKGROUP.

It works also after Reboot.