For now users can hold off on updating until this issue is resolved.

FWIW: The packages are supposed to be signed when published to updates repo. It has been speculated by me and others that this is perhaps caused by ongoing changes in Package Management system due to the switch from urpmi/rpm5.org to dnf/rpm.org.

Edit: It is worth mentioning also that I am a package tester and have installed all the packages in question. So far everything works fine as far as I know. So AFAIK the packages themselves are fine this is just a temporary glitch in the system regarding attaching the signature to the packages.

Screen shot on a system with only one package to update showing the error (in Konsole): 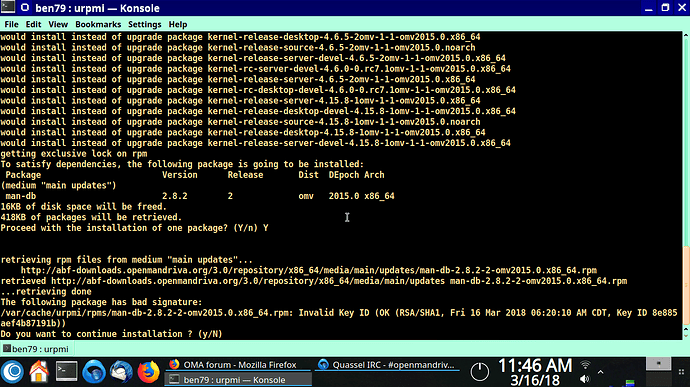 The noteworthy part is:

Note: I ran urpmi --clean -a before running urpmi --auto-update.

In the process of trying to get screen shots of this issue I’m running in to more weirdness than I first realized. Ummm, I’m looking and trying to pin down what I’m seeing.

OK, here’s a screen shot of the weirdness I was referring to. And note that this is on a system where kernel packages have already been updated. So I don’t know of any reason why urpmi is asking these questions. 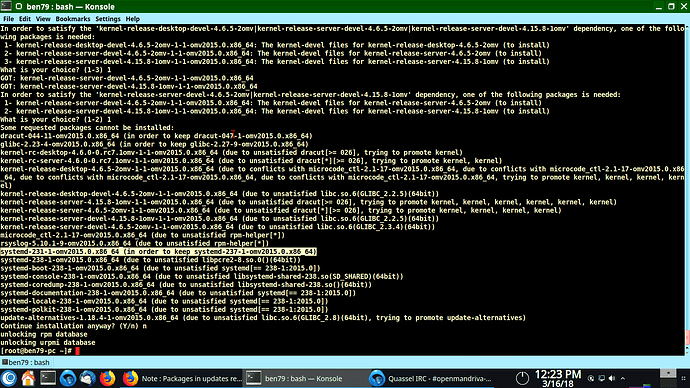 And then when you get to the “Some requested packages cannot be installed:” you see:

Hence the use of the word “weirdness”.

Is kernel 4.6.5 (and kernel server) what you really want?

Is kernel 4.6.5 (and kernel server) what you really want?

No, the kernel packages are up to date on this system (4.15.8). urpmi --auto-updates should not even be asking those questions AFAIK. And kernel 4.6.5 is ancient history. It was the ‘original’ Lx 3.0 kernel.

What is your choice?
1

What is your choice?

I only did that to show that the question keeps repeating. You can select anything in the list and it keeps asking until you select them all. Which is wrong. Don’t think I need to be a dev to say that.

Edit: And what I actually did was I aborted the update. Did not install anything because that dependency circle would be impossible for me to solve.

To clarify (perhaps I should have, you made a good point) here is a file with the entire output where the last selection is n for No Do Not Update. Also shows how many times it keeeps asking to install some kernel package or other which is weirdness. (And there is more weirdness after those).

Or am I wrong?

I have verified these issues exist also in a VirtualBox installation of OM Lx 3.03 (installed from build 1742).

Or am I wrong?

FWIW: Those using the current GUI updater (Discover) will (if they are looking at screen when it pops) see a small window that says:

but the error message does not stay up for very long.

So, here is the full log of todays update (right now) of my vbox machine from build 1915.
Previous update was yesterday.
I don’t see anything weird. But you may want to give it a look too.
konsole-agg20180316-full.txt (70,8 KB)

Don’t see anything weird there.

First thing users need to know is that the weirdness I saw is gone. Now longer a problem.

However, the issue with “Bad signatures/Invalid key” persists and a majority of packages showed this error. So I am changing the title of this thread back to it’s original.

Now why could this be.

Edit: Why I think it may be the second answer is because when I got the errors there were 144 packages to update, when it worked there were 183.

Believe it or not this has happened to me before. Which just shows what a lucky guy I am

People who do nothing are the most lucky

However, the issue with “Bad signatures/Invalid key” persists and a majority of packages showed this error. So I am changing the title of this thread back to it’s original.

Hope all our users appreciate all the work @TPG does for this distro. The sheer volume of work sometimes is just astounding.

Hope all our users appreciate all the work @TPG does for this distro. The sheer volume of work sometimes is just astounding.