Not happening here. Could you show exact command on command line you are using and screenshot of results?

Here’s what I get with: 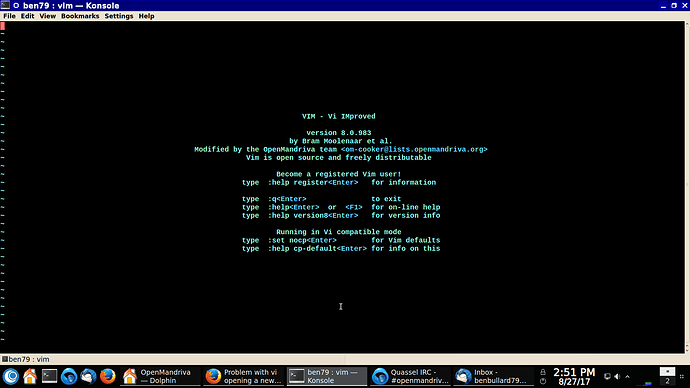 Most likely vim got closed that way. Try to delete all those characters and close with:

that is semi-colon then q then exclamation mark.

Here is my test: 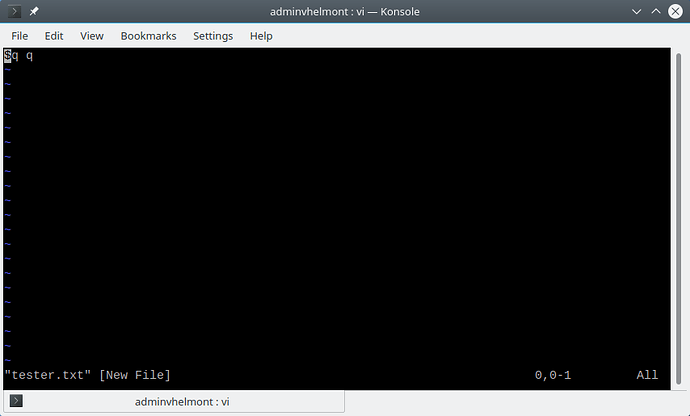 I can’t delete the $q q characters only overwrite them.

No errors here too! Try to check you configuration file.

OK, thanks for posting the info. When I do it that way I am getting that. I’d say it’s a bug and a bug report needs to be filed.

Doesn’t happen here, but since you can apparently see the characters but not overwrite them, my guess is you’re somehow getting false control characters (newline or color change being shown as “$q q” or so).
What is $TERM set to? Are you using konsole? Or xterm? Or ssh-ing in from another machine running something else?

What happens if you run:

I have the same behaviour. With konsole, xterm, qterminal, also in dolphin (F4 pressed).
It seems a leak of refresh, because disappears splitting the screen (vert or oriz) or increasing (decreasing) the characters.

It is printable also as .pdf or save output as .txt
but not overwritable.

By me not appear in root konsole, only in user konsole …
and

Good work. It does seem perhaps some kind of leak. If I open say:

Maybe some obscure configuration?
Try
cd ~
rm -rf .vim .viminfo
(If you have any intentional configuration in there, make backups of those files first)

After rm commands the behaviour is the same, unchanged.

Sorry for the late reply.

Thanks for opening bug report.

It may be a good idea to attach omv-bug-report.log.xz to the bug report.

Developers have requested that we attach that to all bug reports except package requests.