I downloaded Lx3 minimal version from OMV ABF on February 24th. Is it build 64? Anyway, it’s from https://abf.openmandriva.org/platforms/cooker/products/1/product_build_lists/64. I’m trying to setup a minimal OMV, probably not using KDE, to see how small can be an installation of OpenMandriva Lx (with a graphic desktop).

But the downloaded ISO cannot be installed.

First, before the bootloader menu appears, an error, in text mode, says:

Press any key to continue…

It’s not needed to press any key as after a few seconds the text disappear and the boot menu appears. As it’s logical, selecting “Start Live session” begins a CLI session. But selecting “Install” option gives the following error: 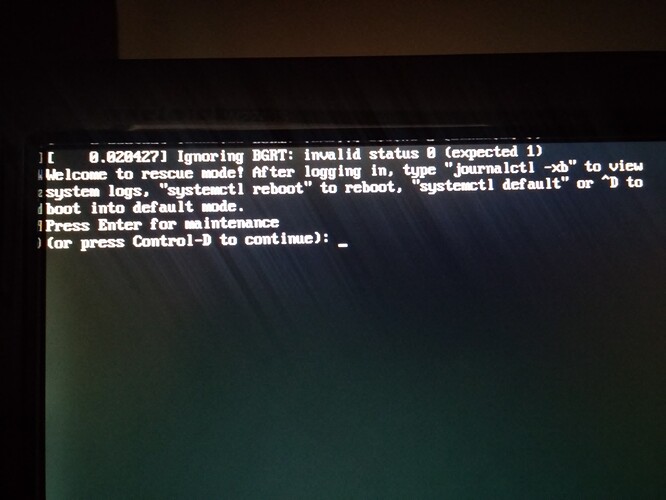 Pressing “Enter” gives a CLI prompt (there’s no root password, which it’s logic). It seems the same CLI prompt that selecting “Start Live Session” at bootloader. I don’t know how to install minimal from that CLI. So, how can be “minimal” be installed ? (I think that this version is “so minimal” that cannot be installed at all; if so, then the boot menu option should disappear).

A note: the first line of text in that screenshot (begins with “[ 0.020427] Ignoring BGRT…” is also visible when I select “Start Live Session”.

This image only for internal testing.
If you want to play with cooker just run it via docker
docker run -ti openmandriva/cooker /bin/bash

I think that it would be good to have a “minimal” installation so it’s possible to build for anyone a customized OMV.

For example, I would like to have a OMV with only Enlightenment or LXDE to install in a old machine, without the need to install KDE at first.

I don’t know if this is too much work added or not.