Today OM upgraded OM nVidia proprietary driver packages with the goal of getting packages that work with most recent kernel versions for Lx 4.2 and Rolling. However I do not have nvidia hardware so I can not test if the packages work, I can test that they will install. And usually if a package willl build and install it will work. So I know the packages will install but we need you to tell us if they work. The Lx 4.2 packages install and should work with kernel v. 5.11.12. The Rolling packages install and should work with kernel v. 5.12.7. The packages are available for x86_64 and znver1 systems only.

The real credit for these packages should go to the person that did the most work developing these for OpenMandriva @Colin (aka: itchka). Thanks @Colin.

To install the packages first you need the non-free repos enabled then:

Or if you use clang kernel:

Or if you use clang kernel:

Then reboot your system.

Please let us know if the drivers do or do not work. If they do not work please be descriptive about what the issue is. 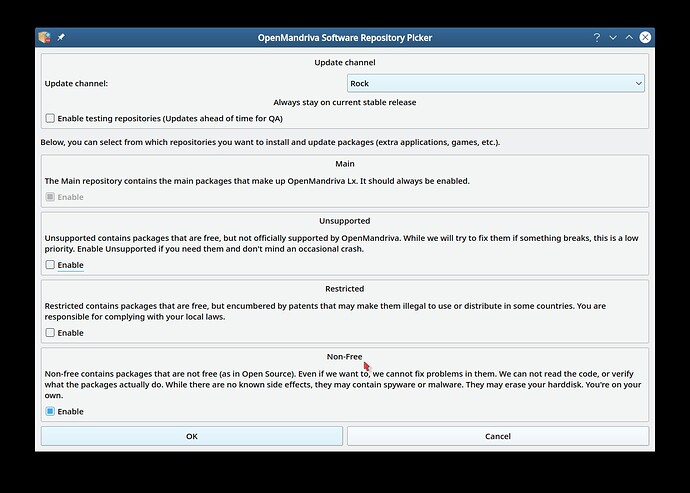 is kernel-znver1 a clang kernel ?

Not sure where that comes from? See this post.

so testing in wayland + kernel znver1 + nvidia 465xx ( Geforce970 video card) is ko
idem if i added clang
i lost gui after login ( blocked ) , no possibility to get tty ( Ctrrl+Alt+Fn do not work )

i have checked in console mode after , i see load driver nvidia red after nvidia-modeset , but nothing more in journalctl

There are specific modules packages for each kernel version:

i have this version

The nvidia-440 packages is a separate, older, and possibly obsolete package. I do not know why it is still in repositories. If you or any other user want an answer to that ask a developer on IRC. Most likely only @Colin (itchka on IRC) can answer this.

So at some point we will move the 470 package to “regular” non-free repos. This should happen approximately Tue. 2021-7-27. Unless we get some negative feedback on the nvidia (470) before then.