Hi to all,
in your opinion what is the easiest way to track upstream releases in an automatic way?
maintainers what kind of system uses for their pkgs?

After our private discussion I saw that

Every-day Anitya checks if there is a new version available and broadcast the new versions found via a message bus: fedmsg (More information on fedmsg for anitya).

Anyone with an OpenID account can register a new application on Anitya. To do so, all you need is the project name and its home page, the combination of both must be unique. In order to retrieve the new version, you can specify a backend for the project hosting. More information below.

I think every distro has its way to track upstream new releases.
I found something related Fedora, Suse and Rosa.

It would be interesting to know what use our maintainers.

It would be interesting to know what use our maintainers.

I am waiting for a response in IRC

I think every distro has its way to track upstream new releases.I found something related Fedora, Suse and Rosa.

What do Fedora, Suse, and Rosa use?

an answer, but not from our dev

joel_tess> Luca and I would like to know how you track upstream releases ? have you an automatic way ?
[18:34] joel_tess: there is a /usr/lib/rpm/perl script that can be used for tracking upstream releases. one does have to create the file that contains the upstream URL as well as write the patterns that match released tarballs
[18:35] the perl script is /usr/lib/rpm/vcheck, also contains doco.
[18:42] <joel_tess> thanks, can I publish your answer in forum here https://forum3.openmandriva.org/t/monitor-upstream-releases/451/3 ?
[18:49] joel_tess: sure. the script is rather ancient but works well if used with discipline
[18:50] <joel_tess> merci encore
[18:50] there is also a %track section in *.spec files … the idea was to store %track stanzas with packages so that one could do a rpm -Va and be told when there were newer versions “upstream”.
[18:51] never caught on because vendors took over updating from upstream
[18:52] <joel_tess> in real life you use it for omv ?
[18:52] all that %track doies is execute /usr/lib/rpm/vcheck with a blob of input. there is an example usage in the popt-1.14-1.src.rpm on the rpm5.org web site
[18:53] joel_tess: the script and functionality are in rpm5 used by omv. what omv uses is something else.
[18:53] ← plfiorini (~plfiorini@sei.yacme.com) a quitté ce serveur (Quit: Sto andando via).
[18:54] the script came from openpkg.org where it was used regularly
[18:55] <joel_tess> aha in fact your answer is very interesting , but I would like how breo,fedya etc do

What do Fedora, Suse, and Rosa use?

for Rosa there is this site

At Rosa tracker page they have written:

Unfortunately, we cannot support the service anymore. Sorry for inconvenience.
The suitable replacement for this tool will be available at github.com/lvc soon.
ROSA Laboratory, 21 July 2015.

Edit: So do we know what this distro is doing?

Hi Ben,
I just have not figured out, but sincerely I can live without it

I’ve added %track statements to a couple of packages I’m maintaining that I’m not paying too close attention to, but for a majority of packages, it’s simply on the radar anyway because I’m on the mailing lists for the projects. Also monitoring distrowatch.com for anything appearing out of date.

Some packages (such as anything related to KDE or LXQt) are always released at the same time, and we use scripts to update them at the same time (see GitHub - OpenMandrivaSoftware/kde-packaging-tools: Tools for auto-updating KDE packages ), so there’s no need to track the individual packages there.

So it’s a mixed thing…

Thanks for the interesting information bero. That’s good to know.

It compares package lists from most important distros and from upstream, providing a very nice html page with
latest version retrieved. 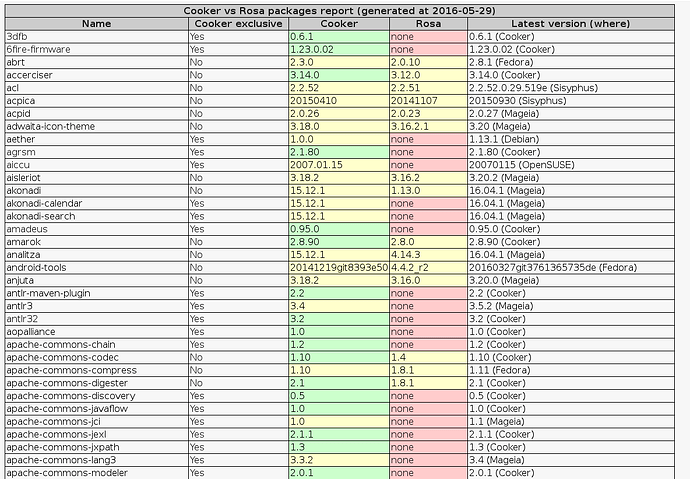 It can be executed also for single pkgs.

and/or for OpenMandriva 2014.2 this brand new build from @luca