Trying to check KMail to see if it really is working properly has me bumfoozled. After adding an IMAP account it shows all existing mails in Inbox but I can’t receive anymore e-mails as it complains of “Unable to fetch item from backend (collection -1): Unable to contact resource”

What am I doing wrong?

Full disclosure: I don’t normally use KMail as I find it unnecessarily complicated so this is me not knowing enough yet. But we need to be sure KMail is working… See the status bar at bottom of KMail window in screen-shot. 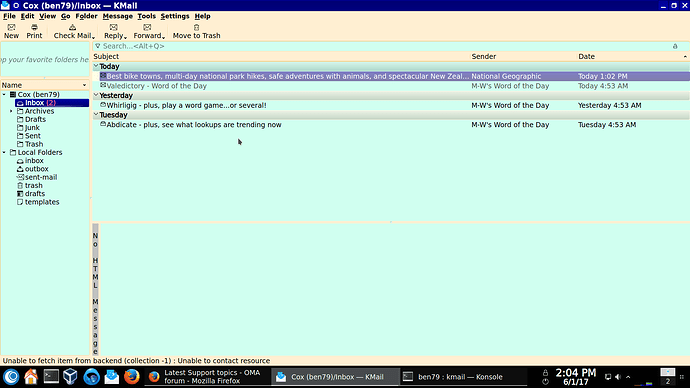 This is what output in Konsole shows

Turns out I needed to reboot system and now KMail seems working correctly. I guess that’s akonadi? I just wasn’t used to having to reboot system (or restart akonadi server or whatever got restarted) to receive e-mails.

Anyway as far as I can tell KMail is working properly and correctly. But this should also be confirmed by people that do use KMail and know what they are doing.