As title says. This is important because this is the ISO on our Mirrors and uploaded to SourceForge. Here’s some output: 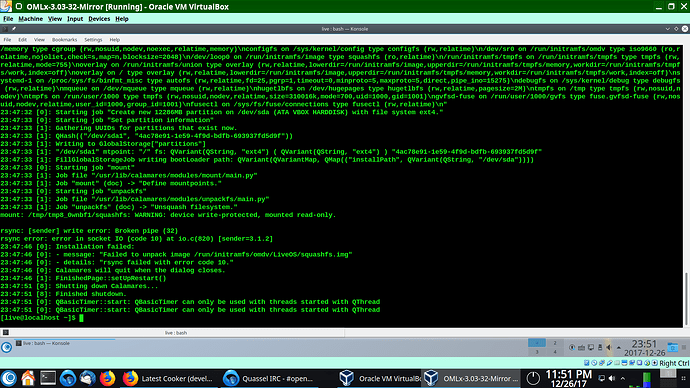 Hope I did not do something wrong.

Edit: Further attempts to install this ISO result in VBox completely freezing so I was not able to get anymore info. This is not an issue I’m going to want to spend much time on so if it needs to be fixed someone that actually cares about the i586 ISO will need to step up.

Tried also with ISO 1674 and that one froze up as soon as I started install.

But the MAIN POINT here is that if in fact our i586 ISO’s do not actually work then the responsible thing to do is get them off of our mirrors, torrents, and off of SourceForge.

Edit: And maybe they do work for some people or work on i586 hardware? I don’t know.

I didn’t say the ISO doesn’t boot I said it doesn’t install neither the one we released # 1587 or the latest #1637 will install.

That checksum is the md5sum for ISO 1587 which is the “Official” release. That is one of the ISO’s that so far is not installing for me in VBox.

Edit: I have procedures I follow for testing that involves among other things always checking checksums. That is checksums plural both the md5sum and sha1sum. That is one reason why we testers keep harping on developers always putting ISO’s in the expected location because that automatically includes the checksums and the build.log.

Ben, there must be something odd going on I was able to install the released iso both in EFI and BIOS modes and both installations booted without a problem. Is it possible that btrfs is interfering with proper VB functioning?

The out come of some hard testing and log gathering with @Colin and crazy is:

There is some kind of I/o issue with rsync in unsquashing files during install process. There are at present 3 workarounds:

Remember this applies to our most recent i586 ISO’s only installed in VirtualBox.

That’s what we know at this time.