I have problems with my nvidia card and nouveau driver : monitor and keyborad are freezed.

I need a working PC for developments, but I don’t need performance of nvidia card.
My PC has 2 video cards, the Intel video card of motherboard, and a nvidia card.

How can I update my current installation to use intel video card (and disable nouveau driver) ?
Or, how can I install OMV Lx 4.0 so that nvidia card is ignored ?

I had already the problem under OMV Lx 3.03, but it appeared only when playing video.
With OMV Lx 4.0, and no special action in a development context, keyboard and monitors are freezed, but PC is still accessible by ssh from another PC.

Just a precision.
With previous OMV versions, it was possible to:

I understand the choice to migrate configuration tools under new technologies.
Until this feature is migrated, how can we do manually the same steps (identify which driver to use with existing video cards, and configure it correctly) ?
It would be nice to have a list of steps with links to associated howto.

Just a precision.
With previous OMV versions, it was possible to:

I understand the choice to migrate configuration tools under new technologies.
Until this feature is migrated, how can we do manually the same steps (identify which driver to use with existing video cards, and configure it correctly) ?
It would be nice to have a list of steps with links to associated howto.

OpenMandriva is and always has been a Community distribution of Linux. The OM contributor group consists of about a dozen volunteer/part time people about half are actually developers. I don’t recall any of our devs having this hardware. I know if users expect developers to do this they probably won’t have time until we working on OMLx 5 or 6.

There are How To’s on this subject all over the internet but you need to adapt them to initial conditions in OMLx 4.0.

I wish I had a better answer. There are considerable advantages and disadvantages to being a small group. This is one of the disadvantages.

The Idea when OpenMandriva Association was formed back in 2012 was that community members would step up and do tasks like this. We have recently decided not to be shy about asking for help.

I agree and understand.
The point is:

you need to adapt them to initial conditions in OMLx 4.0

I already tried this approach in the past, using howto’s written for other distros. When howto’s are talking about files or exe that doesn’t exist on OMLx, it’s complicate.
I don’t have much time, but I would like to do it.
In fact, I need to do it if I want to continue working with OMLx.
I would like to write a How To for OMLx.

But I need some help, as I’m more a user of OMLx and I don’t know OMLx architecture (vs other distro).
Can anyone indicate which How To’s are prefered to follow and adapt ?
Or How To’s from which distro ?

I have a Live USB key with OMLx 4.0 burnt on it.
How can I boot on this USB key so that nvidia card is blacklisted and Intel card is used ?
I think the response would resolve the problem.
In my case, the BIOS doesn’t allow to disactivate the nvidia card.

This is to blacklist nouveau from boot parameters:

Append that to the end of the line in grub2-menu that begins with “linux”. Blacklisting nouveau or nvidia is something that is more or less common across Linux distros.

I think that might enable the Intel graphics to work.

For additional help on this issue and for help writing a how to it would be best to go to #openmandriva on Freenode IRC and ask there.

Ben, thanks for help.

I tried on my personal and professional computers.

I found a simple solution that worked on my personal computer:

It worked only in Legacy mode.
In UEFI mode, I reached to boot in live mode only with secure boot off, but then the hard drives were not detected (nvme ssd).

On my professional computer, I haven’t found a solution yet. But since last updates, the pc doesn’t crash anymore, I don’t know why.
I will try again later, and if I find a solution, I will post a new message.

but then the hard drives were not detected (nvme ssd).

This is a seperate issue and. There are workarounds for this under “Troubleshooting” in the ISO Grub2 Menus:

This one worked for me with a Samsung 970 EVO Plus NVME SSD: 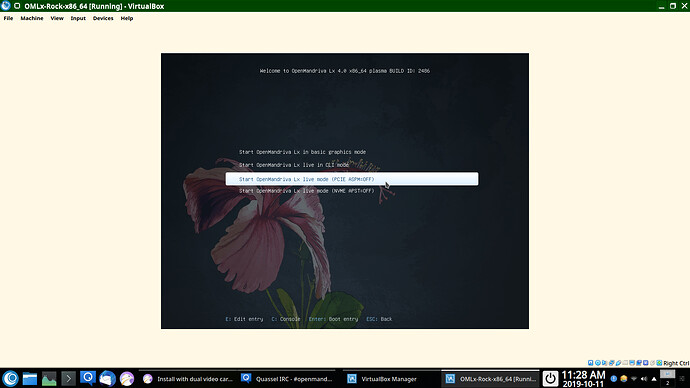 And this one is reported to work in many hardware combinations: 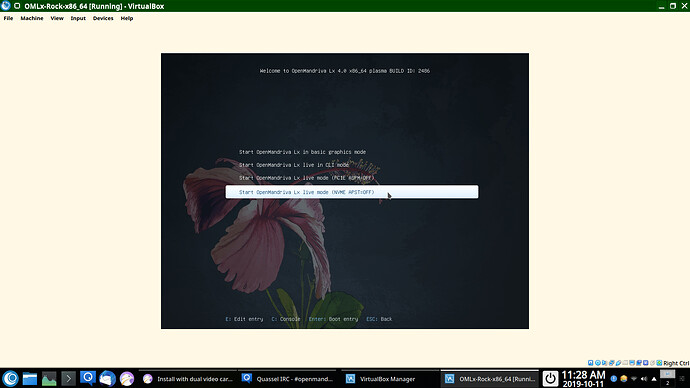 No troubleshooting mode has worked for me, the problem is always the same: when I arrive in live mode and begin install, the partitions on nvme devices are not detected. Installation is blocked at first step saying that there is no space for installation and no partition was found