How to upgrade Rock/OMLx 4.3 to ROME (rolling)

A fresh install is always preferred over a system upgrade.

Always backup your data before doing a system upgrade.

Warning: There have been a lot of changes in OpenMandriva Lx since Rock/4.3 was released. This procedure will take some time and user will see a lot of warnings and what look like error messages. That is a normal part of this particular system upgrade. If that bothers you then do a fresh install.

The different versions of OMLx are explained further here.

ROME (rolling) has been in use for well over a year and has proven to be as stable as Rock according to users and contributors.

Most in the OM contributor group believe most users will prefer ROME due to software packages being kept more up to date.

This “How to” is based on a very basic, default installation of Rock. Rock and OMLx 4.3 are the same thing right now. Also it is based on using only main repository and no third party repos. It is recommended to disable any third party repos for this procedure and re-enable them after you are done. 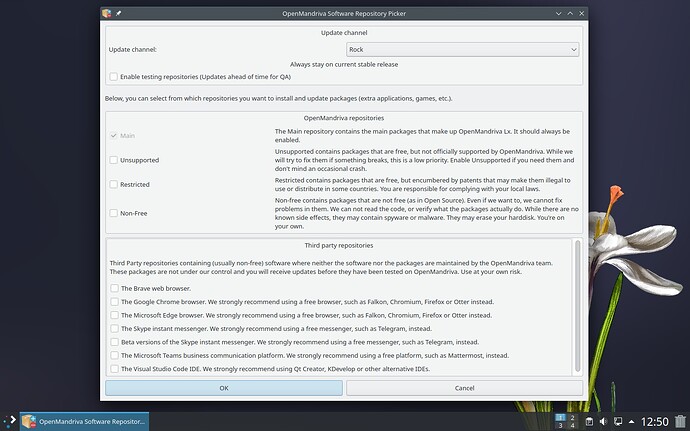 Important Note: Do not mix repos from different versions (update channels) of OMLx. Either use rock or use rolling repos. Do not mix them. You will have problems if you mix repositories. Never enable Cooker repos for a Rock or ROME (rolling) system. This will lead to problems.

Users that have done a lot of customizing to their system and/or who have installed a lot of additional software may encounter issues. Frankly there is no way to anticipate all scenarios of what a user might do.

Knowledge level required: Linux user comfortable with using terminal and basic Linux/Unix commands. You don’t need to be a system administrator or developer to do this.

Important: Before doing this read this post so you know what to do if at the end of the actual dnf dsync you see “==> Package distributor has shipped an updated version” so you know how to answer the questions that dialog will ask.

We start with a fully upgraded Rock/4.3 system. 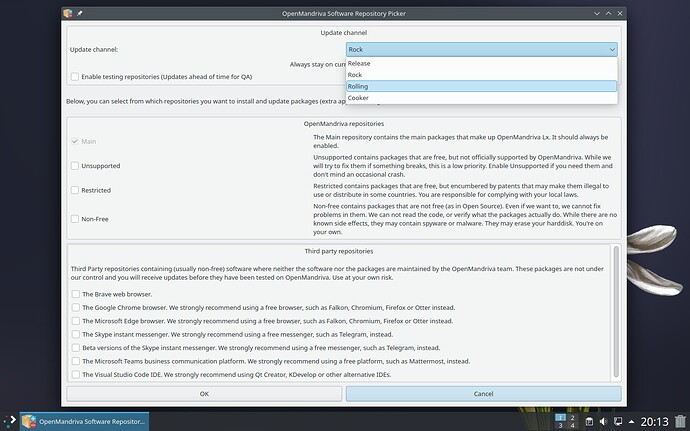 We do our best to keep ROME as stable as Rock. Over time there are considerably more software upgrades in ROME. The way OM devs manage things results in periods of time with relatively few or no software upgrades. Then there are times when OM devs copy what is in Cooker repos to ROME resulting in a large amount of software upgrades at once. We do try to inform users when this happens in this forum and in OpenMandriva News. This copying of Cooker to ROME is very carefully done.

If you experience problems after this upgrade consider doing a fresh install instead of trying to troubleshoot the problems.

Should you encounter problems and need help please post your question in English Support forum or contact us on OpenMandriva Chat. If you encounter any bugs report them on our issue tracker.

This is the artwork you should see in your new Rolling system: 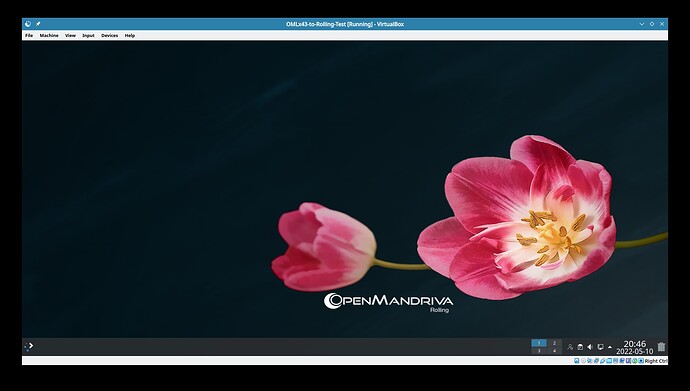