Due to blocking errors in my package system, I had to re-install LX4 “ZNVER1” version. Here are the failures I encountered.
Install from USB pendrive OK

1fst error: Repos are set to “Cooker” by default (should be in “Release” in my opinion) and when choosing “Rock” version => 521 packages are re-installed, among which, 6 are updated and 85 downgraded (thrilling to press “yes”!)… But, in the end of this process => the GPG key is nor recognized => the change of version fails, and the download is not installed.
The solution I found was to add “–nogpgcheck” at the command line …and all went fine.

2nd error: "dnfdragora did not open the 1fst time I tried to use it. After rebooting the PC, it did => consequence of the change of version? Probably.

3rd error: Kernel-devel and DKMS are not installed by default (if you need, like me, to compile a WIFI driver you must connect the rooter by cable) => but “lib64z-devel” has no signature and the install of the kermel-devel fails.
Resolved again with “–nogpgcheck”.

5th error: "Nothing provides “libsmpeg-0.4.so” when installing “PYSOL”
Besides: “pysolFC” (Fan Club version) is missing, when “pysolFC-cardsets” is in the repos.

All the rest is OK here, no more problems with the package system.

Conclusion: Everything fine with the system, but I cannot install my 3 favorites softs:
pysolFC,
cairo-dock,
gkrellm,
on this “znver1” version.

1fst error: Repos are set to “Cooker” by default (should be in “Release” in my opinion)

Yes this a major error and bug. It is known and developers are trying to get a new ISO built using the default repository which is Rock. So very good that you caught this and changed right away.

One question did you use the ‘dnf distro-sync’ command to make the change from Cooker to Rock. If you didn’t you should run that ASAP.

@D27 we appreciate the reports about things broken so we can fix them. In the real world of small group all unpaid volunteers some things will be fixed quickly and some take longer. Your saw with this issue that once a developer actually knew there was a problem is was fixed in about a day and 1/2.

We haven’t announced the Rolling version or the feature about being able to change between “update channels”. But the procedure is:

Then from Konsole run:

2nd error: with dnfdragora. Of course you need to reboot when you make such a major change to your system.

3rd error: Kernel-devel and DKMS are not installed by default. I don’t recall that they ever have been going back to Mandriva even.

Everything else you report should be fixed. To do this file a Package feature request at our Issue Tracker. Easy instruction here. There should be separate request for each package. (This is far more effective at getting devs attention than forum posts.)

It is not a secret that there will be more failed package builds with znver1 than with x86_64. If it is in the repositories and does not work we would like to know so we can move towards fixing. Obviously some take longer than others.

No, I didn’t. I just changed the repos version in the Picker …nevertheless, all went fine, I believe.

…Just been running the command now, here is the result: 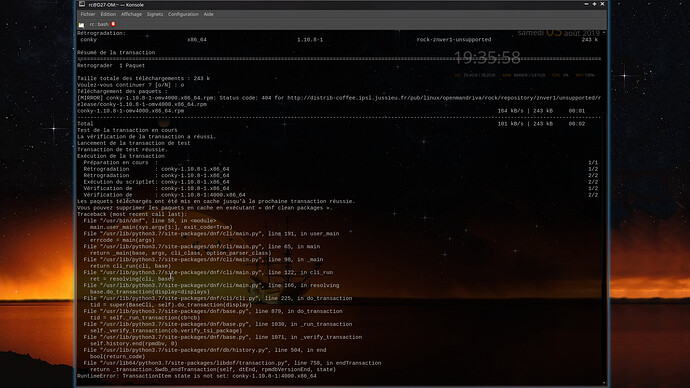 do this file a Package feature request at our Issue Tracker.

Yes, indeed, there may be a problem. Could you preface the command you used with “LC_ALL=C” and post the entire out put here in a .txt file? If you used ‘dnf distro-sync’ it would be:

Post-edit: Or just post the entire output here as code or post another screenshot. Which ever you prefer. Spectacle makes .png screen shots that are easy to post in this forum.

I started rebuild of conky for rolling and 4.0. I’ll let you know if the rebuild works.

Concerning “Conky” and the Traceback report I don’t see any change. Conky remains installed in “4000”.

You may note that “lib64glu1” appears now in “revision 21” in this report (remember it was the lib blocking the install of “google-earth”) => but if this revision is dully installed on my system, I have not seen any update (?)…
…And of course, I have just installed “google-earth” perfectly !
“Angry Pinguin” has mad a good job.

Concerning “Conky” and the Traceback report I don’t see any change. Conky remains installed in “4000”.

There would be no reason to see any change. LC_ALL=C is a command preface to force the output to computer language (‘C’) which usually is US English.

In this testing repository: 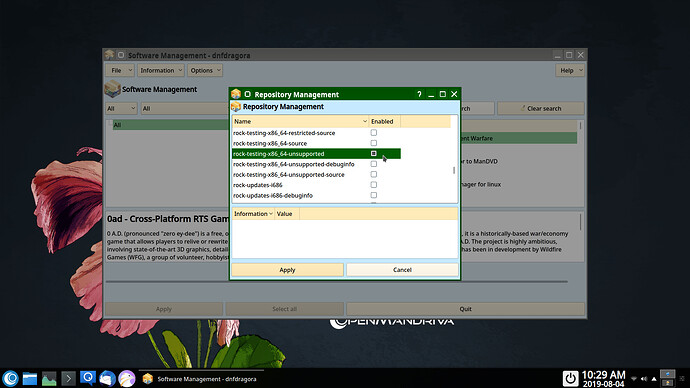 For gkrellm I was not able to get the gkrellm-plugins to build for znver1 and the nature of the problem with that is such that we’ll need to get someone more knowledgeable to fix that.

I don’t use any of these packages myself, don’t know what to do with a dock for instance. But here on x86_64 system cairo-dock and gkrellm appear to be working. pysolFC will work if I manually install ‘python-random2’ and ‘pysolFC-cardsets’. Again those fixes are in progress.

Oh, forgot to mention, there is also a new conky package in the unsupported/testing repository.

Hi Ben,
First I thank you for your efforts.
Second, here is the situation (after picking some packages in several abf.openmandriva repos):