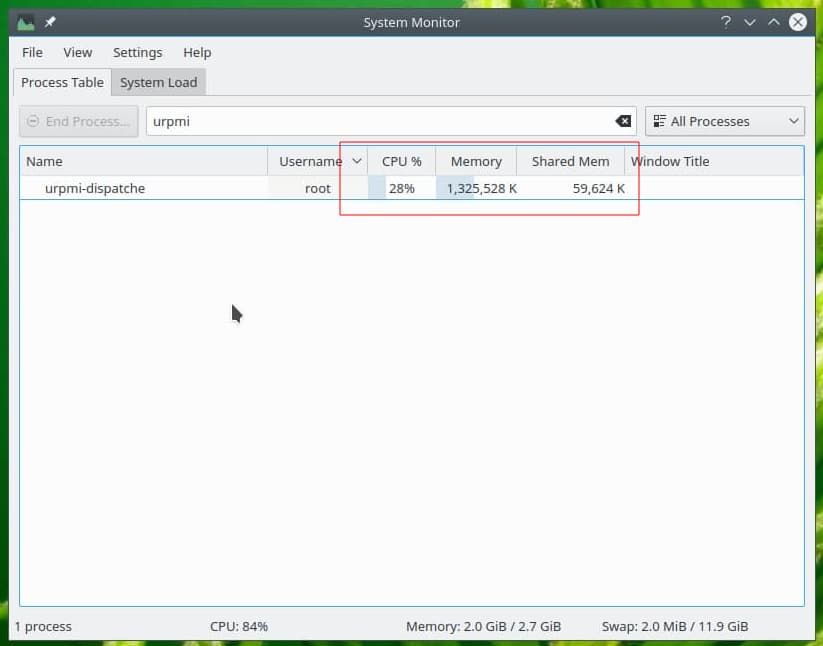 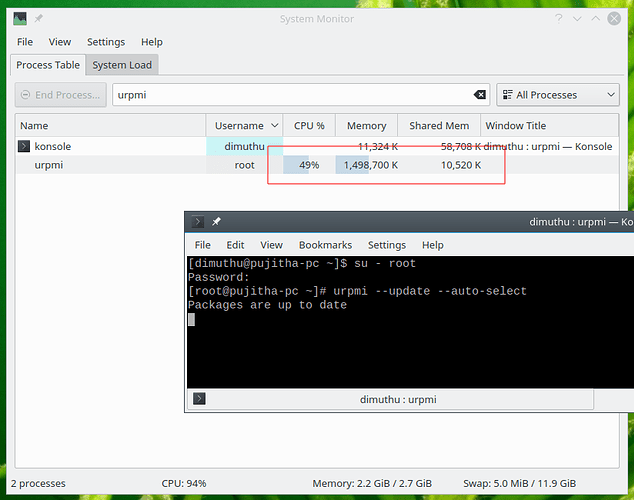 Those screens don’t look like they are from OpenaMandriva Lx 3.

Your post is not clear what are you trying to accomplish here?

yes. you are correct it is not from OpenaMandriva Lx 3.

It is form OpenMandiva Lx 3.02

See the CPU Processor and RAM usage. It is very high. PC get stuck if I open Chrome.

With out running any apps in the desktop. PC getting stuck

System Monitor is showing something running that is taking your resources. Only you (system administrator) can stop it. Click on urpmi-dispatcher and kill it. And if not yet stopped stop or kill urpmi as well. Then reboot.

Those screens don’t look like they are from OpenaMandriva Lx 3.

I was wrong about this that is the opening page of System Monitor or KSysGuard. No problem with that.

FWIW: If it were me I would kill those run away processes as soon as possible as in immediately. And then I would reboot.

Edit: FWIW2: It is easy to do. Simply open System Monitor or KSysGuard and select the offending/runaway process and right click on it and select >Send Signal>Kill. It may ask for your root password if it does enter it and done. Then to be safe reboot.

With that much RAM usage probably so. My admittedly limited understanding is that with default swapiness setting swap is only used when memory usage is really high. I’m sure @TPG or @bero could explain better than I.

It is rare now a days with default OM swappiness settings to see swap used at all in normal desktop or laptop/notebook usage.

It could happens if the machine doesn’t have enough memory, which, accordint to my experience, means less then 4Gb. I am not so familiar to Sysyem Monitor but according to the bottom bar 2MiB of swap was in use when the user launched chrome and 5MiB when the system become slow, What it is strange is this usually happens when a more relevant portion of swap is used but it may depends on other factors such as BUS width, CPU, cached memory , etc. However I am interested to an expert explanation too

I am not so familiar to Sysyem Monitor but according to the bottom bar 2MiB of swap was in use when the user launched chrome and 5MiB when the system become slow,

OK, what am I missing, in the above screen shots I see a computer with 2.7GB RAM and he’s set the filter to urpmi so the monitor is only showing urpmi and urpmi-dispatcher. Of interest is WTF is urpmi-dispatcher?

Edit: According to what is showing he or she is doing something wrong with urpmi or something in urpmi has messed up. The processes (urpmi and urpmi-dispatcher) needs to be stopped.

If I open Chrome PC will get stuck. 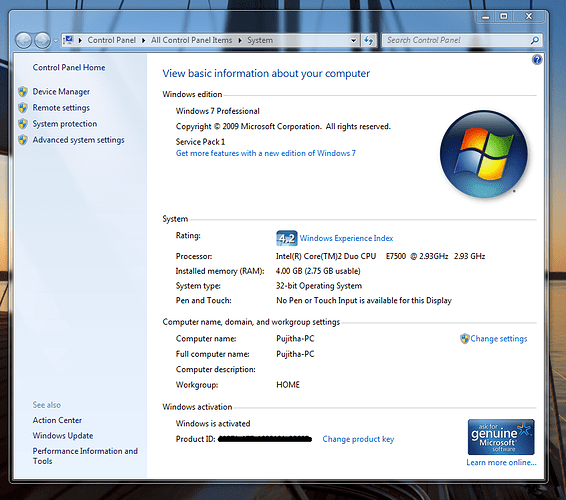 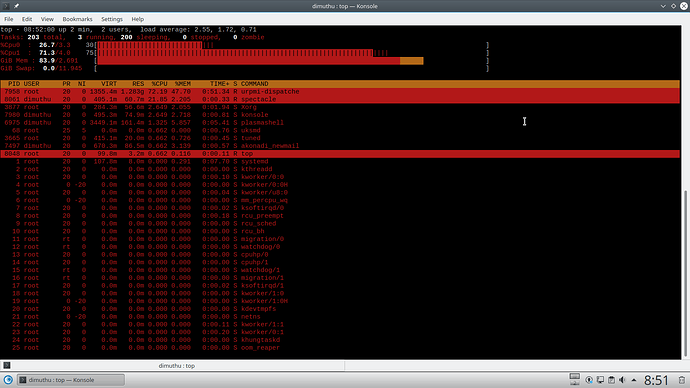 After the latest updates (Today 9.51 AM) no login Screen. Black Background and mouse pointer shows

Do this right now before you wear out your hardware.

pujithadimuthu: You have to do this, no one can fix this for you unless you take it to a computer repair store a pay to much money for something simple.

pujithadimuthu: What is ‘urpmi-dispatche’ and where did you get it?

After the latest updates (Today 9.51 AM) no login Screen. Black Background and mouse pointer shows

this right now before you w

I am doing it (Kill). But if i restart urpmi-dispatche starts again.

urpmi-dispatche no idea. I think it is the command for checking updates automatically.
If I kill it then PC works fine.

Please could you post the output of rpm -qf $(which urpmi-dispatche) ?