Discussion of ISO's for Lx 4? (Demonstration of flexable installer concept)

This was first proposed by @rugyada here.

I’m not referring to the so called “ minimal ISO ”, which only the devs are able to use, but just a minimal ISO as in the common understanding of the average-skilled users.

Ideally imho it should contain:

Well I have learned in this discussion in the Cooker forum and on IRC that relatively speaking I did not know much about “lightweight” desktops. Lightweight in this context can mean size of the installed system (that’s what I was thinking) or the size of the ISO itself. Then in reading I discover that to some people the important considerations are memory and cpu usage.

So far the desktops mentioned as candidates for a “Basic UI ISO” to give it a name are IceWM, openbox, fluxbox, and Lumina. I suspect any of these would do the job though I tend to think of IceWM in this role as I have long used it as a backup desktop. Some distros like openSUSE and maybe Fedora install it as a backup as well. As I remember it Mandriva did this but my memory about this and Fedora may be incorrect. In reading about the 4 mentioned here I start to think that Lumina might be as good or a better choice than IceWM. But I have not yet used Lumina so I’d need to try it first.

On IRC the consensus seemed to be that this Basic UI ISO should include a web browser. Falkon was the only one mentioned as it is most lightweight browser in OM repos.

The biggest feature of the Basic UI ISO, if we do it, would be not what it contains but what it does not contain.

Well Lumina seems to be with LxQt what makes sense, considering OM Lx seems to be promoting C++/Qt5 environment.

I also heard @bero, @tpg and @fedy talk about Hawaii/Papyros/Liri…

I also heard @bero, @tpg and @fedy talk about Hawaii/Papyros/Liri…

FWIW: @bero and @fedya were in yesterday’s TC-Meeting and those were not mentioned. I’ve never seen any of them to be actually functional. As far as I know they are all experimental. The 4 mentioned in my post and in TC-Meeting are all well know to work.

As far a Liri (Whatever it is, I don’t actually know yet) ‘lire-shell’ won’t install:

I can install liri-workspace and liri-wayland but there is nothing created to log in to on sddm login window.

Post -edit: For Lire with those 2 packages and their dependencies there are no sessions created in /usr/share/wayland-sessions or /usr/share/xsessions so I’m guessing there is nothing to login to.

I’m convinced by your demonstration, we can consider these environments as non working. I guess they’re too tied to their distribution.

We can make them work again – the problem is just that they use components of other desktops that got updated, but then the packages didn’t get rebuilt at the same time. The KDE updates (libKF5Screen) broke hawaii, LXQt (libQt5Xdg) broke liri.
Probably the next big set of updates shouldn’t be published until it doesn’t have regressions in repoclosure.

It seems to be quite complicated to have a working liri, maybe not worth the time/risks taken?

I’m transferring some posts from this thread to here in order to get this concept in front of a wider audience. And also am combining three threads into one as they are all essentially about the same issue.

Note: This is demonstration ISO created to demonstrate the concept of a flexible installer only. Also this in not a netinstall ISO. You are installing from disk or USB stick. This may be very important to some people where internet is slow and/or unreliable.

Post-edit: And a great big thanks to crazy (aka: Gabriel Craciunescu) for this test ISO. Thanks for the demonstration ISO crazy.

Post-edit: Also this is not exactly a basic ISO as @rugyada proposed except that the design of the Live environment is kept to a very basic level. As far as installing is is very customize-able and sort of fills the need for:

First in Live environment we can see this is in general a leaner system concept than current Lx 3 ISO’s. But remember user is not installing the Live environment user is installing package groups she/he chooses to install so installed system can be anything from no X server no GUI CLI only system to GUI system with multiple desktops with everything but the kitchen sink. 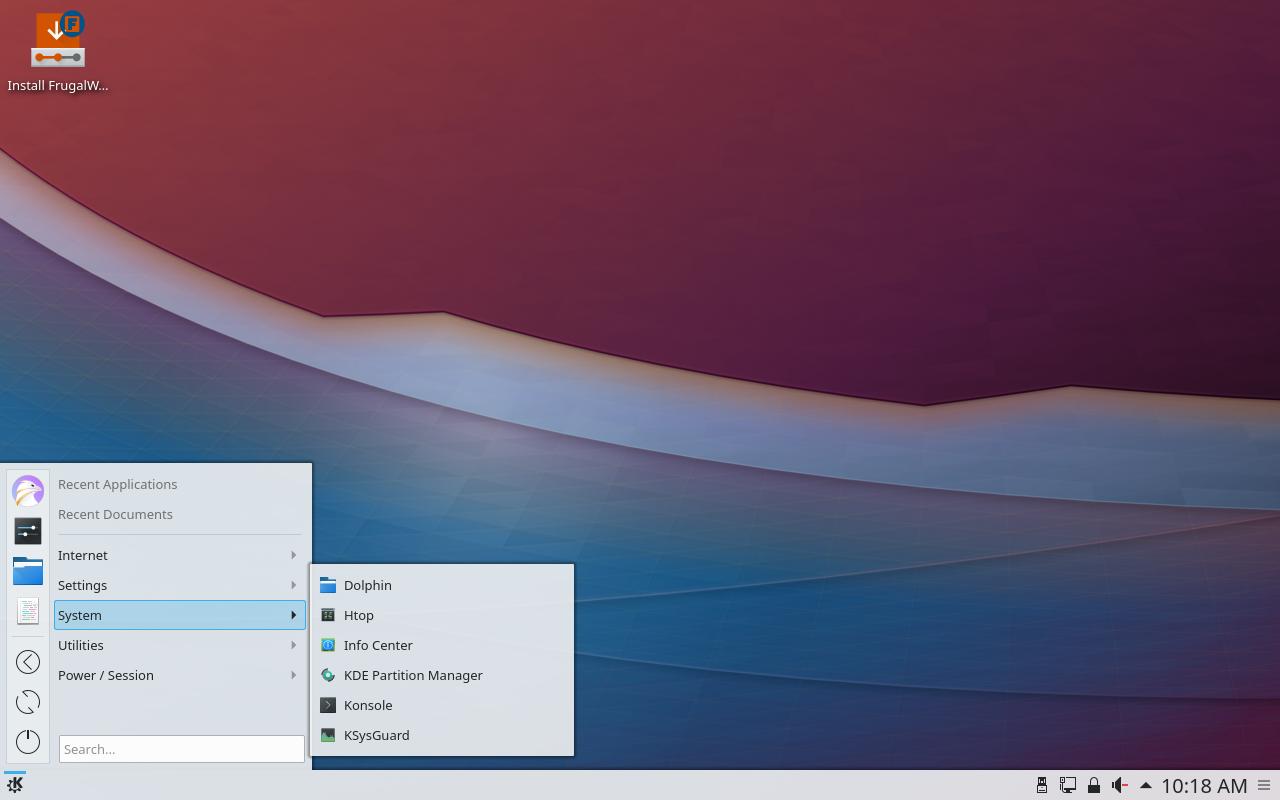 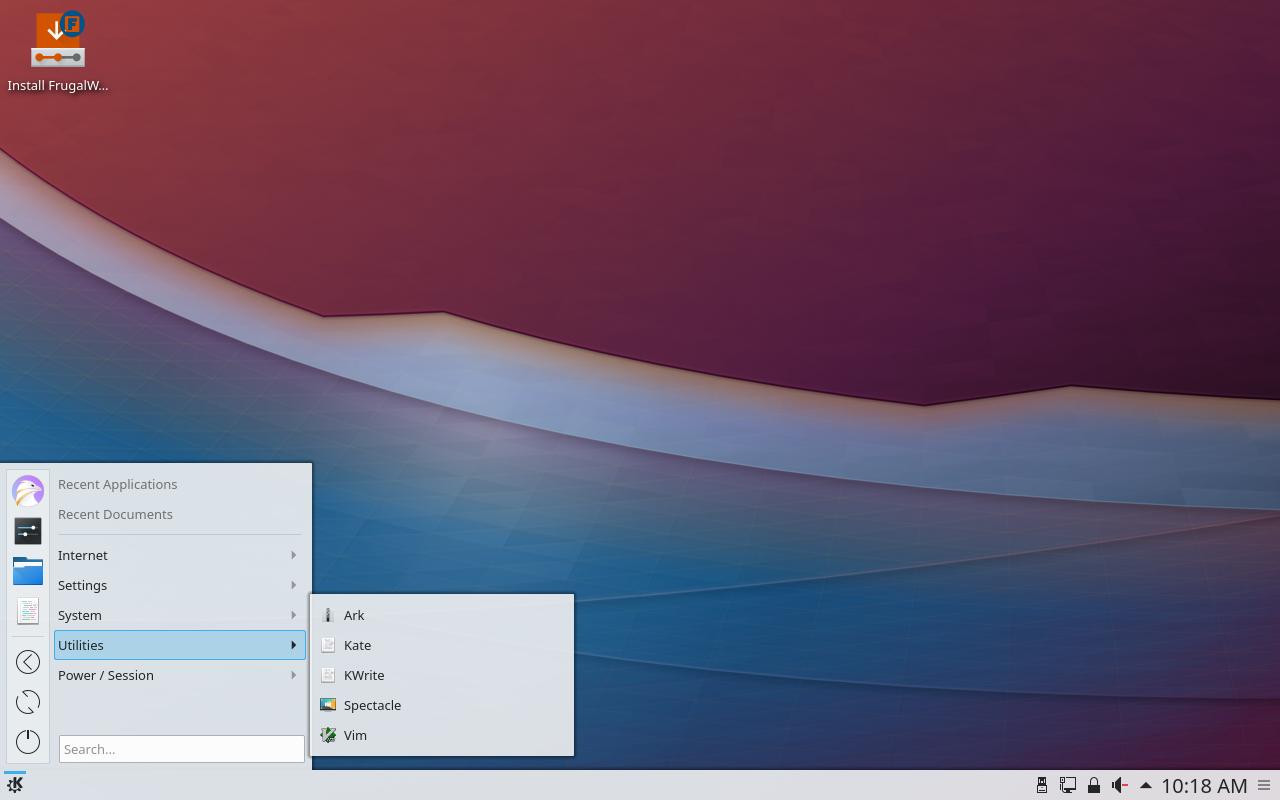 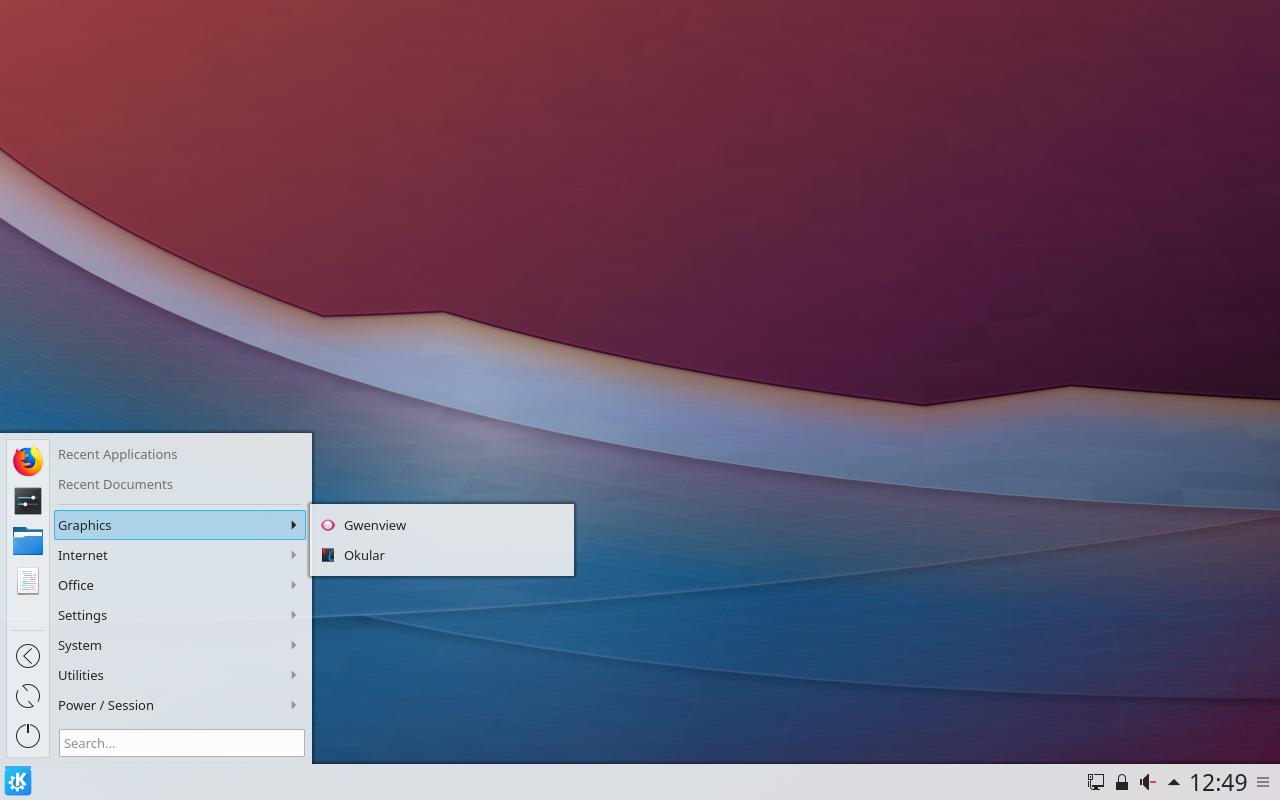 Remember folks this is a demonstration of a concept not a specific proposal.

Now let’s look at what I think makes this ISO unique and desirable for OpenMandriva to emulate which is the ability of the user to choose what they wish to install. And remember you still can install stuff after installing your system. Also note that the choices here are based on what crazy has available with FrugalWare not what OpenMandriva would likely provide. Our package groups would no doubt be different. For instance we probably would not have Gnome in our list unless we did something like “Official supported desktops” and Unofficial Community supported desktops". As I understand it the Official supported desktops for Lx 4 will be KDE/PLasma5, LXQt, and Lumina. If we do an ISO like this it is likely the LIve environment will be Lumina or LXQt. OK screen-shots: 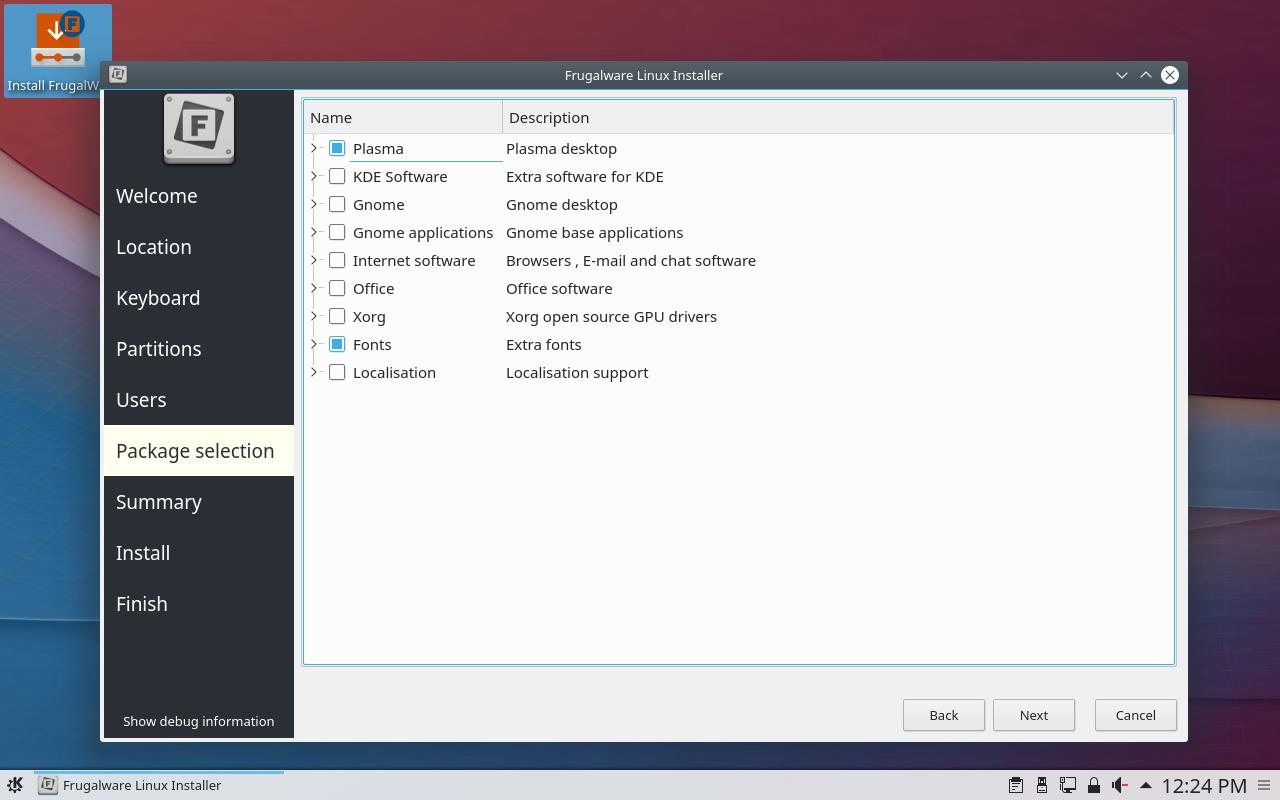 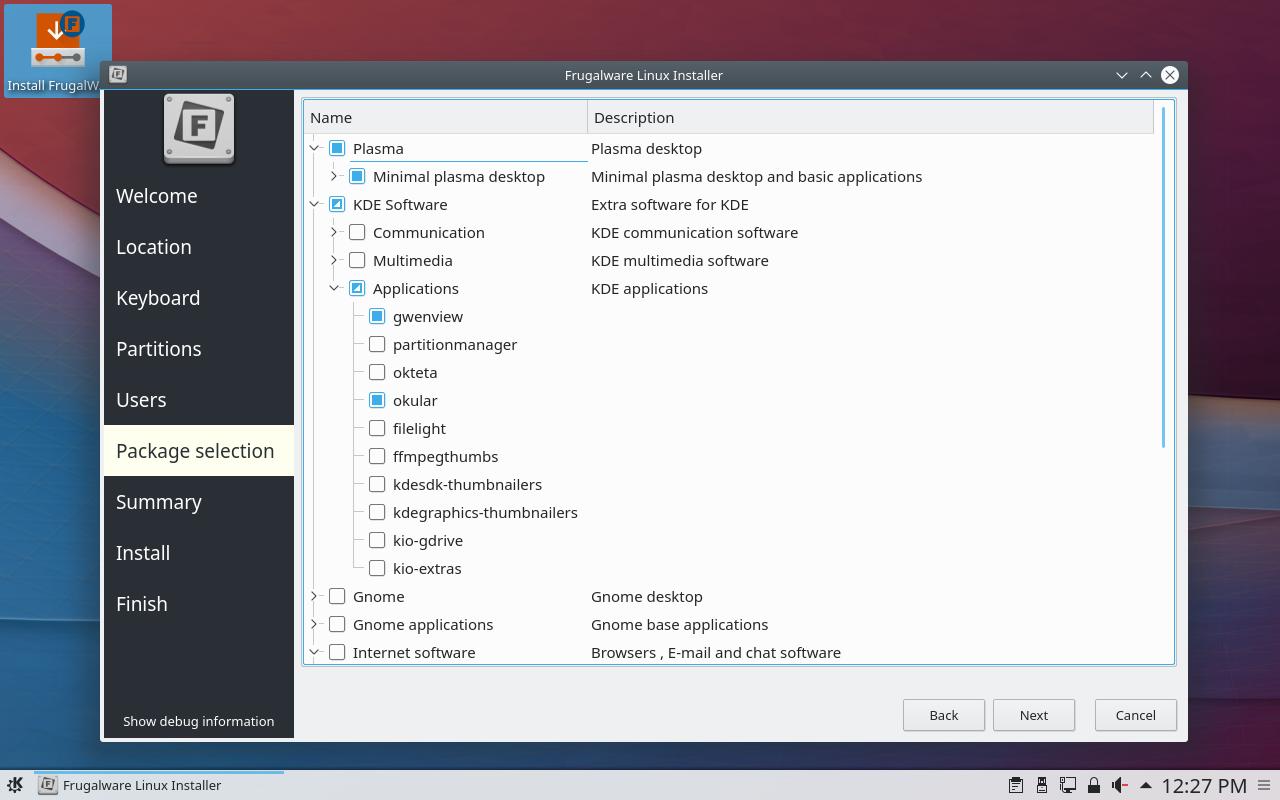 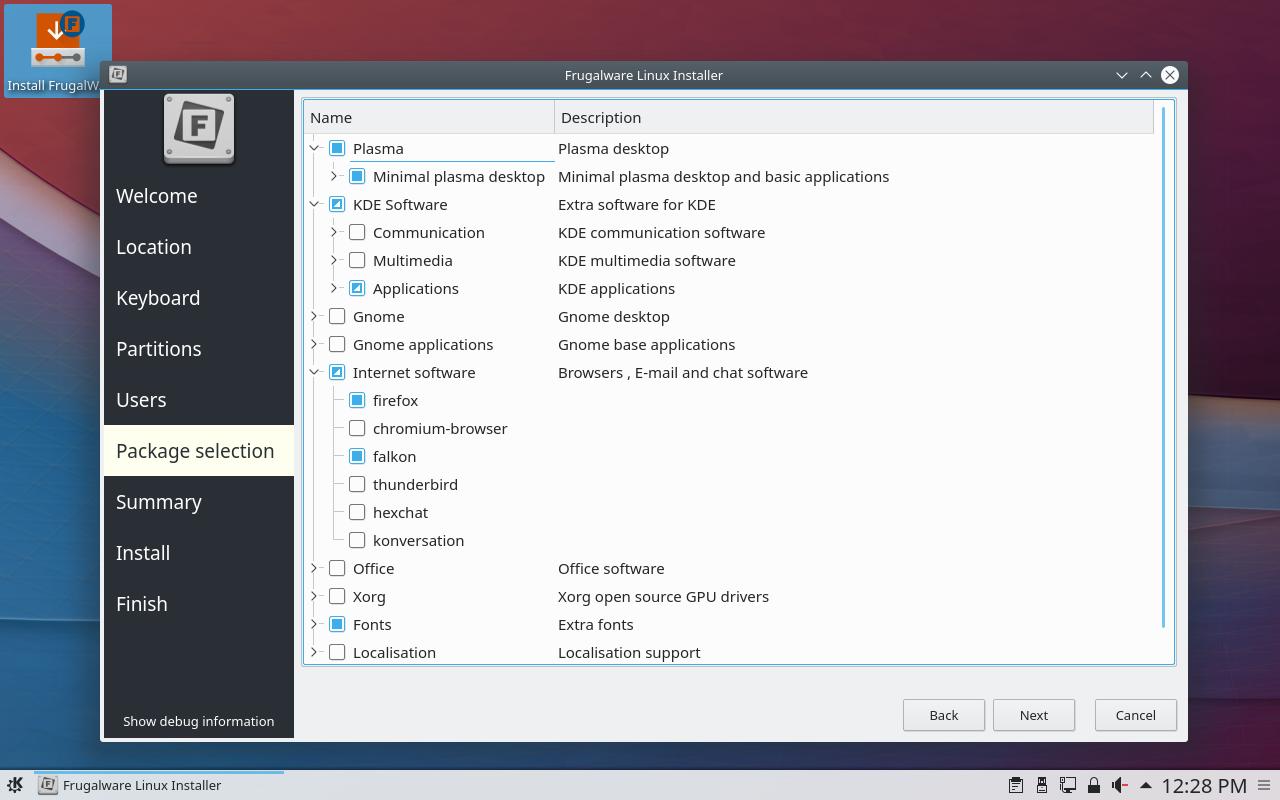 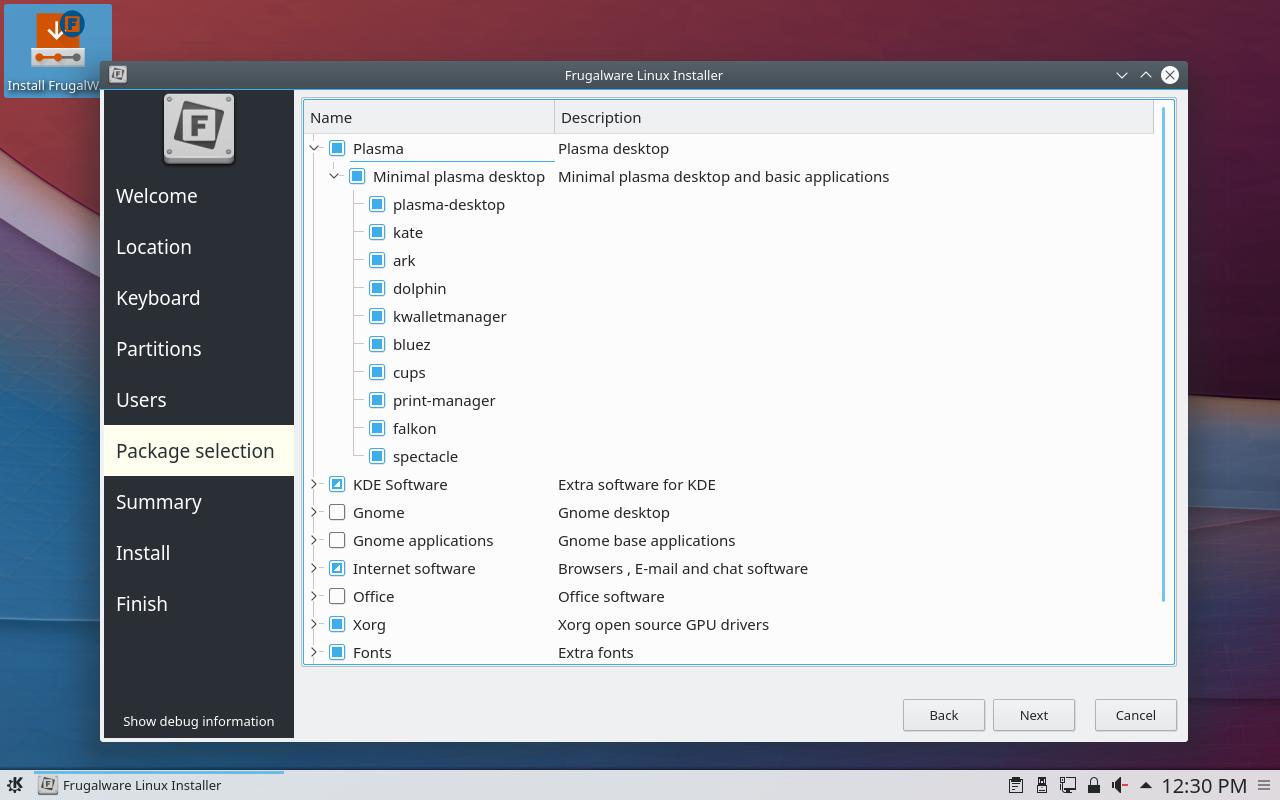 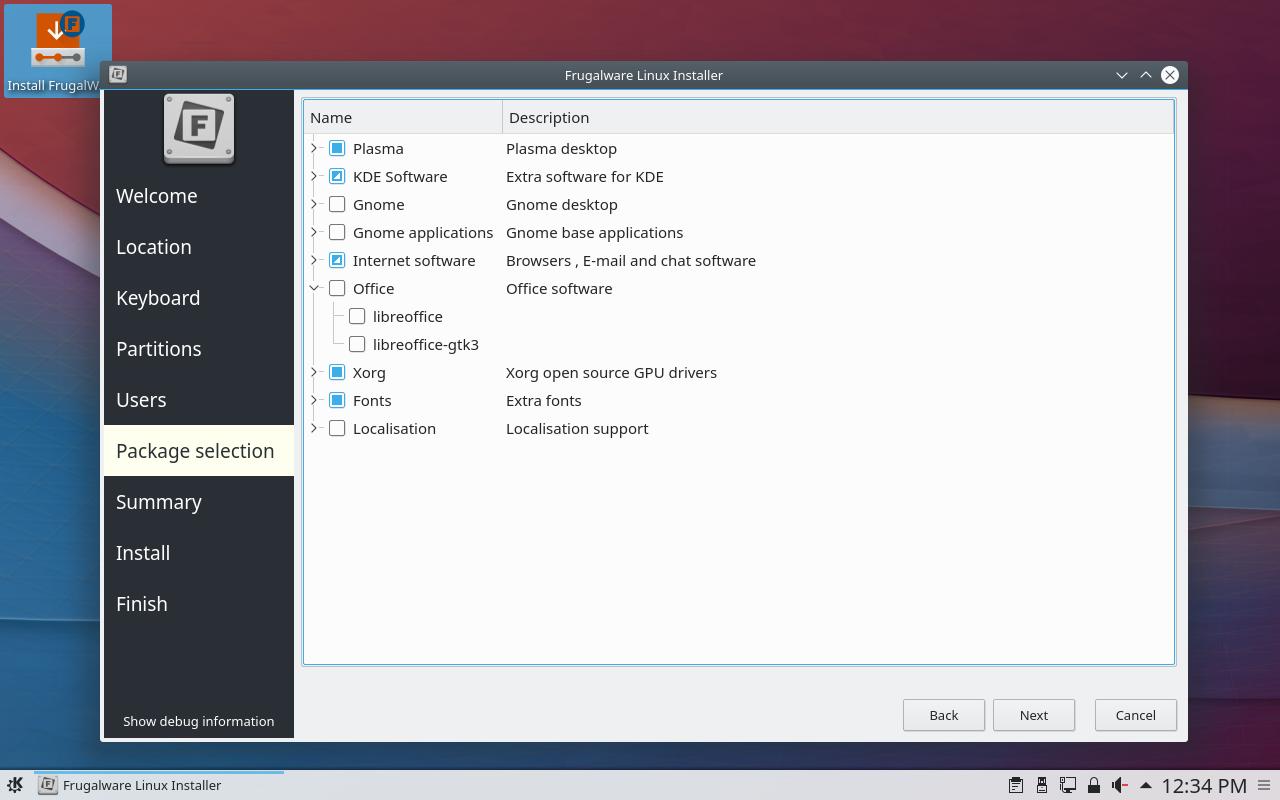 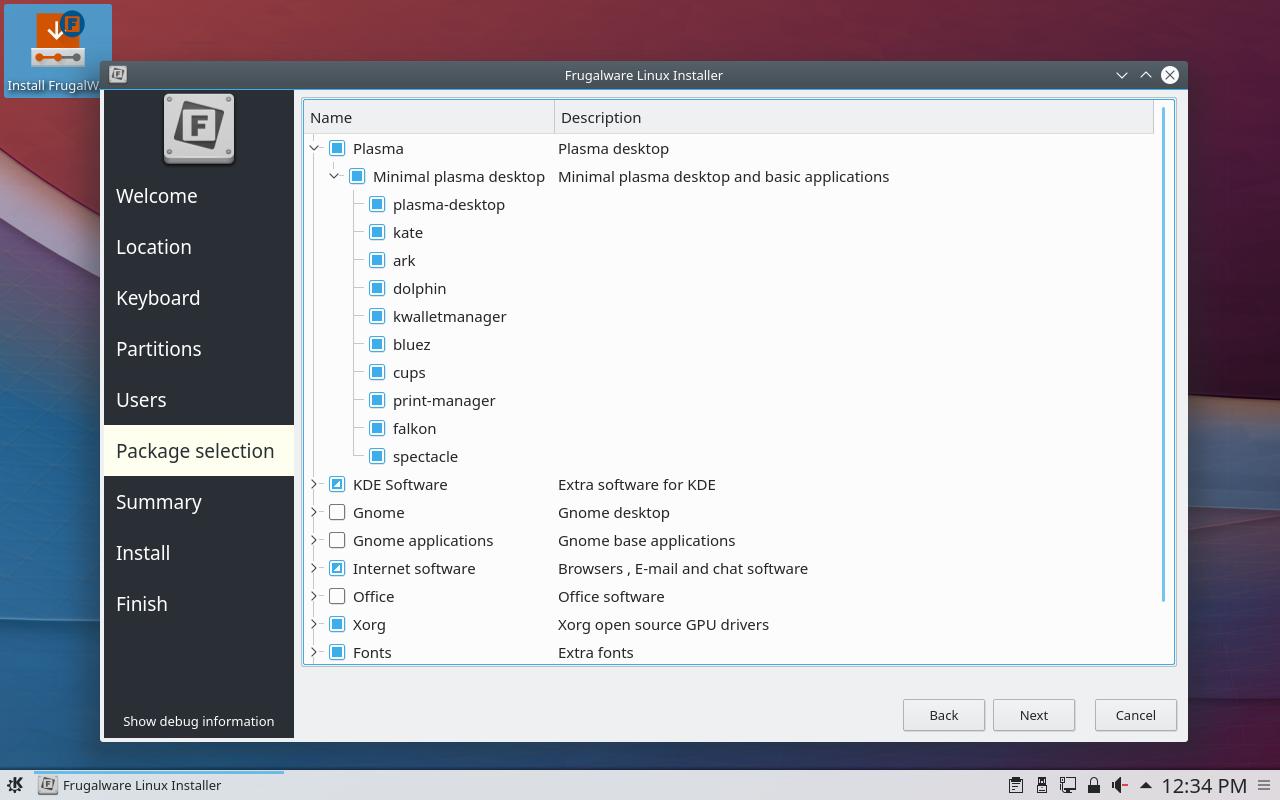 So if you want a no GUI command line only system you just deselect all the package groups and install and you’ll have a bootable cli-only system. This is useful for folks wanting to set up servers with minimal overhead and other such uses. Or user can install one or more other desktops plus the choice to install or not install other package groups. So user wanting a lean system might install only Lumina desktop or LXQt and forego say “Multimedia packages” and/or “Office packages”. So I think people can see that this is useful to have one ISO that allows users many choices of the size and type of system they wish to install.

So what do you think?

Post edit: Of course we can still produce one or two full featured ISO’s for users that find choice to be frightening.

This example is really close to my proposal and wishes (and Ben’s and other users’ too).

We can publish the full featured ISO, for reviewers and people wanting to have everything at once, and the basic ISO for people who want just a working base-system to be completed with only what they need.

Thanks for the screen-shots

Hello guys,
It would be interesting to have a minimal ISO option so that users after installation can choose which applications to use.

What has been decided is to have a 3 ISO lineup:

The flexible installer ISO concept is just that at this point though a lot of us would like to see it happen. No decision will be made until someone actually makes an OpenMandriva based flexible installer ISO. And as discussed so far the concept does include that the Live environment will be very minimal thus leaving more room for packages. Obviously what the user is installing is not the Live environment but a package list.

Post-edit: I’m basing this on discussion in TC-meetings. This has been discussed and agreed upon in multiple TC-meetings and agreement was confirmed in yesterday’s (2018-09-26) TC-meeting.

Post-edit: I would be remiss in not mentioning that things discussed and agreed upon on TC-meetings can be changed, added to, or subtracted from if there is a valid reason to do so. But as matters stand what I publish above is the current “Plan” for Lx 4.0 with open discussion about possibility of adding a flexible installer ISO at some point. But do keep in mind this flexible installer ISO concept has to be proved that it is workable first.

@ben79
Thanks for putting here what was decided at the meeting, it is good for the OpenMandriva users to know what is coming to the future.