I have a somewhat different problem to Telliev. My notes read as follows:

1st install attempt saw the .iso burned using either dd or Unetbootin from one of the Distros in the Garage (NOT YakketyYak for dd, may have been for Unetbootin). LIKELY Unetbootin, as there is the 6.25 version in YakketyYak.

The install seemed to go fine, installer appears to be Calamares.

Rebooted and got a very likeable Grub screen featuring identifying icons for the other Distros on the left side of the entries – circle of hands for Ubuntu, LM logo, and Tux penguins for the rest.

OpenMandriva took head of the leaderboard, but booted into nothing.

ACTION – Installed a spare copy of LM 18.06 ‘Sarah’ Cinnamon on 20GiB, to take over the leaderboard.

Blew away OpenMandriva, installed it using Multisystem which appeared to take, but reboot spooled out a lot of data fatally ending with dracut prompt

Same outcome as with Unetbootin. Note all the other Distros work from the OpenMandriva Grub menu, except I cannot add the LM 17.3 on the USB stick without access to OpenMandriva’s Grub “from inside”. 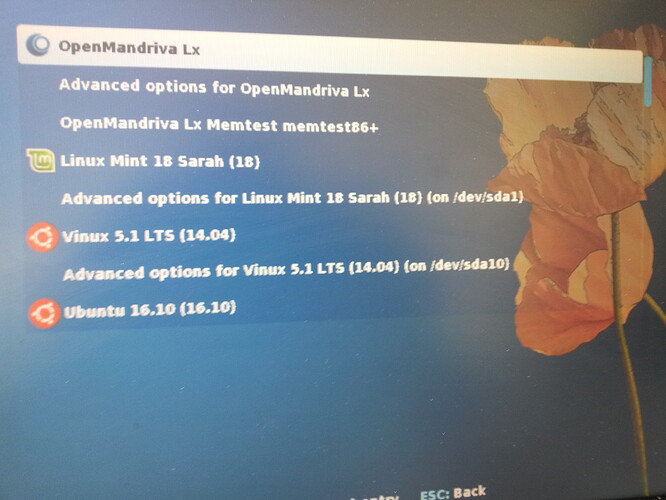 If these photos are too large I can modify size with GIMP if you tell me what is acceptable.

Can you please post logs, screen output, or anything that will help us to solve your problem ?